Share All sharing options for: Your Final Score of the 2010 Orange Bowl: Iowa 80, Georgia Tech 17

Hate to ruin the surprise, everyone, but we figured everyone should know the truth: Iowa is going to beat Georgia Tech by nine touchdowns in the Orange Bowl. Yep. It's true.

What's that? You're calling bullshit on Iowa racking up the single highest point total in bowl history? You don't think Cumberland's Revenge will actually take place?

Well, then. Allow us to retort. Because, if you haven't been paying attention to the FanPosts (and shame, shame on you if you haven't), you've missed the most interesting subplot of the entire bowl season thus far, which is this: Iowa is going to fucking murder the Yellow Jackets. We know this because of the superlative website WhatIfSports, which provides quality reconstructions of theoretical matchups between teams, regardless of year and all that.

Now, you might look at the box score and think to yourself, "well, in WIS's eyes, after Iowa ran up that quick lead, Tech just let Josh Nesbitt throw the ball all over the place and disaster ensued." That's a decent inference, except WIS had the complete and total opposite idea: 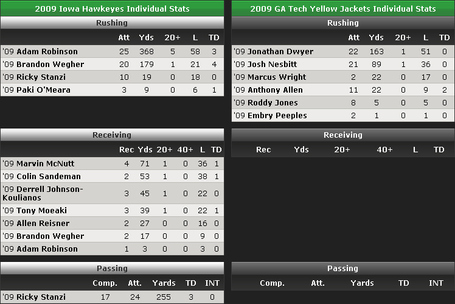 Yes, sure enough, What If Sports predicts that Nesbitt won't throw a single pass all game long. And why would he? As we've previously established completely by way of our own testimony, the Iowa defense is fast, so that completely erases any notion of even trying the forward pass, no matter by which how many points you're losing.

Something our more eagle-eyed readers might notice is that this simulation supposes one simple condition: that Iowa puts together the single most dominant rushing performance in modern college football history.

After all, Brandon Wegher is allegedly the most scoringest player of the game, registering 179 yards on 20 carries and 4 TDs. By themselves, those stats would certainly seem to be the type of numbers that would swing a game in Iowa's favor.

All in all, here's Iowa's projected production for the night, compared to Georgia Tech's: 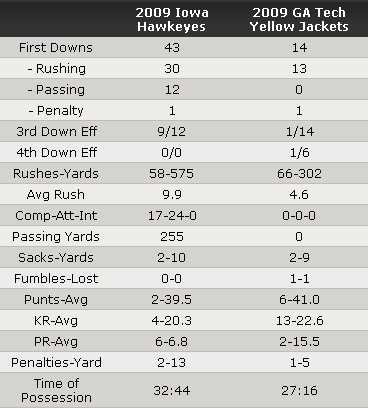 Yes, 43 first downs. In one game. That's how comically inept the Georgia Tech defense is, people! Iowa can literally register more than 10 yards per snap, which means any failure to gain the first down after two snaps is merely an exercise in perverse curiosity.

Our favorite aspect of all of this, aside from what we've already introduced (mainly, that Iowa will score as many offensive touchdowns against Georgia Tech as they did in the last half of the Big Ten slate (and that includes the six scored against Indiana)), is that Kirk Ferentz will absolutely not even entertain of calling off the dogs. After all, witness what happens after halftime: 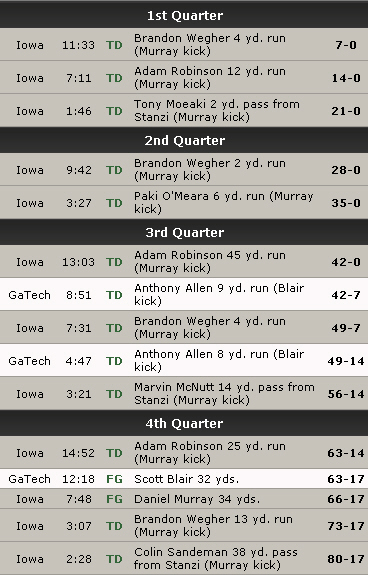 Okay, as long as you didn't throw a Molotov Cocktail through your monitor in protest, you might notice something a bit off about that 4th quarter. Mainly, that there are names that you recognize from the 1st quarter.

Our favorite performance is by Ricky Stanzi, who's seen throwing a deep bomb for a touchdown with Iowa up by literally 8 touchdowns and three minutes left in the entire game. If you don't call off the dogs there, you literally have no idea what "calling off the dogs" means or entails. And what's even better, it's on a flea flicker. No, that's not explicitly mentioned anywhere, but it's in a universe where Iowa leads Georgia Tech by 56 points in a football game and the starting quarterback is still in the game; why wouldn't they run the flea flicker to the post route?