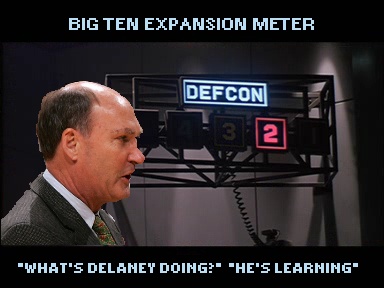 Remember the "back burner" talk of the Big Ten adding a 12th school?  It's not so implausible anymore.  This is what happens when expansion stops being hypothetical and starts getting real, per Teddy Greenstein at the Trib:

According to a league official, the Big Ten will release a statement Tuesday saying the matter has moved to the front burner.

The first sign of change came from former Wisconsin coach Barry Alvarez, who told Wisconsin's athletic board on Friday that Delany "is going to take this year to really be more aggressive about it. I just think everybody feels [expansion] is the direction to go, coaches and administrators."

A league source on Monday cited a "growing groundswell" of support among athletic directors for expansion.

The candidates have been debated since Penn State joined the conference 20 years ago, and have been beaten to death by the Big Ten blogosphere in the past few years (most recently, and most thoroughly, by We Will Always Have Tempe).  We know the usual suspects: Notre Dame, Pitt, Syracuse, Rutgers, Missouri (who, according to a post at the Kansas City Star, would be open to the idea), etc.  Things to keep in mind if this, in fact, goes down:

(1) NERDS!  Regardless of what is said, here and elsewhere, about a Big Ten Championship Game as the holy grail, no expansion will take place unless the eggheads approve.  Unlike the Big XII or SEC, the CIC (the Big Ten's academic arm, which includes the 11 member schools plus the University of Chicago) holds veto power over any choice, and will freely exercise it over any institution it deems unfit for entry.

(2) NERDS! Part Deux.  There has been extensive discussion of U.S. News rankings (or this guy's inexplicable reliance on Nebraska's number of Academic All-Americans) when comparing possible expansion candidates' academic standing with the rest of the conference.  This is not the proper metric.  The CIC is not primarily interested in undergraduate program rankings, as undergraduate programs are secondary to their goal: Research.  If a school is to be accepted, it must have a vibrant graduate program churning out high-quality academic research.  In fact, it's this criteria that makes some people think Notre Dame, a fine academic institution but not research-heavy, might not be the white knight that the athletics fans believe it is.

(3) The Old Guard.  OPS detailed it earlier this week, but it bears repeating.  The Big Ten is not about to give up tradition for the sake of expansion.  That means Michigan will play Ohio State and Michigan State, Indiana will play Purdue, Illinois will play Northwestern, and the Iowa-Minnesota-Wisconsin troika will take place annually.  This puts a serious kink in any plan to split the conference geographically should another eastern team be added.  Some have suggested an ACC-style split, based less on geography and more on historical power, but such a split would still demand UM-OSU-MSU be placed in the same division, requiring Penn State to either join them and tilt the scales in the east's favor (and, as entertaining as the thought may be to Iowa fans envisioning annual championship game trips, would initially create a Big XII North situation) or give up the land grant trophy (I know that's not a dealbreaker) and join the western teams (which might well be one, given the potential travel issues).

(4) Get Creative.  Did you know Texas almost joined the Big Ten fifteen years ago?  Had it not been for a moratorium on expansion post-PSU and some serious questions over travel expenses (questions which would be less of an issue today, as income from revenue sports grows exponentially and travel costs fail to keep up), we could be playing in that behemoth of a conference today.  The knee-jerk response is to list the institutions in border states which might meet the criteria, but don't be surprised if the final selection is someone outside the current list of candidates.  Probably not Texas, but someone of that ilk looking to improve their standing academically as well as athletically.

I've learned not to get my hopes up, but Teddy Greenstein doesn't have a history of making empty threats.  It looks like this could finally go down, making it the most entertaining offseason in recent memory.