For years, the Big Ten has been struggling with just what the hell to do about the whole "11 team in the conference" thing. It's made the BXI a bit of an anomaly, being that it's the only I-A conference without either a conference championship game (SEC, Big XII, MAC, C-USA, ACC) or a round-robin schedule (Big East, Pac-10, MWC, WAC, Sun Belt). After all, when it comes to automatic bowl bids, you'd want the conference to, y'know, pick the right team, right?

Well... maybe not. As Jim Delaney will be more than happy to remind you, the Big Ten has this funny habit of sending two teams to the BCS nearly every single season--and grabbing more of that filthy BCS lucre. So until a championship game nets as much money as a second BCS bid (a little under $5 million for the conference for the second team) or the conference slips enough to stop consistently sending the second team, the impetus isn't exactly strong to expand.

Barry Alvarez didn't get that memo, though; according to ESPN, he's priming Wisconsin for the prospect of having another baby in the family:

Speaking to Wisconsin's athletic board on Friday, Alvarez, the former longtime Badgers football coach, said the conference already has investigated possibilities for expansion "from all over the country." And though he places no timetable on the search, Alvarez thinks conference commissioner Jim Delany will respond to a group of athletic directors and coaches who want expansion.

"I have a sense he is going to take this year to really be more aggressive about it," Alvarez told the board. "I just think everybody feels [expansion] is the direction to go, coaches and administrators."

All of this makes lots of sense; when teams miss two fellow conference members a year on a weird rotating schedule. A 12-team, two-division setup would simplify matters dramatically and eliminate any prospect of a 2002 scenario (and yes, we know OSU won the title; Iowa would have smoked that Buckeye team).

But if it were that cut-and-dried, it would have happened already. And there's one screaming bulletproof bitchgoblin of a problem in front of the prospect of expansion: logistics.

Here's a map of the Big Ten members: 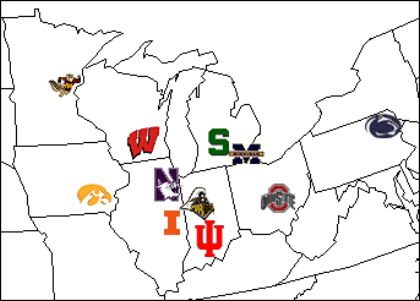 There's a pretty obvious geographic division inherent in this setup; we've used the modern power of "Computer Internet" to make it more conspicuous: 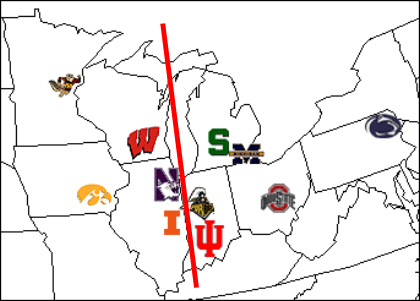 Yeah. That's five to the west, six to the east. Moreover, there's really no moving that line east without disrupting the Michigan or Indiana rivalries. That's straight out of the question; Jim Delany may be ambitious, but he's far from an idiot.

Thus a problem: the most natural candidates for expansion are teams like Pittsburgh, Notre Dame, Syracuse, Rutgers. Cincinnati or Kentucky if we're drunk enough to tell ourselves they'll work on academics. And they're all on the east side of that divide. That line might as well be a Berlin Wall. Go ahead, try to add any of those teams and show us where the new line is.

On the west, though, there aren't nearly as many possible candidates; moreover, they're basically all in the Big 12. So unless we want to bump Marquette or Wisconsin-Green Bay to I-A (err, FBS or whatever)--and what fun that'd be--it's time to start thinking about a little old-fashioned thievin'.

Iowa State is probably right out; they're a decent academic school, but they don't do much in terms of adding media attention. Further, their only real potential rival would be Iowa, and that gets its own special treatment already.

There's probably no way Nebraska leaves, and the two Kansas schools are likely too far away.

But what about Missouri? They've already got some bad blood with Illinois, and I kind of think the Iowa-Missouri thing could get real entertaining, real quick. Something about states that border Iowa that make them hate us. Feels fun. It brings the St. Louis media market into play, and a little less so Kansas City. St. Louis is probably more than enough. They're ranked as the #102 university in the country; not great, and it'd be the worst in the Big 10 Which Is Actually 12. But it's hardly an embarrassment, and merely aligning with the BXI could prop that ranking up to the standards of the rest of the conference.

Of course, that all depends on whether Missouri actually, y'know, wants to leave the Big XII. The Big 10 would have to make the case that it's in the school's best interest to join our conference instead and make it convincing enough that Delany doesn't have to go through the embarrassment of Missouri triumphantly announcing that they're staying in "the best conference in the land" or whatever they'd declare the Big XII to be in that scenario. Frankly, none of us have the stomach for that.

Philosophically, the case has already been made for expansion, and emphatically so. I don't think anyone's going to argue against a 12th team because 11 would be better than 12 for a conference. That's all settled. I just can't figure out who, aside from Missouri, would make any sense from a purely practical standpoint.

Or we could just say "screw it" and add Cornell.

[UPDATE: I'm fanposting it above this, but just to have it in the article: there's some good, interesting reaction from the Missouri POV over at Rock M Nation. Varied responses, as you might expect. Go check it out.--OPS]