Vengeance Is Ours: Iowa Demolishes UNI, 48-3

Share All sharing options for: Vengeance Is Ours: Iowa Demolishes UNI, 48-3 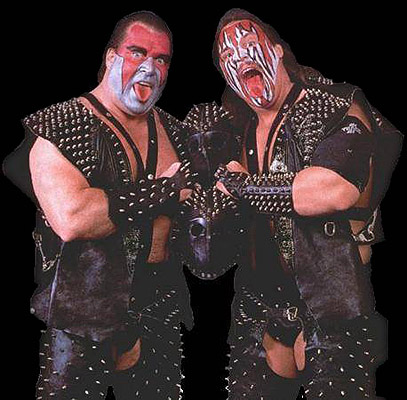 Not even having these guys could have helped UNI tonight.

Tim Brewster may like to tweet "WIN FIGHT DOMINATE," but the Iowa wrestling team lives that mantra.  Four nights after stumbling to the finish of an 18-16 win over their other major in-state rival (ISU) and two nights after the Iowa basketball team got blitzed by UNI, the Iowa wrestling team opened up a can of whupass on their UNI counterparts and left them beaten into pulp.  Granted, Iowa State is (or was) the second-ranked team in the nation, while UNI is... not ranked.  BUT STILL: we celebrate dominance in any form and over any opponent, no matter how hopelessly overmatched they are.  WOO DOMINANCE WE TOTALLY KILLED YOU DEAD.

Of course, even given the quality of the opposition, the scope of Iowa's dominance is pretty staggering.  Iowa used a handful of back-ups (Nate Moore at 133, Montell Marion at 141, Blake Rasing at Heavyweight), none of their nine wins came by less than a major decision, six of Iowa's wrestlers recorded pins, and UNI mustered a single, solitary takedown for the entire night.  Iowa had more difficulty with Coe and Cornell and UNI should have been a greater challenge.  Iowa's now off until the Midlands Championships (12/28-29), a major regional tournament that should go a long way in settling spots at 141 and 157.