Share All sharing options for: A Winner is You!  165 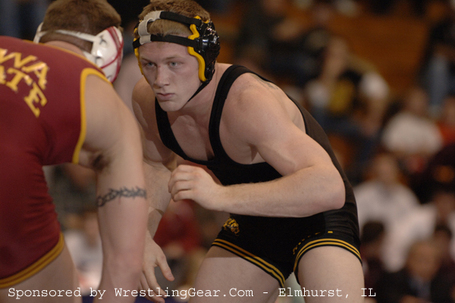 What We Already Know
Ah, Ryan Morningstar.  Someone had to pick up the mantle of "Most Frustrating Iowa Wrestler" after Mark Perry departed and Morningstar has more than capably picked up that torch.  If Brent Metcalf and Phillip Keddy represent one end of the spectrum of Iowa wrestlers -- the more traditional, action-oriented style -- then Morningstar represents the opposite end of the spectrum -- the less traditional, lay-back-and-pick-one-spot style.  It may not be as entertaining, or as aesthetically pleasing, but... all you gotta do is win, right?  Morningstar may drive fans batty with his laconic approach, but he proved last year that he can go far with it.  After moving to 165 last year (up from 157), Morningstar set career-bests in wins (32) and dual meet wins (20), and also had career-best finishes at the Big Ten Tournament (2nd) and NCAA Tournament (3rd).

Morningstar's success is predicated on his strong defensive base (which effectively negates most his opponents' offense), his impressive mental toughness (which is a must if you're going to wrestle as many close matches as he does), and his ability to maintain position and control on the ground.  He does have a solid shot when he chooses to use it; sadly, it tends to appear all too rarely in his matches.  Ryan Morningstar matches: seven minutes of staredowns, lock-ups, and riding time, briefly interrupted by a shot or two and (if you're lucky) a takedown.  It may not be thrill-a-minute, but so long as it ends with his hand being raised, it's hard to complain too much.

Who Else Is An Option
The good news is that there are guys behind Morningstar on the depth chart that have seen a reasonable amount of action in years past.  The bad news is that those guys didn't exactly enjoy a lot of success.  Jake Kerr (JR) has been a utility player for Iowa, filling in at 165 and 174 for Iowa a year ago (this year he's listed at both 157 and 165), and managing to pick up one win in dual competition (at 174).  He finished a respectable enough 15-6 against all competition a year ago, but struggled badly against most of the top wrestlers that he faced (he lost 12-1 to Iowa State's Jon Reader, 9-3 to UNI's Moza Fay, and 7-3 to Wisconsin's Andrew Howe; Fay has since departed, but Reader and Howe are currently in the preseason Top 5 at 165).  He did pick up a couple of solid wins over Missouri's Nick Marable (preseason #7 at 165) and Wyoming's Shane Onufer (preseason #19 at 174), which is something; considering he was brutal in relief of Perry in 2008 (going 6-12 overall, 0-8 in duals, and 0-5 in Big Ten duals), we'll take any progress we can get.  Aaron Janssen (JR) and Michael Fahrer (SR) are also an option at 165; Janssen went 11-6 overall last year and Fahrer went 10-6, but most of those wins came against wrestlers at other Iowa colleges (including powerhouses like Luther and Iowa Central Community College), sooo...

Who Are The Major Threats
This is where it gets interesting.  Arguably no other weight class is as loaded as 165 -- 6 of the top 7 finishers from last year's NCAA Tournament are back, including the champion (Jarrod King, Edinboro), runner-up (Andrew Howe, Wisconsin), and third (Morningstar), fourth (Jon Reader, Iowa State), and fifth-place (Andrew Rendos, Bucknell) finishers... and that was before Dustin Schlatter (Minnesota) moved up to 165 from 149.  How good is Schlatter?  He's preseason #1 despite redshirting last year and spending the bulk of his collegiate career wrestling at 149 and despite the stunning number of returning All-Americans at 165.  Morningstar went 3-0 against Reader last year (winning 2-0, 5-4, and 7-5), 1-0 against Rendos (2-1), and 0-3 against Howe (losing 4-3, 2-1, and 2-1).

What We Reasonably Expect To Happen
This is an extraordinarily difficult prediction to make for a couple of reasons.  One, as mentioned above, this weight class is absolutely stacked; when you return almost all of last year's best wrestlers at this class and then also add an elite talent like Schlatter, you're looking at a brutally difficult class.  Two, Morningstar's style (wrestling close match after close match) lends itself to chaos in the prediction game: he's talented and experienced enough to probably beat any of the top guys, but he's just as likely to lose a tight decision to them, too.  A Top 3 finish at the Big Ten Tournament seems likely, but frankly, any result at the NCAA Tournament seems plausible -- he could make a run to the championship match or he could get bounced in the early going if he runs into a bad match-up or two or if a close match goes the wrong way.

It's a barbarian on a fire-breathing leopard horse -- what more explanation do you need?