Share All sharing options for: A Winner is You!  184 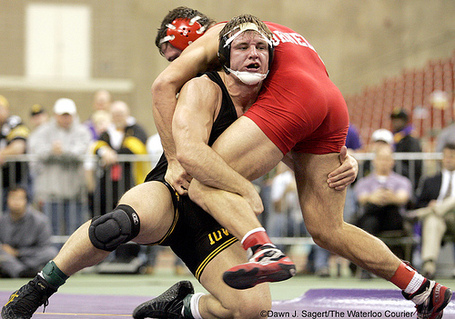 What We Already Know
Phillip Keddy might be the second-most dominant wrestler on the Iowa team behind one Brent Metcalf.  He went 34-5 last year (finishing fourth at the NCAA Tournament), with three of those five losses coming at the hands of just Northwestern's nigh-unbeatable (and outrageously dull) Jake Herbert (the other two losses were shock upsets to Rider's Doug Umbehauer in the NCAA Tournament), last year's NCAA Champion at 184.  But it's not just the record that indicates his dominance -- he also continued to hone his ability to not just win, but win in lopsided fashion.  He had eight major decisions, two technical falls, and five pins, all career-bests for him.

Stylistically, Keddy bares more than a passing resemblance to Brent Metcalf with an extra forty pounds.  Unlike Herbert or Ohio State's Mike Pucillo (another frequent nemesis of Keddy's),who often seem content to spend six minutes of a match locking up while waiting for an opening to take a shot and grind out a narrow win ,Keddy has a much more aggressive, action-oriented style that sees him frequently on the attack, moving forward, and attempting multiple shots per match.  If nothing else, it makes Keddy's matches far more entertaining to watch than Pucillo's matches -- and it's been pretty successful for him, too.  With a little luck, that style will take him to the top of the 184-pound class this year.

Who Else Is An Option
There's no one experienced behind Keddy, so as with Brent Metcalf, the drop-off goes from "national elite" to "largely untested former prep star."  Grant Gambrall (RS FR) is the likely future of this weight class; he's a local kid (from Iowa City West) and in addition to the usual prep credentials (multiple conference titles, one state title), he accumulated an 18-5 record while wrestling "unattached" (i.e., he wasn't officially affiliated with the University of Iowa at those competitions) last year.  Vinnie Wagner (SO) and Tomas Lira (FR) are other potential options at 184; Wagner didn't compete at all last year and racked up a 3-3 record wrestling unattached the year before, while Lira will almost certainly redshirt for a year and compete for the starting gig in 2010-2011.

Who Are The Major Threats
With the stall-tastic Herbert finally departed, Keddy's stiffest competition figures to come from Mike Pucillo (Ohio State), runner-up at last year's NCAA Tournament, champion of the 2008 NCAA Tournament, and a 6th place finisher at the 2007 NCAA Tournament.  Keddy defeated Pucillo in the Big Ten Tournament last year, 5-2, but Pucillo won their previous three matches: 3-2 (2007-2008), 4-3 (2007-2008), and 9-4 (2006-2007).  Keddy's other major foes could be Doug Umbehauer (Rider), who defeated Keddy twice in last year's NCAA Tournament (8-4 and 5-3) and Max Askren (Missouri), the 2nd-ranked wrestler at 184 heading into the season.  Strangely, Keddy and Aksren have never wrestled each other in college.

What We Reasonably Expect To Happen
Winning a national title is never easy, but the absence of Herbert this year should make Keddy's quest considerably easier this year.  Pucillo will be a tough obstacle in both the Big Ten and the NCAA Tournaments, but Keddy has had a modicum of success against him (one win and two narrow defeats).  Based on his ability and his track record, it's far from absurd to suggest that Keddy should be right there in the mix for Big Ten and NCAA Championships; at the very least, Iowa's quest for a third consecutive national title is almost certainly going to require him to make a deep run into the NCAA Tournament (hopefully racking up some bonus points along the way).

Keddy's from Utah, which is nothing but desert and Mormons in my mind; Mormons don't exactly get me fired up, but Kyuss was a great desert rock band.  SO THERE.