IOWA TOTALLY UPSETS TEXAS (...If Second Half Were 60 Seconds Long)

Share All sharing options for: IOWA TOTALLY UPSETS TEXAS (...If Second Half Were 60 Seconds Long)

We did, for example, foresee the fact that Texas would throttle the Hawkeyes; that 15.5 point line seemed comically low at the time, and it's only for the pervasive power of pessimism (when it comes to our own decision) that we didn't bet December's rent on the 'Horns.

And hey, for about 21 minutes, that restraint looked brilliant. After Texas jumped out to a 29-13 lead, they stopped playing defense--possibly on account of the horse tranquilizers someone slipped into their Gatorade--and Iowa fought back to within 3 points late in the half.

That would be the last we heard from the Hawkeyes.

From then on, Texas scored 17 points straight, all white absolutely erasing any Iowa attempts to score. Didn't matter if it was inside, outside, whatever; Rick Barnes' crew slapped on that trademark Longhorn defense, and Iowa was just useless, hoisted contested shots or throwing frazzled passes to nobody in particular. Essentially, Iowa had no answer for defensive aggression; they knew well enough to draw a defender with a shot fake and dribble past him, but once inside the three-point line, they seemed lost. No mid-range jumper game, and that's precisely where it's most deadly--far more than a hurried pass back out to the perimeter. At least a mid-range game slows the defender down.

The rest of the half was little better for Iowa; the Horns parlayed the 17-point spurt into a 47-16 rally before Anthony Tucker--who was just brutal tonight--added a three-pointer on the last shot of the game. So, really, it was a 47-22 half, and that was bookended by two three-pointers by Iowa. That, folks, is an utter ass-pounding. 85-60 was your final. We don't know what the record is for biggest victory in a game that was tied at the half, but tonight's game was probably within 10 points of that mark--and if it isn't, we really feel bad for whoever's on the losing end of that record.

Oh, well. Texas is the third-ranked team in the nation, and uh, Iowa isn't. So it goes. Up next are the Wichita State Shockers. WSU cheerleaders, anything to say about that? 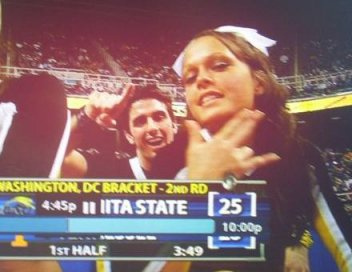 Hmm. Okay, then. See you tomorrow, cheerleader lady--and we'll bring the pinky condom just in case. No sense in getting pink eye.