Share All sharing options for: A Winner Is You! 157

Come January, when the Iowa football team again goes into hibernation for another nine months, what's a Hawkeye fan to do?  You could pay attention to our historically awful basketball team... or you could give a little time to the two-time defending national champion, #1 ranked wrestling team.  It is the one winter sport we're really, really good at, after all.  In the spirit of our Assume the Position series for football, we bring you A Winner Is You!, a weight class-by-weight class breakdown of the Iowa wrestling team, counting down from the weight class we have the most confidence in to the weight class we have absolutely no clue about. 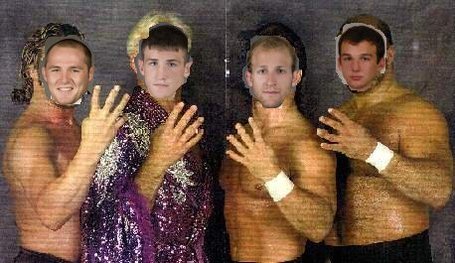 Editor's note: This preview was written prior to the Iowa City Duals on Friday, Nov. 20.

What We Already Know
Um... yeah, about that... "What we already know" is -- well, precious fucking little, to be honest.  We know that last year's starter, Matt Ballweg (JR) is back this year.  We know that, normally, the return of the previous year's starter would settle any confusion about the current year's starter  But we also know that Ballweg struggled mightily last year.  He went 13-19 overall, 9-15 in duals (1-7 in Big Ten duals), and 0-2 at the Big Ten Tournament, and failed to qualify for the NCAA Tournament.  So, yeah, 157 was a bit of a black hole rough spot for the team last year.  One hopes that a year's experience in competition and the countless hours of practice he's had since the end last season has enabled Ballweg to improve and become a more legitimate threat.  Of course, Ballweg didn't exactly use the wrestle-offs to stake a decisive claim to the position -- he got bounced in his first match by a much-hyped freshman phenom, Derek St. John, 7-4.  It's safe to say that things are wiiiiide open at this weight.

Who Else Is An Option
In terms of pure talent, the best option is most likely the aforementioned St. John, a true freshman from Iowa City West who tore it up on the prep circuit.  He was solid at the wrestle-offs, beating Ballweg, 7-4, and Aaron Janssen (JR), injury forfeit.  St. John is an exceptional talent and a virtual lock to be a top contender for a spot on the team in a year.  In fact, he'd obviously be a top contender for this spot now, but Brands tends to believe very strongly in the benefit of freshmen taking redshirt years.  Having said that, Brands also obviously cares very much about winning another national title and if he thanks that St. John's presence is necessary to make that happen, he won't hesitate to pull that redshirt.  The other two main options at 157 are Jake Kerr (JR) and Aaron Janssen (SO).  Kerr has spent much of the past few years wrestling at 165, although he also filled in for Borschel at 174 last year.  After going 6-12 (0-5 in Big Ten dual meets) two years ago, Kerr improved to 15-6 overall a year ago, which was nice to see.  Janssen has also spent most of his career 165 lbs., going 11-5 overall a year ago, after going 6-5 the year before that.  At the wrestle-offs, Janssen defeated Kerr, 6-2, before injury defaulting in his match against Derek St. John.  Janssen appears to be the slight favorite to emerge as the top guy at 157 (assuming St. John redshirts), but odds are there will be plenty of competition between the challengers for this spot.

Who Are The Major Threats
The main challenger here is Nebraska's Jordan Burroughs (SR), the two-time defending NCAA Champion at 157.  He destroyed Ballweg last year, 22-7.  On the other hand, only two of last year's other All-Americans are back this year, Cal Poly's Chase Pami (SR) and Bloomsburg's Matt Moley (SR).  The other main threats could be Cyler Sanderson (SR), who followed his brother from Iowa State to Penn State, and Harvard's J.P. O'Connor (SR).  Needless to say, this isn't the deepest weight class around, although the talent at the top is undeniable.  Like Burroughs, Sanderson also mauled Ballweg a year ago, 22-9.

What We Reasonably Expect To Happen
There was no denying Ballweg's effort last year, but the results left a lot to be desired.  If he's again the man here and he hasn't improved considerably, it's going to be another long year and one that ends without much success in the Big Ten or NCAA Tournaments.  Granted, at this point it's also wholly unclear how much of an upgrade either Janssen or Kerr would be or whether St. John could hold up over the course of an entire season.  So, realistically, we have no real idea what to expect from this weight class.  Still, it's difficult to imagine results much worse than what we saw last year, so let's pencil in whoever gets the nod for a top six finish at the Big Ten Tournament and a low spot in the NCAA Tournament.  Hey, we're not expecting miracles here or anything -- Iowa has won back-to-back national titles without getting too much out of this weight class and, on paper, the rest of the team looks more than strong enough to pull the weight of this class once again.  Getting points out of this class would be nice, but it doesn't seem essential.