Share All sharing options for: Brewster Takes the Stand

CLERK: Sir, do you solemnly swear that the testimony you will give in this hearing will be the truth, the whole truth, and nothing but the truth so help you God?

DEFENDANT: Yes I do.

CLERK: Would you state your name, age, and occupation for the record please?

JUDGE: There is no shrieking or crying permitted in this courtroom, sir. Do you understand that?

JUDGE: Very well. Would you have a seat please sir?

TIM BREWSTER: Can I get a Gatorade or a Red Bull or something here?

JUDGE: Clerk? Can you get Mr. Brewster some water please?

JUDGE: No. This is courtroom sir, not Kwik-E-Mart.

TIM BREWSTER: I love that place. Coffee and Slim Jims, can't beat it.

JUDGE: [looks at Prosecutor] You can begin your questioning.

PROSECUTOR: You find it particularly hard to get coffee and Slim Jims these days, do you?

PROSECUTOR: Nevermind. Sir, you played tight end for the University of Illinois Whine-I in 1982 and 1983? Is that correct, sir?

PANTHERHAWK: Right. We're going to get to him in a minute. Now, during that time did you play the Iowa Hawkeyes?

PANTHERHAWK: Do you remember the games?

TIM BREWSTER: Yep. Sure do!

PROSECUTOR: Your Honor, I want to introduce into evidence this article from the Minneapolis StarTribune from November 19, 2009.

PROSECUTOR: [Hands docment to Tim Brewster] Can you read from "Asked about the visitors' locker room" please sir?

Asked about the visitors' locker room in Kinnick Stadium that is famously adorned in pink, Brewster offered an anecdote: "[Coach] Mike White, when we went in there the first time, he put meat locker paper all over it. Covered the whole locker room. You didn't see an ounce of pink anywhere.''

Did you win the game?

PROSECUTOR: That, sir, is a story quoting your words from a press conference you held on November 18, 2009. Do you dispute that?

PROSECUTOR: Your honor, I want to introduce into evidence this article from the Daily Whine-I student newspaper. [Hands document to Tim Brewster] Sir, can you read the date at the top of the paper?

PROSECUTOR: Very good. Can you turn that over and read the headline on the back page, which, if it pleases the court, is the Sports Page?

PROSECUTOR: I believe you just said lose? Your Whine-I team played in Iowa City in 1982 and they lost 14-13. The following year you played Iowa at home, in Champagne at Memorial Stadium. Now, can you explain this discrepancy?

PROSECUTOR: Okay. Let's move on then. Sir, please explain to the court what the Brew Crew Report is?

TIM BREWSTER: It's our official blog.

TIM BREWSTER: Well, okay, it's my blog. What's your point here? Every coach these days has a blog.

PROSECUTOR: Every coach? Kirk Ferentz? No blog. Pat Fitzgerald? No blog. No one cares either, but the point being, no blog. Joe Paterno? Joe Paterno has no computer, no cell phone, no beeper, and no touch tone sir. Joe Paterno uses a rotary dial telephone, rides a Schwinn Continental 10-speed to work, and...hmmm...oh, yeah. I almost forgot, NO BLOG! In fact, the only other coach I could find in all of college football who has his own blog, is June Jones---and I think it's fair to say sir that you couldn't hold June Jones's clip board!

TIM BREWSTER: Well, they're making a huge mistake. All the kids today are on the internet. If you want to be a first rate recruiter you...

PROSECUTOR: Kids? They're kids alright. You disgust me. Your honor I want to introduce into evidence this page from the Brew Crew Report, Mr. Brewster's aforementioned blog.

PROSECUTOR: [hand Tim Brewster a document] I copied this from your blog. Will you read this aloud for the courtroom, sir? 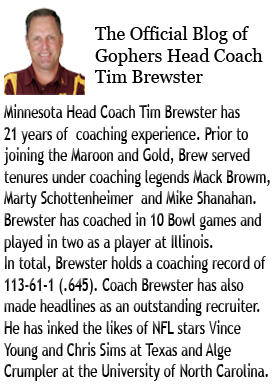 PROSECUTOR: Your teamssss? You mean your TEAM...as in singular, as in the only team you have coached in the history of EVER. And your singular team is all of....listen closely sir, 13 -21. Yeah, 13 wins. You, sir, have purposely inflated your win total by 100. Not two or three, but a C-note! Have you not?!

TIM BREWSTER: No, not at all. I was coaching during all those wins. Those are wins for which I deserve credit. Without me coaching I am not sure those are wins there.

PROSECUTOR: Sir, without you coaching, this game is a BETTER fucking place! You scumbag, mother...

DEFENSE LAWYER: Your honor! Mr. Pantherhawk is badgering the witness! I object!

JUDGE: Hold one here Mr. Whitespeedreceiver...Mr. Pantherhawk, we do not need to raise our voices.

PANTHERHAWK: Your honor I want to introduce into evidence the 2009 Minnesota Gold Goopher Media Guide.

PANTHERHAWK: Can you read from the top there, aloud for the courtroom sir? 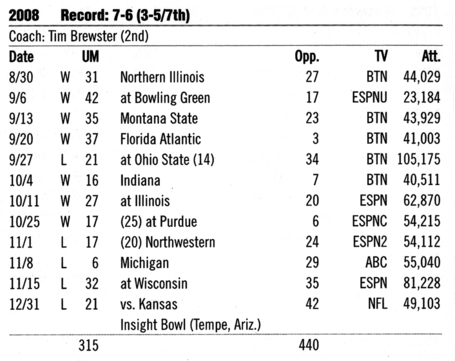 PANTHERHAWK: Can you count up the losses listed below that and tell the courtroom that number?

PANTHERHAWK: Five? Not six as is stated at the top? Which is accurate. Your pathetic Goophers went 7-6 last year. Yet, you chose to only list five losses. Interesting.

PANTHERHAWK: I didn't aks a question yet, sir. Now, do you want to hazard a guess as to which loss is magically missing that would have accounted for that sixth loss?

PANTHERHAWK: It's the Iowa game sir. The game you lost 55-0. The game that stands as the second most lopsided loss in Minnesota Goopher history. The game in which your ass was handed to you on a silver platter with a beautiful lace doily, at home, on television, with a crowd that was so riveted to the scintillating drama on field that at least one urinal, that we know of, turned into a hot house. Everyone saw it. It was reported on every major sports website and in every major sports section of every major newspaper in this great land of ours. That game sir was a LOSS! And it is was purposely censored from your Media Guide.

WHITESPEEDRECEIVER: Your honor, are we going someplace here? What is counsel's point?

JUDGE: Mr. Pantherhawk, I think we need to wrap up. You have two minutes for your closing arguments now.

PANTHERHAWK: Yes, your honor. Ladies and gentlemen of the jury, Brewbag the Douchebag, as I like to call him, is a liar. I know it. He knows it. And now you know it. He pads his record on his official blog. He leaves out losses in his team's media guide. He lies about winning games he's actually lost as a player. All while in charge of young, impressionable young minds, mind you.

TIM BREWSTER: [under his breath] Minds, mind you?

PANTHERHAWK: Admittedly, the University of Minnesota is filled with losers and hypocrites, and douchbags---like Mr. Brewster---and God knows what else. But, the charge is no longer a charge. It is irrefutable truth. Brewbag the Douchebag is a liar.

TIM BREWSTER: Your honor may I respond?

JUDGE: No. I think I have heard enough. We will recess and leave this in the hands of the jury. This court is now adjourned. [slams gavel]

WHITESPEEDRECEIVER: That guy Pantherhawk is a Grade A dickhead. He's a troll and freak show and everyone knows it. The jury will never believe him.

TIM BREWSTER: But I'm a truthful guy! You believe me. Right?

WHITESPEEDRECEIVER: Well, let me explain something. My obligation is not finding, revealing or even knowing the truth; my obligation is to the law. You understand.

WHITESPEEDRECEIVER: Save it for the recruits. It's in the hands of the jury. Now, let's go get some coffee while they deliberate.

WHITESPEEDRECEIVER: Sure, and Slim Jims.