Share All sharing options for: A Winner is You!  149 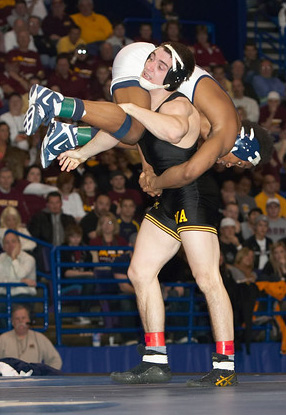 What We Already Know

Brent Metcalf (SR) is a fucking stud.  That's the sort of keen insight you come to BHGP for, right?  No, seriously, Metcalf is really, really, really good.  His relentless, all-action style is the almost perfect embodiment of the "Iowa style" of collegiate wrestling in human form.  In his two years as a starter at Iowa, he's gone 72-2, with one national championship (2008) and one runner-up finish (2009).  Last year, he steamrolled virtually everyone in his path... until the finals, when this happened.  Sigh.  There are many theories about what happened in that match -- Metcalf was too hyped up, Caldwell had the perfect gameplan, Caldwell just has Metcalf's number, stylistically, Metcalf just had a bad day -- but it doesn't really matter which (if any) is true; the end result is still the same -- the seemingly unstoppable, unbeatable Brent Metcalf was... beaten.  Solidly.  Convincingly.

Still, one result doesn't ultimately change the fact that Metcalf has been a virtual force of nature at 149 since he's been at Iowa -- one need only look at the gruesome statistics to get an idea of the trail of destruction he's blazed over the last few years (last year alone he had 20 pins, the fourth-best total in school history, and only two of his victories were regular decisions -- the rest were pins, technical falls, or major decisions... in other words, thoroughly lopsided victories).  Frankly, given the frightening level of determination and focus he brings to the mat, there's a pretty good chance that his defeat last March has only left him even more driven to dominate this winter.  Which is disturbing news for anyone else at 149, but great news for Iowa.

Who Else is an Option

Let's be frank -- the gulf in talent and experience between Metcalf and the next man in at 149 is as wide as the Pacific Ocean and as deep as the Mariana Trench; in football terms, it's akin to going from Drew Tate to Cy Phillips.  You just don't want to see it happen.  Still, per the roster, the other faces at 149 are Dylan Carew (FR), Jeret Chiri (RS FR), Stew Gillmor (SO), and Ethan Sebert (SO).  It's probably anyone's guess as to who would come in if something happened to Metcalf.  Carew may wind up being the future at 149, but it's exceedingly likely that he'll be redshirting this year; between the other three options -- who knows.  Let's hope we don't have to find out this season.

Who Are the Major Threats

And here is where things get interesting.  There's been a bit of an exodus away from this weight class in the off-season.  Defending national champion (and Metcalf nemesis) Darrion Caldwell (North Carolina State) is going to redshirt and miss the entire season, thanks to an injury sustained while roller blading.  Interestingly enough, though, there was talk of him redshirting this season as far back as March, just a week after winning the national championship; back then the reason was ostensibly to help him better prepare for a run at making the U.S. Olympic team in 2012... any suggestion that he was redshirting to dodge Metcalf would be spurious and totally unfounded.  So we're not saying that.  Nope.  Meanwhile, frequent Metcalf practice dummy "rival" Bubba Jenkins (Penn State) is also likely to redshirt and we would never suggest that a desire to avoid another year of getting bitchmade by Metcalf was his true motivation.  Perish the thought.  (Although the fact that he's academically ineligible for the first semester anyway will probably make the decision to redshirt easier.)  And, finally, one of Metcalf's stiffest challengers, Dustin Schlatter (Minnesota) is jumping up not one but two weight classes (to 165) to get out of 149.  He lost a narrow decision to Metcalf at the 2008 Big Ten Championships, but does own a win over him from their high school days.

So who does that leave?  Well, in fairness, it does still leave last year's third and fourth place finishers at the NCAA tournament, Kyle Ruschell (Wisconsin) and Lance Palmer (Ohio State), respectively.  On one hand, Metcalf has never lost to either guy (he's defeated Ruschell 14-5, by fall in 2:12, and 16-4 and he's defeated Palmer 6-2, 5-3, and 3-2); on the other hand, they're still good wrestlers (Palmer went 31-5 last year, while Ruschell went 32-8 last year) and the road to a third-straight Big Ten championship and a second national championship will likely go through them.

What We Reasonably Expect to Happen

149 is the one weight class where anything less than a Big Ten Championship and a National Championship will be a disappointment, particularly with Caldwell and Schlatter out of the picture.  That's an absurdly high standard to try and live up to, but after two years of almost complete dominance, it's simply what we've come to expect out of Metcalf -- and it's probably less than he expects of himself.  We'd be satisfied with wins of any stripe; he almost certainly wants to pin his way to another championship.

Like Metcalf, Mastodon isn't really satisfied unless you wind up sore, battered, and with blood coming out your ears.