Share All sharing options for: A Winner Is You!  141

Come January, when the Iowa football team again goes into hibernation for another nine months, what's a Hawkeye fan to do?  You could pay attention to our historically awful basketball team... or you could give a little time to the two-time defending national champion, #1 ranked wrestling team.  It is the one winter sport we're really, really good at, after all.  In the spirit of our Assume the Position series for football, we bring you A Winner Is You!, a weight class-by-weight class breakdown of the Iowa wrestling team, counting down from the weight class we have the most confidence in to the weight class we have absolutely no clue about. 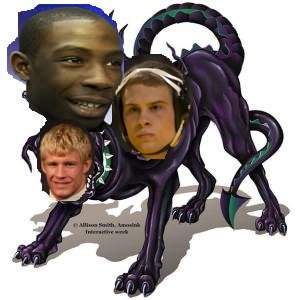 As soon as the paperwork gets filed, we're totally going to unleash this hellbeast on the rest of the country.
What We Already Know
Options, oh, we have options.  Or we should have options, anyway.  The primary option at this point is Dan LeClere (SR), who manned this spot two years ago, going 22-11, finishing 5th at the Big Ten Tournament, and making an abrupt exit from the NCAA Tournament.  LeClere sat out most of last year while dealing with nagging injuries and the re-emergence of Alex Tsirtsis.  But Tsirtsis is gone now and LeClere should get the first crack at replacing him.  At times, LeClere can be almost as maddening to watch as Ryan Morningstar, but he has the talent to do more than that... it's just a matter of putting it all together at the right time.  But what if he's not the answer?  Well...

Who Else Is An Option
If LeClere isn't the man to beat, then there are a couple of other very good options in Joe Slaton (SR) and Montell Marion (SO).  Slaton was a force at 133 lbs., picking up a runner-up finish in the NCAA Tournament two years ago, before injuries and weight-cutting issues kept him largely out of action.  Unfortunately, while his injuries have healed and the move up to 141 lbs. has alleviated his weight-cutting problems, he has new issues to deal with that will prevent him from competing until second semester.  In addition to his legal woes, Slaton is also academically ineligible this semester.  Slaton's either going to wind up being a testament to perseverance and overcoming life's challenges or a case study in wasted potential.  Marion went 10-3 last year and has plenty of talent; in fact, he beat LeClere in the recent wrestle-offs, 11-7.  He may have the greatest upside of any of the options at this class; like Slaton, though, he's burdened by some off-the-mat issues.  Like Slaton, he's reportedly out until second semester.  So LeClere has the position to himself for the first six weeks or so and he has a chance to cement his spot with a series of strong performances.  Regardless, there should be some pretty heated battles in the practice room among these guys; may the best man win.

Who Are The Major Threats
The biggest threat at this class, both within the Big Ten and nationally, is probably Ohio State's Reece Humphrey (SR), who was a runner-up at both the the Big Ten Tournament and the NCAA Tournament last year at 133 lbs.  He's moved up a class to replace fellow Buckeye J Jaggers, a two-time NCAA Champion at 141 lbs.  He's got the talent and the experience to be a major obstacle here.  Aside from Humphrey, the main threats may be Iowa State's Nick Gallick (SR), West Virginia's Brandon Rader (SR), Maryland's Alex Krom (SR), and Arizona State's Chris Drouin (JR).  LeClere went 2-0 against Gallick two years ago; Slaton beat Gallick the year before that.  Slaton also beat Humphrey two years ago (when both were at 133 lbs.).  LeClere went 1-1 against Drouin two years ago.

What We Reasonably Expect To Happen
Well, it's not like LeClere and Tsirtsis set the bar too high with their performances in the last two NCAA Tournaments -- a pair of early exits and very few team points.  Just managing to get any team points would be a nice boost to the three-peat quest this year.  Whoever winds up landing the spot here should stand a good chance of picking up points, though.  Slaton is inexperienced at 141 lbs., but it's a more natural weight for him and he's proven to be an elite wrestler in the past (see: his NCAA runner-up finish at 133 lbs. two years ago); if he can move past his various issues and get focused, he could be a serious threat at 141 lbs.  LeClere was inconsistent as the main man at 141 lbs. two years ago, but he has the talent to make a run -- perhaps a year on the sidelines has improved his focus.  Marion is even less experienced than either Slaton or LeClere, but he is prodigiously talented and may be the safest bet here, given LeClere's past struggles and Slaton's many issues.  Like we said earlier, though, no matter who winds up being the man here, if they can get any points at the NCAA Tournament they'll represent an improvement on what we've gotten out of this weight class the last two years.