Share All sharing options for: Ivan Maisel Is An Ungrateful Little Twit 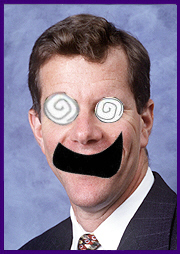 Ivan Maisel is one of the most accomplished college football writers out there, and is generally thoughtful enough not to engage in the prickish nonsense that usually afflicts ESPN "personalities"*. Today, then, is a dark day in his journalistic history.

It's been a while since we engaged in a good, old-fashioned fisking; this seems to be one of the instances in which it's, in our eyes, warranted. Those of you who were unlucky enough to visit ESPN.com today would have seen a heavily hyped story by Mr. Maisel in which he--in no uncertain terms--calls the 2009 season a "fraud." Not a "disappointment," not "not as good as 2008," a fraud. It's the type of column that can only come from the bubble of career sports journalists, ones who feel their sport "owes" something to them; in Maisel's case, the sport seems to owe him a predictable path to the finish. No, really, that's the crux of his argument.

I thought about fisking the entire thing, until RossWB reminded me that I'd just be repeating myself over and over. Then I thought about posting the image at the above right (the eyes and mouth of which, by the way, I stole from @oatmeal; his cartoons are amazing and you've probably already seen one without knowing) every time Maisel wrote a paragraph that was just a restatement of "this is not what I expected in the preseason," but we figured you didn't want to look at that thing 25 times in one column.

So here are the highlights, dutifully fisked; rest assured that we took every effort not to misrepresent the tone of his column. As if that were possible. We'll just say this; we found the whole thing completely objectionable, and he didn't even mention Iowa. Yeah. Read on.

I want my money back.

What money? And from whom?

It is the third week in November -- the traditional beginning of rivalry season -- and the best game is No. 11 Oregon at unranked Arizona.

Ohio State versus Michigan? Three years ago, the so-called best rivalry in college football gave us No. 1 vs. No. 2, the last such regular-season game. This year, the Wolverines have lost six consecutive Big Ten games and hope that an upset of the No. 10 Buckeyes will get them into the Little Caesars Pizza Bowl.

It is the third week in November. No. 1 Florida is playing Florida International, No. 2 Alabama is playing Chattanooga, an FCS school, and what was the Southeastern Conference thinking when it cooked this up?

Also a decent point, but where was this complaint in August? Or, for that matter, the prior four years once the season went to 12 games? Here's a list of UF's opponents in the third weekend of November in that same timespan: South Carolina, Florida Atlantic, Western Carolina, nobody at all. They moved FSU to the 4th Saturday in November once the 12-game season became set in stone. Quelle horreur.

Similarly, Alabama's Iron Bowl with Alabama is next week, not this week; like with Florida-FSU, this is a function of the season being one week longer, but teams still finishing the season with their big rivalry game. Maisel really ought to know this.

If Maisel's contention is that the SEC ought to be scheduling tougher opponents to fill the non-conference slate, hey, no arguments here. Ever. But he's complaining about a quirk that came about because the scheduling rules were changed once lots of deals for those seasons were already in place. It's not really a big deal at all.

I want my money back.

Yeah, we got that. The above questions remain.

I'm having this dream in which the new BCS executive director is not Bill Hancock but Bernie Madoff. The college football season is four weeks from concluding, and I'm still waiting to see the returns it promised me in August.

This is childlike petulance sandwiched by two admissions of outright hallucination. Bernie Madoff stole billions of dollars. That has nothing to do with the BCS in any way, shape, or form. Further, in case Maisel forgot, this is college football, a sport played by 18- to 23-year-olds. Thus, in college football, shit goes crazy all the time.

The preseason rankings? No. 3 Oklahoma is 6-4 and looks good only in comparison to No. 4 USC.

Penn State, the preseason No. 9, lost to the only two good teams it played. And lost both at home. By more than 10 points.

Par for the course. Hell, just last year, Clemson, Auburn, and LSU were preseason top 10 picks and finished outside the polls. Where was the "fuck college football for wronging me" narrative then?

Maisel then lists the ills that have befallen the seemingly-prohibitive preseason candidates for Heisman--Colt McCoy, Sam Bradford, Tim Tebow--before this strange sentiment:

None of this is to say that the Heisman candidates who have risen in their stead are not good players. Most of them play this position referred to as "running back." Kids, ask your fathers. They remember when "running backs" won the Heisman every year. It was back when there were such things as '75 Corollas. And clutches.

Again, ten seconds on Google should tell Maisel that the Oughts are only the second decade in college football history in which quarterbacks have won more Heismans than running backs. The first isn't the '90s; it's the '60s, which should seem even more repulsive to Maisel.

So I want my money back.

WE GET IT. YOU'RE SPOILED.

The hottest team in college football this decade [he means USC] has lost two out of its past three games by a combined score of 102-41.

If Maisel truly expects his readers to believe that Stanford breaking USC's stranglehold on the Pac-10 is bad for college football, then he's spent a little too much time in Bristol. USC's more popular than Stanford, yes, and there are probably a lot more people who would wait in line for tickets to watch Matt Barkley than Toby Gerhardt, but that's a short-term symptom of USC dominance, not proof that such dominance must exist in perpetuity or must only be broken by an undefeated team. Yes, Stanford lost to Wake Forest. This is college football. It happens all the time.

Notre Dame is in the throes of yet another coaching drama. It used to be that the Fighting Irish could be good for a national championship or a Heisman Trophy every few years. Since Lou Holtz retired in 1996, Notre Dame hasn't strayed too far from 7-5.

So, let's get this straight. Running backs winning the Heisman a lot during that time span is an ugly relic of "your dad's football" (Note to Mr. Maisel: you're about as old as my dad). Notre Dame's prominence during the same time frame? GLORY DAYS! Seriously, here's an exhaustive list of who cares about Notre Dame:

And that's it. The Irish aren't just yesterday's news, they're yesterdecade's news. Stop slobbering all over them. They're only "the team you either love or hate" because nobody in the sportswriter bubble will let us just ignore that middling old dinosaur of a program. Notre Dame makes Michigan look like Boise State.

There are four weeks remaining in the regular season -- don't forget, Army-Navy moved to Dec. 12 -- and 34 bowl games. A voice inside counsels, "Patience."

It will be great to see Texas say goodbye to McCoy in his last home game on Saturday, and see the denizens of the Swamp do the same to Tebow the following Saturday.

Makes you wish there were more white Christian quarterbacks these days, dunnit? These guys play football the right way! They use prayer! HOW DARE YOU NOT LIKE THEM.

There's nothing that a classic game between No. 1 Florida and No. 2 Alabama couldn't cure. The two of them are a Crimson Tide victory in the Iron Bowl away from the first meeting of 8-0 division champions in the 18 seasons since the Southeastern Conference expanded.

There's nothing that a BCS Championship Game featuring either Florida-Texas or Alabama-Texas could not cure. And if one of those three takes to bed with a bad case of upset, seeing TCU, Cincinnati, Boise State or Georgia Tech in the title game would go a long way toward salvaging the season.

Oh, so the overwhelmingly likely scenario for the SEC, then every plausible national title scenario would save the season?

Then what the hell is the point of this entire article? Seriously, if nothing short of a nuclear blast in either Austin, Gainesville, or Boise is going to ruin the season in the end, then what is Maisel feeling so bilked over? That the secondary conferences aren't interesting enough? Because when we checked a couple weeks ago, everyone at ESPN was crapping snarled rebar over the notion that Iowa might run the table in the BXI and get a TOTALLY UNDESERVED BCS bid on account of the pesky objective data that the computers were noticing.

Really, there's no central theme to Maisel's argument; it's a mishmash of "this change is bad" or "this detail's bad out of context so here we go" or whatever. It really takes an insulated, incompetent reporter to look at the totality of this season, see the six(!) undefeated teams left this late, and conclude that the season was a sham or a ripoff or whatever. Moreover, it's unbecoming of the college football beat writer at the nation's most dominant college football source to take such an unfocused potshot at that very sport without making a cohesive (or, hell, coherent) argument at the same time; here we are, though, and I can't figure out just what Maisel was trying to communicate with his column. Wait, there was one theme:

All of those games together may be enough to make me feel as though I have gotten my money's worth. As of now, I feel like a coach who has been outschemed.

By a coach named Ponzi.

That theme, of course, is that Maisel was swindled--but by whom**? His own untethered expectations? Being that we can't fathom another answer, we'll just suggest that if he really doesn't like how this season has played out thus far (even in full acknowledgment that the postseason will be a chaotic clusterfudge of deserving, undefeated teams), then that's a problem with himself, and not one that ought to be foisted upon the hundreds of thousands of unwitting daily readers of ESPN.

*It's worth noting, of course, that even restricted to the MSM, the worst offenders are not on ESPN. We would read 10 Pat Forde columns before one Gregg Doyel wordvomit, and fuck Pat Forde.
**No, not him.