A Winner Is You! Heavyweight

Share All sharing options for: A Winner Is You!  Heavyweight

Come January, when the Iowa football team again goes into hibernation for another nine months, what's a Hawkeye fan to do?  You could pay attention to our preseason consensus cellar dweller frankly terrible basketball team... or you could give a little time to the two-time defending national champion, #1 ranked wrestling team.  It is the one winter sport we're really, really good at, after all.  In the spirit of our Assume the Position series for football, we bring you A Winner Is You!, a weight class-by-weight class breakdown of the Iowa wrestling team, counting down from the weight class we have the most confidence in to the weight class we have absolutely no clue about. 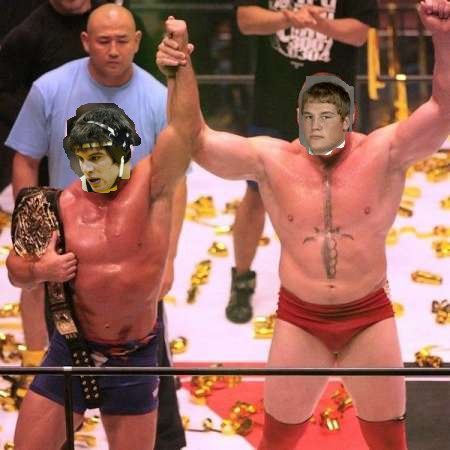 DANIMAL AND THE BABY-FACED ASSASSIN: CHAMPIONS OF ALL THEY SURVEY.

What We Already Know
Until a few months ago, this weight class was as much (or more) of a known quantity as any of the previous weight classes that we've looked at in this series -- Dan Erekson (SR) was just going to pick up where he left off last March.  He had already started three years (though not consecutively and not all at heavyweight; he wound up redshirting two years ago), had steadily improved over the course of his career, and developed into a legit contender by the end of the previous season (going 27-8, winning the Big Ten Tournament, and finishing fourth at the NCAA Tournament).  Then he got injured (torn pectoral muscle) and found himself sidelined for the first few months of the season.  Which is a damn shame, because Erekson had developed into one of the most dominant and most consistent performers on the team by the end of last season; his dramatic pin of Iowa State's David Zabriskie in the NCAA Tournament last year was arguably the biggest reason why Iowa was able to repeat as national champions.  Now he's unlikely to be back in action until around January and he'll need to spend the Big Ten season shaking off the rust in hopes of getting into peak form in time for the Big Ten and NCAA Tournaments.  But while we wait for that to happen, someone else will have to be manning the Heavyweight spot in the roster.  So who's that gonna be?

Who Else Is An Option
The "next man in" with Erekson laid up is likely to be Blake Rasing (SO), a shaved bear of a man who uses every ounce of the 285-lb. weight limit for heavyweights.  He missed most of last season for personal reasons and wrestled very little the year before that, so "battle-tested" is not one adjective that we'll be using to describe Rasing.  The other option at heavyweight is Jordan Johnson (SO), who's also pretty damn inexperienced (he went 9-5 last year) and whose most notable characteristic may be hailing from the same dirty river town that gave us Pat Angerer.  We can only hope some of Angerer's badassery has rubbed off on Johnson.  In the recent wrestle-offs, Johnson actually defeated Rasing, 3-2, but the word is that Rasing will still be the guy to get the call while Erekson is out.

Who Are The Major Threats
This is yet another weight class that isn't particularly strong in the Big Ten (Minnesota's Ben Berhow (JR) is the only B10 challenger in the preseason top ten), but does boast seem pretty solid options nationally.  The preseason number one is Duke's Konrad Dudziak (SR), and the Big 12 boasts a number of top challengers, including Iowa State's Dave Zabriskie (SR), Oklahoma State's Jared Rosholt (SR), Missouri's Dom Bradley (SO), and Nebraska's Tucker Lane (SO).  Erekson went 1-1 against Zabriskie (losing an early season dual meet and winning that crucial match in the NCAA Tournament), 0-2 against Rosholt, 1-0 against Lane, and 1-0 against Bradley.  So if Erekson can get his mojo back in time, he actually stacks up favorably to the other top contenders.

What We Reasonably Expect To Happen
This is entirely dependent on Erekson's rehab.  If he's able to come back healthy and regain his form relatively quickly, the ceiling for this weight class is extremely high -- it's not unreasonable for him to contend for a national title.  But that's a big if, sadly.  We don't know how healthy he'll be upon his return, or how much his conditioning has suffered, or how long it will take to shake off the rust.  He should have a good chance to repeat as Big Ten champion, given the relative weakness of the rest of Big Ten field, and repeat as an All-American at the NCAA Tournament, but a deep run in the NCAAs is tough to forecast until we see Erekson in action.