Share All sharing options for: Two Years Ago Today... 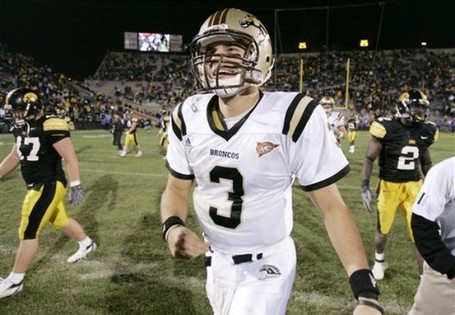 Funny how much can change in just two years.  Two years ago today the Iowa football team suffered arguably its worst -- or most humiliating, at least -- defeat of the last decade.  Oh, there have been more lopsided defeats and there have probably even been defeats to teams worse than the 2007 Western Michigan Broncos (who were a pretty middling outfit).  Many of those defeats happened during the formative years of Kirk Ferentz's tenure, when his Iowa teams played hard but frequently lacked talent and/or experience.  Or they happened against bitter in-state rivals or hyper-motivated conference rivals, so it was easy to rationalize the loss by saying "they wanted it more."
But the November 17, 2007 loss to Western Michigan didn't fit any of those easy categories.  It was far from the most talented or most experienced squads of the Ferentz Era, but it wasn't completely lacking in those departments, either.  It featured Albert Young and Damian Sims, who had been a dynamite combination in years past.  The defensive front seven was pretty well-stocked with talent and experience, too, between Kenny Iwebema, Mitch King, Matt Kroul, Bryan Mattison, Mike Klinkenborg, and Mike Humpal.  It wasn't as if the team had nothing to play for, either -- beyond the standard pride of Senior Day, they needed one more win to ensure themselves a trip to a bowl game (Western Michigan didn't even have that to play for; they were just acting as spoilers).
Defeat and misery that week wasn't exclusive to the action on the field, either.  The week of November 17, 2007 also saw the first news reports of a sexual assault involving Cedric Everson and Abe Satterfield.  Eight months later those reports would explode into a nightmarish scandal that threatened to paint Kirk Ferentz, the athletic department, and the University of Iowa administration as badly negligent and aloof at best and guilty of conspiracy and obstruction of justice at worst; it made Iowa football the leading example of "Programs Gone Wild."  That was two years ago.
Today, it seems like a lifetime ago.  On the field, Iowa went from a team that was pushed around by Western Michigan to a team that was a play or two away from beating Ohio State in Columbus, winning the Big Ten title, and going to the Rose Bowl for the first time in nearly two decades.  That's a pretty remarkable transformation.  (The fact that they did it with a team that was ravaged by injuries and missing most of its offensive leaders is even more astounding.)  Could you have ever envisioned such a quick turnaround?  Many of the guys who have emerged as leaders and key performers on this team were blooded in the painful slog of 2007, like Adrian Clayborn, Christian Ballard, A.J. Edds, and Derrell Johnson-Koulianos.  The transformation of DJK is a great example of Iowa's turnaround in general.  My enduring memory of him from the Western Michigan game is of him seemingly quitting on a play and talking to some fans in the end zone while a Bronco defensive back was running back an interception.  My enduring memories of him from the Ohio State game will be of multiple clutch catches and, of course, of the rally-igniting 99-yard kickoff return in the fourth quarter when hope was slipping away.  He's gone from a talented but raw and sometimes immature talent to an extremely reliable target in the passing game and an explosive playmaker in general. 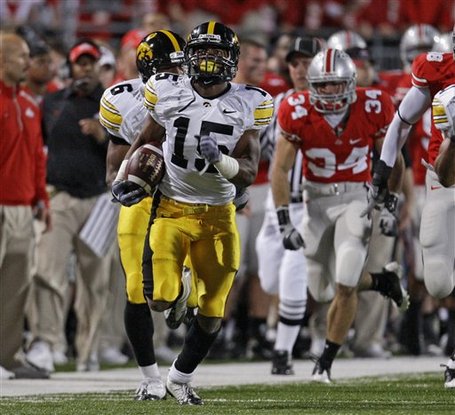 Yes, he's totally checking out his runback on the Jumbotron.

But many of the top performers in 2009 would have never been predicted back in 2007.  Pat Angerer, arguably the heart and soul of the 2009 defense, nearly quit football in 2007 after dealing with a serious of injuries and illnesses.  Amari Spievey, one of the best cornerbacks in the conference in 2009, had washed out of Iowa in 2007 thanks to an inability to go to class.  Brett Greenwood was, well, EPIC GREENWOOD back then; now he's a guy everyone was relieved to see take the field against the Buckeyes.  The other defensive secondary spots were manned by the much-maligned Harold Dalton and the combination of Adam Shada (victim of the third indignity suffered by the Iowa football team that day/week, which was the betrayal of the Iowa fanbase as expressed through the boos directed at him) and Bradley Fletcher (who was burned more than a charcoal briquette back then) and there didn't seem to be much hope of better players in the program if they were the best we could send out there.  (A year later, of course, Dalton was quickly replaced by Tyler "Motherfucking" Sash and Fletcher transformed himself into an NFL draft pick.)
Offensively, Iowa went from having one of the worst offenses in football in 2007 to having... well, a more timely offense, at least.  Statistically, it's still not very good in most respects, but the ability of the 2009 Iowa team to come through in the clutch is almost unprecedented among other Ferentz Era teams.  The 2007 team lost a pair of games in the fourth quarter (at Wisconsin and at Iowa State); the 2009 team has come from behind in the fourth quarter in four of its wins this year (and came from behind to send the game OT last weekend).  A few of the faces remain the same from 2007 -- DJK, Tony Moeaki, Bryan Bulaga, Rafael Eubanks (to name a few) -- but experience and maturity have improved their performances tremendously. 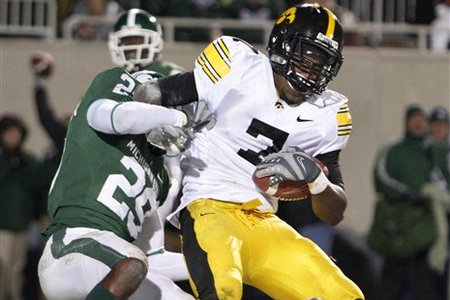 Marvin McNutt owns the slant route and don't you ever forget it.

Since that loss to Western Michigan, Iowa has gone 18-6.  That run has included a pair of upset wins over top-five teams (Penn State, twice), a program-best 9-0 start this year, wins over every Big Ten team but three (Ohio State, Illinois, and -ugh- Northwestern), a rare win over Iowa State in Ames, a 55-0 demolition of Minnesota in the final Gopher game ever played in the Metrodome, a dominant Outback Bowl victory, and perhaps more come-from-behind wins than in all the other years of the Ferentz Era combined.  And while all six of those losses have been painful in their own way, there's something to be said of the competitive spirit that's been on display in all of them as well.  The 2007 Western Michigan game was the fourth game that year that Iowa lost by nine or more points -- none of the six subsequent losses have been by more than seven points.

The journey of 2009 is far from over -- a 10-win season is still in our grasp, there's some Gophers to destroy, a big bronze pig to keep, and a bowl game somewhere warm to win -- but on this day, the anniversary of one of the darkest and most depressing moments in recent Iowa football history, it's worth taking a moment to stop and think about how far we've already come in such a short period of time.  The pain of losing the de facto Big Ten Championship Game to Ohio State stings, but it feels a hell of a lot better than the ache of losing to Western Michigan and being lost in the college football wilderness. 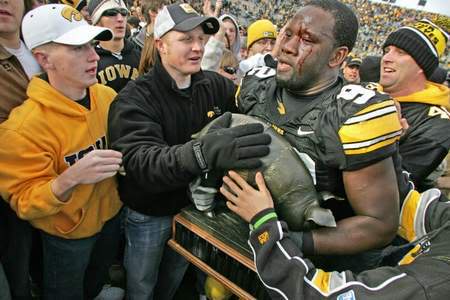 Kenny bled to get that pig back, man.  Floyd is ours, dammit.