Share All sharing options for: A Winner is You! 133 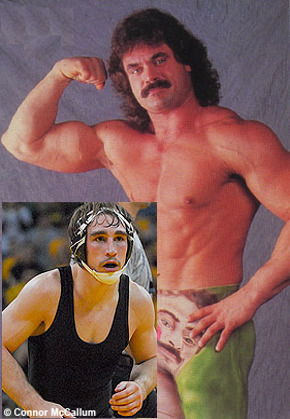 What We Already Know
Dan Dennis (SR) emerged as the man at 133 lbs. last year in a bit of an upset, taking over for Joe Slaton (SR), who was a runner-up at the 2007 NCAA Tournament.  While Dennis was viewed as a good wrestler, it was tough to see him supplanting a guy who was national runner-up the year before.  But injuries and Slaton's difficulties making the weight cut to 133 lbs. gave Dennis an opportunity and he took it and never looked back.  He went 31-6 last year, including 20-2 in duals (8-0 in Big Ten duals), and finished 5th at the Big Ten Tournament. He finished a somewhat disappointing 7th at the NCAA Tournament last year, but the points he earned for fighting back to finish in that spot were invaluable in securing the national championship for Iowa.  Dennis seemed to peak a bit too early last season; he was on a tear in December and January, but seemed to run out of gas a bit by the time the Big Ten and NCAA Tournaments rolled around.  Hopefully he can get himself peaking at the right time this year; he showed last year that he has the ability to hang with (and beat) the top guys in the weight class -- now he just needs to do it when the lights are shining their brightest.

Who Else Is An Option
Slaton, the national runner-up from two years ago, is back for one more year, which would give Iowa ridiculous depth if Slaton wasn't dealing with a handful of issues: nagging injuries (a back injury kept him from competing in the recent wrestle-offs), legal woes, and the fact that he's essentially moved up to 141 lbs.  That move is unsurprising given Slaton's struggle to make weight last year (one of the reasons he didn't see much action).  Slaton's departure leaves highly-touted recruit (and local boy -- he went to Iowa City West) Nate Moore (RS FR) as the heir apparent at 133 lbs.  He lost to Dennis in the wrestle-offs, 5-3, and lacks much in the way of experience, but he is a talented prospect.  Still, given the nasty depth at this weight class (both within the Big Ten and nationally), losing Dennis this season might cripple our chances of earning many points from  this weight class come tournament time.  Nick Trizzino (FR) and Mark Ballweg (RS FR) are two other options at 133, but they're likely behind Moore in the pecking order.

Who Are The Major Threats
Remember the last few weight classes and how they were a bit lacking in depth (especially in terms of the Big Ten)?  Well, this class is nothing like that -- it has a a ton of depth, both nationally and within the Big Ten.  The main threat is unquestionably Michigan State's Franklin Gomez (SR), the two-time defending Big Ten champion and last year's NCAA champion as well (he also had a third-place finish in 2008).  Dennis is actually 1-0 lifetime against Gomez (he beat him 3-2 early last season), but no one should underestimate Gomez -- he's still an excellent wrestler who's defeated many of the top guys.  It's no accident that he's won the last two Big Ten Tournaments or last year's NCAA Tournament; while Dennis was peaking in December and January, Gomez was peaking in February and March.  Aside from Gomez, the Big Ten also boasts threats from Minnesota's Jayson Ness (SR) and Wisconsin's Tyler Graff (RS FR).  Ness finished third in the Big Ten Tournament and fourth in the NCAA Tournament last year, although Dennis kinda owns him (2-0 against him last year).  Outside the Big Ten, the major threats are likely Boise State's Andrew Hochstrasser (JR), Iowa State's Nick Fanthorpe (SR), and Cornell's Mike Grey (SR).  Last year, Dennis went 1-0 against Fanthorpe, 0-1 against Hochstrasser, and 1-1 against Grey.  Needless to say, the competition at 133 lbs. is going to be brutal -- Dennis is going to need to be at the top of his game to make some noise in this weight class, especially when March rolls around.

What We Reasonably Expect To Happen
This is such a fiercely competitive weight class featuring so many experienced and talented challengers that it's really difficult to get a read on things.  That said, Dennis is no slouch himself -- he's beaten many of the other top challengers in the past and he's a pretty experienced and talented wrestler in his own right.  If he can get things peaking at the right time, there's no real reason he can't make a solid run for high finishes at both the Big Ten Tournament and the NCAA Tournament.  I think expecting titles is a bit much so long as Gomez stays healthy, but a Top 3 finish at the Big Ten Tournament and a Top 5 finish at the NCAA Tournament seem quite reasonable.