Share All sharing options for: A Winner is You! 197 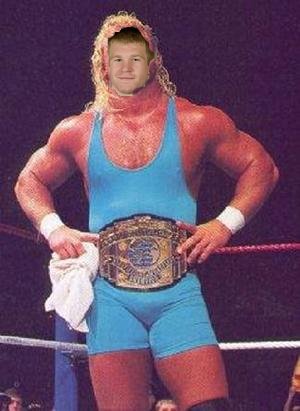 This is totally what Chad Beatty looks like.  Yep.

What We Already Know
Chad Beatty (SR) was thrown into the deep end at 197 lbs. two years ago, as injuries forced the Iowa coaches to send the undersized Beatty (who also wrestled at 174 lbs. and 184 lbs. that season) out to man the spot and attempt to pick up some points (or at least avoid forfeiting a match in every dual meet).  Unsurprisingly, Beatty went just 10-12 that year (3-5 in Big Ten dual meets), although he did pick up a few clutch wins, including a big upset win over Michigan's Anthony Biondo that enabled Iowa to win the meet and continue its unbeaten streak in dual meets (a streak that is still alive going into this season).  After a year of bulking up and specifically training for 197 lbs., Beatty had a much improved junior season, going 19-6 (7-1 in Big Ten dual meets), although he was hampered by a knee injury, particularly right before the NCAA Tournament.  When healthy, Beatty has developed into a solid, dependable wrestler: he beats the guys he should beat and is competitive with the top guys (he had only one loss last year that was worse than a decision).

Who Else Is An Option
The only other guy to compete at 197 at last week's wrestle-offs was Luke Lofthouse (JR), who lost to Beatty, 7-3.  Lofthouse has precious little recent experience, going just 1-2 in official competition last year.  Fun fact: Lofthouse has been at Iowa since 2004, having taken a couple years off for a Mormon mission.  Let's be realistic: Beatty may be no phenom, but there appears to be a fairly substantial drop-off from him to the Stormin' Mormon, so our prospects of garnering points looks pretty slim if something happens to Beatty.

Who Are The Major Threats
Good news: this is another weight where the Big Ten is pretty weak.  There are only four Big Ten wrestlers represented in the preseason top twenty, and only one of those makes the top ten (Trevor Brandvold (JR) of Wisconsin; Beatty himself checks in at 12).  Bad news: this is a pretty loaded class outside the Big Ten, particularly in the Big 12, which features three of the preseason top four, including the top two (the stupendously talented but crushingly dull Jake Varner (SR) of Iowa State and Craig Brester (SR) of Nebraska, respectively).  Beatty's never wrestled Varner (he was out with an injury when those teams tangled a year ago) and is 0-1 against Brester.

What We Reasonably Expect To Happen
To be blunt, expectations for Beatty are not nearly as high as they are for many other Iowa wrestlers.  He's very solid and deserving of considerable respect for the way he stepped into a tough spot in 2006-2007, but this should be a pretty brutal weight class.  Given the relative weakness of the Big Ten, he probably can make a decent run in the conference tournament, but the NCAA Tournament will be far trickier.  I think he's a fringe All-America candidate and anything beyond that would probably be gravy.