There were other games played.  Stuff happened.  Dickheads won, dumbasses lost, many points were scored.  So Wha Happened? 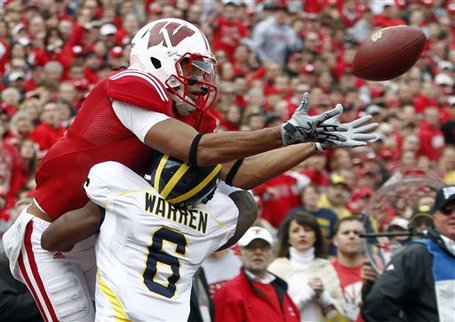 Even if they cheat, Michigan's defense can't stop anyone.

Wisconsin 45, Michigan 24
The Punch-A-Bully-While-He's-Down Tour stopped in Madison this week, and the Badgers were all too happy to take their pound of LOLverine flesh.  For the fifth straight game, the Big Ten's worst defense gave up thirty or more points -- in fact, the Michigan defense has given up thirty or more points in all but one of their conference games (a 26-20 OT loss to Michigan State that began their current tailspin), an ignominious accomplishment that no other Big Ten team can match.  Scott Tolzien had a fine day (16/24, 240 yards, 4 TD, 1 INT) and John Clay continued to firm up his resume for All-Big Ten first team and even Big Ten Offensive Player of the Year (if win-loss records didn't matter, Michigan State's Kirk Cousins or Purdue's Keith Smart might be shoo-ins, but win-loss records typically do matter), pounding away for 151 yards and a touchdown on 26 carries.  And assuming my crack research is correct, if Michigan loses next week and Indiana wins, then Big Blue will finish all alone in the Big Ten cellar for the first time since 1962.  Good times ahead for RichRod, no doubt. 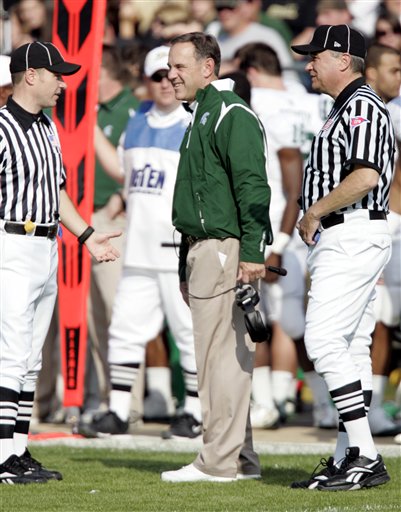 Mark Dantonio only looks like he's about to rip the official's throat out with his teeth.

Michigan State 40, Purdue 37
In what amounted to a playoff game for bowl eligibility (Purdue needed to win its remaining games to qualify for a bowl; Sparty needed only to split their remaining two games, and this was far more winnable than the season finale against Penn State), Sparty had one more bullet than the Fightin' Danny Hopes.  The highest-scoring conference game of the season turned into a sometimes sloppy shootout between two teams with rifle-armed quarterbacks and inconsistent (to be charitable) defenses.  Although, statistically, it was a damn odd game: Purdue killed them in total yards of offense (524 to 362), offensive plays run (92 to 49!), and time of possession (40:39 to 19:21).  But Michigan State was all about the big play yesterday.  Their first touchdown was a fumble return on the game's first play from scrimmage.  Their second touchdown came on a three-play drive that featured a 55-yard pass.  Their third touchdown was a one-play drive with a 73-yard touchdown bomb.  Their fourth (and final) touchdown drive was set up by a blocked field goal and a 45-yard run.  Plus, they made not one, but two 52-yard field goals.  (I covet Brett Swenson.  I covet him very much.)  Joey Elliot channeled the spirit of Purdue gunslingers past and had himself a fine day -- 39/55, 373 yards, 2 TD, 0 INT -- but it wasn't enough and the Boilermakers will be sitting at home for a second straight season.  At least their fans can enjoy basketball season. 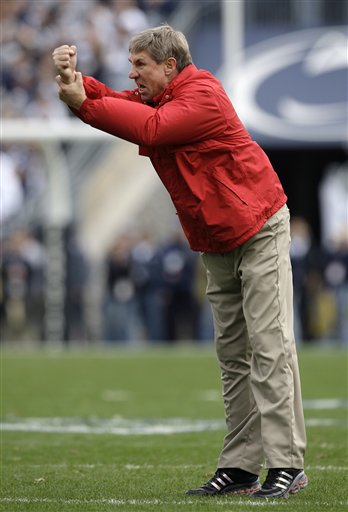 Bill Lynch: not a fan of Big Ten officiating.

Penn State 31, Indiana 20
Indiana forced four turnovers in the first half, conceded none, jumped out to a 10-0 lead... but still found themselves in a 10-10 stalemate heading into halftime.  Why?  Because they are Indiana football and that is just what happens to them, especially this year.  Bill Lynch again looked like he wanted to choke a bitch Big Ten official after they ignored a potential holding call on Evan Royster's game-tying touchdown run at the end of the second quarter, but the story of Indiana's frustrations this season isn't the screwjobs they've gotten from the refs on more than one occasion.  No, it's in their dumbfounding inability to convert the staggering amount of turnovers they've forced into more actual points.  Yesterday they converted those four turnovers into one touchdown.  Two weeks ago, the six turnovers they forced against Iowa led to just three points (remarkably, none of their three touchdown drives came after Iowa turnovers).  The week before that, they turned three second-half interceptions from Mike Kafka into zero points.  In the only other game in that span, against Wisconsin two weeks ago, they forced only one turnover but did manage to turn it into a touchdown -- huzzah for efficiency!  All told, that's 14 forced turnovers in the last four games, leading to a combined seventeen points.  Not coincidentally, they're also 0-4 in those games and they've now been officially eliminated from bowl contention.  As for Penn State, the first half looked like an ugly hangover from the Ohio State game, but the second half was a respectable effort that kept them on pace to win ten games this season. 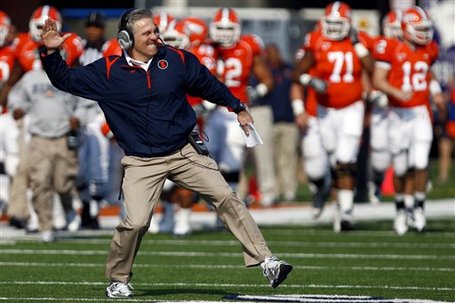 It's all comin' up ZOOKER, baby.

Northwestern 21, Illinois 16
Oh who fucking cares.  Did the ground open up and swallow both of these teams and their glorified Monopoly piece trophy and cast them into the deepest bowels of Hell?  No?  Meh.  Watching Jim Tressel try to decide which sweatervest to wear would have been more entertaining than the first half of this game, which featured incompetent offenses and at least three missed field goals.  Action picked up in the second half, but, again, who gives a fuck?  Illinois locked up another bowl-free season, continuing the really positive run of momentum they've had since that Rose Bowl run two years ago. 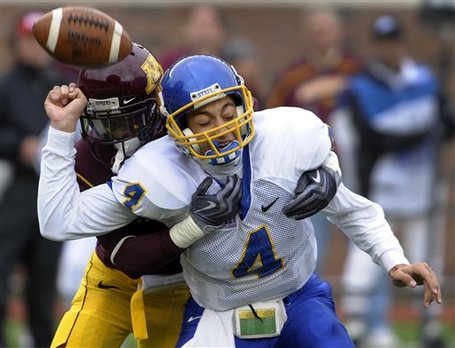 PLAYING QUARTERBACK: UR DOIN IT WRONG.

Minnesota 16, South Dakota State 13
Another week, another dreadful offensive performance by the Gophers.  Their lone touchdown was a fumble returned for a touchdown that they needed to take only three yards to get into the end zone.  Two of their three field goals came from short fields set up by turnovers (Jackrabbit QB Thomas O'Brien was, sadly, a turnover machine yesterday: he had a pair of interceptions and a pair of fumbles).  While some credit is due to SDSU for buckling down in the red zone, this sort of incompetence is hardly new to Minnesota's offense this year.  Aside from that offensive explosion against Michigan State on Halloween (and considering how many other teams have sliced up Sparty's defense, Minnesota's performance against them doesn't look quite as impressive), their offense has been dormant for some time: they've amassed fewer than 300 yards of total offense in four of their last five games.  But, hey, at least they got that crucial sixth win -- now they can start making travel plans to the Pizza! Pizza! Bowl.