Share All sharing options for: A Winner is You!  174 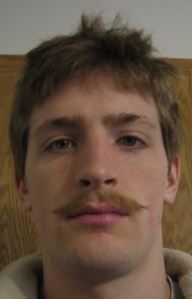 That is the mustache of a CHAMPION.

What We Already Know

The consensus opinion is that Jay Borschel (SR) had a disappointing year last season, in large part because of a troublesome knee injury and a disappointing, underachieving finish at the NCAA Tournament.  In terms of the stats, though, Borschel's 08-09 season wasn't too far off the marks he set in 07-08.  He had three fewer wins (from 32 to 29), recorded one fewer dual meet win (20 to 19), recorded the same number of pins (7), had four fewer major decisions (11 to 7), and actually managed to score more team points in dual competition (79 to 81).  But the ultimate measure of an Iowa wrestler, particularly one as talented as Borschel, is what he does at the end of the season and in that regard, Borschel did come up short last year.  He posted a second-straight third-place finish in the Big Ten Tournament, but went just 2-2 in the NCAA Tournament and finished out of All-American status, which was a disappointing way to follow-up a third-place finish at the NCAA Tournament in 07-08.  Stylistically, Borschel is somewhat inconsistent, capable of putting on both an explosive, aggressive offensive display and a tentative, more defensive effort.  When he's really on his game, Borschel's attacks can be difficult to stop and he can rack up a lot of points for Iowa.

Who Else Is An Option
Like so many guys on this team, Borschel is a three-year starter, so unless he absolutely loses the plot and stinks up the joint, the only way his understudy will be seeing the mat is if he gets injured.  And, as with so many of the other veterans wrestlers on this team, the drop-off from Borschel to the proverbial "next man in" is relatively severe.  According to the wrestle-offs, that "next man in" is Ethen Lofthouse (FR), a true freshman out of Utah (which is an unexpected hotbed of wrestling talent; Iowa has three guys from the Beehive State and the legendary Sanderson clan hails from there as well).  Lofthouse was a highly decorated prep wrestler and had a respectable result against Borschel in the wrestle-off (losing 8-3), but as a true freshman, he'll almost certainly redshirt this season unless Brands has no other option.  If Borschel is forced to miss time, Grant Gambrall (RS FR) may be the most likely replacement; he's been working at 184, but he's also listed at 174 on the official roster.

Who Are The Major Threats
Fortunately, the talent in this class is relatively diluted.  Most notable among the departed wrestlers is Michigan's Steve Luke, last year's Big Ten and NCAA Champion.  All told, only three of last year's top eight finishers at the NCAA Tournament return this season, and one of those three (Penn State's Quentin Wright) is planning to redshirt this year.  Only two of the preseason top ten at 174 hail from the Big Ten (Borschel checks in at #4 and Jordan Blanton of Illinois logs in at #7) and only five of the top twenty at 174 are from the Big Ten; it's pretty safe to say that 174 is not a loaded class in the Big Ten, which should bode well for Borschel.  Outside the Big Ten, Borschel's biggest obstacles may be Central Michigan's Mike Miller (JR), last year's national runner-up and this year's preseason #1, and Cornell's Mack Lewnes (JR), last year's #1 seed at 165 entering the NCAA Tournament (where he suffered two shock defeats in an early exit) and this year's preseason #2 at 174.  Borschel holds a 1-1 career record against Miller (winning a 6-1 decision early last year and losing a 6-3 decision later in the season).

What We Reasonably Expect To Happen
This appears to be a relatively wide open weight class.  With Luke gone and Wright redshirting, the Big Ten may be Borschel's for the taking; at the very least it would be nice to see him make the finals this year after a pair of third-place finishes.  At the NCAA level, Miller and Lewnes should provide solid challenges, but if Borschel can avoid another early flameout in the NCAA Tournament, there's no reason that he shouldn't be able to make a deep run and contend for the title.  He has the talent and experience to do so; it's just a matter of staying healthy and keeping the proper mindset.  And, of course, rocking that sweet fucking 'stache.

Now there's a man who knows a thing or two about the power of a good mustache.