The Hawkeye defense is more than capable of shutting down Terrelle Pryor and the Buckeye offense.  What we need to win this game is a little more offensive firepower.  I understand that Ken O'Keefe doesn't like change, but we live together and if I can convince him that the Smurfs live inside his television, I can convince him to add a few wrinkles to the playbook this week.  Specifically, I have 4 plays that I believe will consistently produce touchdowns.  You heard me right.  Four touchdown-scoring plays (TSP's) that I am going to share with you right here, right now.

I know what you're thinking.  If I post these plays on the internet, the Ohio State coaches will inevitably see them as they troll BHGP for the next few days and then gameplan for them, but that's where you would be wrong.  My TSP's are undefensatiable.  So, fuck 'em.

I've heard some murmering in the comments about running a "Wildcat" formation.  First of all, I don't ever fucking want to hear anyone call it the "Wildcat" again.  I hate that fucking word.  Maybe Florida International calls the I-formation "a clown getting fingerfucked by a midget."  I don't care.  It's still the I-formation.  Let the Miami Dolphins call their dog and pony show the "Wildcat."  I'll call it what it is.  The fucking single wing.  And that leads me to my first play.

We'll be using the 'spinner' variation of the single wing (seen here.)  Vandenberg lines up directly under center with McNutt 6 yards deep and Wegher on the right..  DJK will line up at the left wing and Stross will be split wide right.  The center snaps the ball through Vandenberg's legs, directly to McNutt, who spins left and with his back to the line of scrimmage fakes the ball to Wegher as he runs behind him.  Wegher carries out his playfake to the right and McNutt hands the ball to DJK going in the opposite direction.  While the Buckeye defense huddles back up to try to figure out what is happening to them, DJK streaks around the left side for however-many-yards-he-wants and a touchdown. 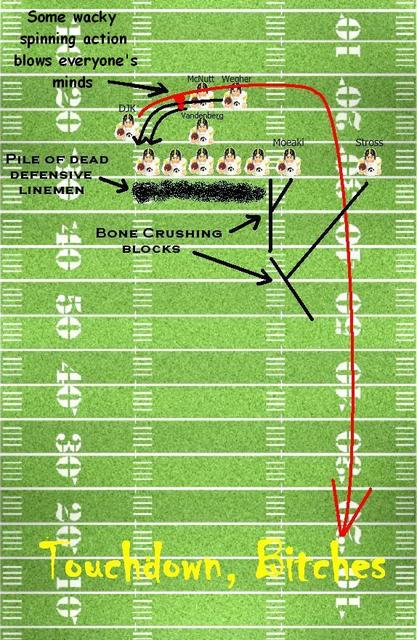 When we run that play again on our next offensive series, all 11 of those goofy bastards will be chasing DJK toward the sideline when they eventually realize that McNutt handed it to Wegher this time and he's galloped 80 yards down the opposite side of the field into the endzone. The best part about this formation is that we can run that crazy spinning shit all day long and the defense will never catch on.  My high school won 3 state titles in 10 years running this shit, so clearly it will work in division I football as well.  In fact, I'm pretty sure there are a couple of commentors on here that held up one of those trophies that can vouch for the infinite successfulness of the single wing.

After scoring touchdowns in this offensive set for the entire first half, McNutt will start to get dizzy from doing so much spinning, and we'll have to go back to the old bread and butter.  A nice, easy run play.  With a twist of awesome.  Brandon Wegher will get to rest for a quarter and Adrian Clayborn will fill in at running back.  This play practically diagrams itself: 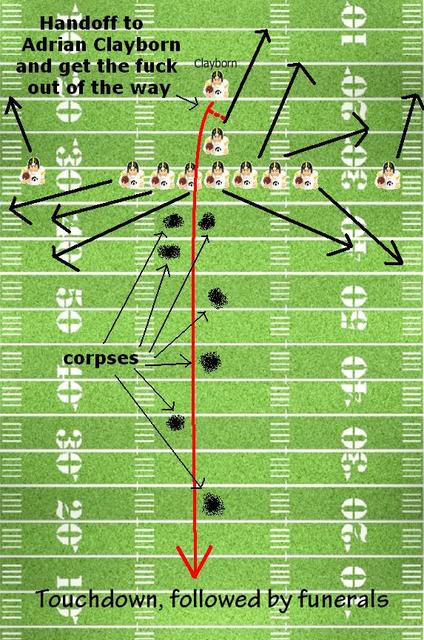 This play we run until Clayborn's jersey is too OSU-blood-stained to stay in the game.  At this point he goes into the locker room to change and we decide to tone it down and line up in a seemingly normal formation.  The defense sighs with relief.

And then it happens:

Well feed me a bowl of toasted snail penises!  It's the dreaded triple reverse! 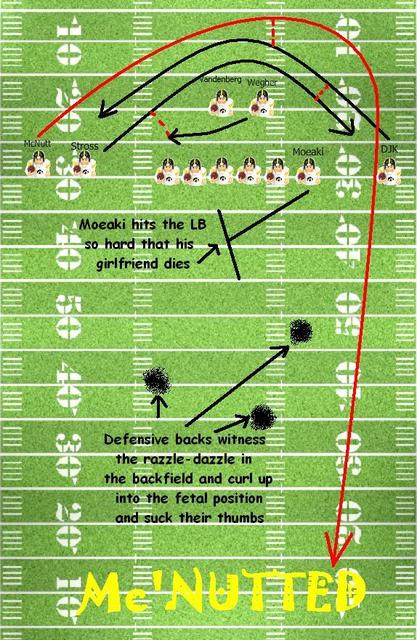 Sure, teams have been able to contain our reverses, but I'd like to see anyone try to stop Vandenberg to Wegher to Stross to DJK to McNutt.  Fuhgettaboutit.  By the time Stross hands it to DJK, the Buckeye defense will be weeping over a pile of their own tangled panties.  I only see the need to run this play once.  Just to give the fans a show, you know.

At this stage in the game Iowa should have roughly 700 yards rushing and be up by 50 or 60 points, but since AP voters  like to see some spectacular pass plays, I have one more TSP that we can run repeatedly the entire 4th quarter.  I figure Vandenberg would be bored at this point anyway, so it will the perfect time to unleash the deathcannon inferno of an upper appendage that he possesses.  From what i can tell, his arm is so powerful that it's difficult for him to throw the ball less than 45 yards at a time.  This play will work around that minor flaw. 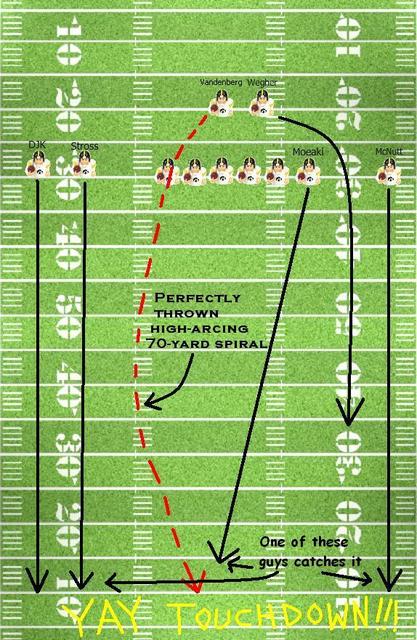 Nothing fancy here, folks.  Just your run-of-the-mill tight-spiraling 70-yarder into the outstretched arms of a receiver in the back of the endzone.  This is where we flat-out embarrass them.  This is where we earn those style points that we so desperately need.  This is where our freshman QB shows us why he was chosen as the successor to greatness.  And this is where we make a new t-shirt*: 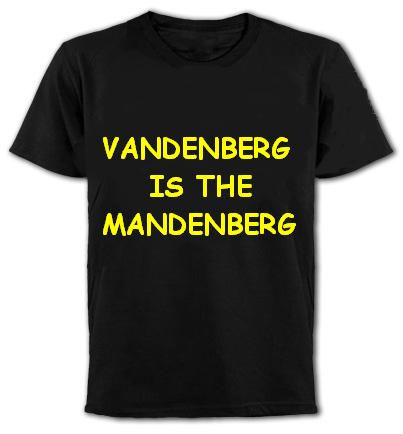 BHGP t-shirts speak only the truth

Think about it.  You could be looking at our new game plan.

Or we could just stick with the smash-em-up-six-seconds-of-pounding-the-ball-down-their-fucking-throat offense combined with our cracking-skulls-together-bloodshed-carnage-and-deathblow-annihilation defense that has gotten us this far.