Share All sharing options for: On Mark Becker, Ed Thomas, Insanity, and Justice

This is not a fun topic. Laughs will commence tomorrow morning. 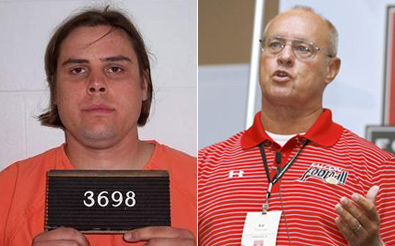 As the Des Moines Register reports, Mark Becker was declared mentally competent to stand trial yesterday. This ruling from judge Stephen Carroll comes in the face of testimony from two different psychiatrists - one paid for by the defense and one from the prosecution - who disagreed on whether Becker could stand trial. Carroll's ruling prompted a FanPost with a headline that included the phrase "justice will be served." That much is likely true. But not in the way people generally interpret the phrase.

As I wrote for SbB earlier this morning, there's an important distinction between being declared mentally fit to stand trial and being declared sane at the time of the alleged crime. In other words, this ruling by Judge Carroll doesn't mean that Becker's not going to be able to escape a guilty verdict; he and his lawyer, Susan Flander, still plan to avoid a guilty verdict by reason of insanity at the time of the crime.

And now the hard part: if he's judged to have been insane, that too is justice.

Nobody's arguing that Becker didn't pull the trigger or that he didn't kill Ed Thomas, a beloved man who by all accounts did not deserve to die. In fact, the very unprovoked nature of the crime is going to be part and parcel of Flander's defense--why would Becker or any other sane man do this? Indeed, near the time of the killing, Becker had been admitted to a local hospital for psychiatric evaluation and should never have been released to the public afterward. Even the judge agreed that Becker had been suffering from schizophrenia and hallucinations, two horrific conditions you should pray never to experience. We have family friends who did; but for the grace of God (or, if you prefer, sheer luck), they ended up hurting nobody and are living better lives under better medication.

This is not to declare any sympathy for Becker, mind you. He did commit a most heinous act, even if the next step of labeling  it a "crime" remains to be seen. But that's just the point: it remains to be seen. And though our initial reactions were horror, revulsion, and anger, those are no substitutes for the rule of law and they do not ever trump the rights of the accused. This, too, is the unpopular but wholly necessary side of American freedom.

Indeed, aside from both the Becker and Thomas families, some of our greatest sympathies lie with Flander, whose job it is to defend, represent, and advocate for Becker. Though many would happily boast that they'd never defend someone like Becker, as a public defender, it's Flander's job to do so. Moreover, it's not Flander's job to determine whether Becker's guilty or innocent; it's up to her to provide as much evidence as possible that he may not be guilty, just as it's the prosecutor's job to argue otherwise.

By the way, even if Becker's declared not guilty by reason of insanity, that's not a free ticket home at all; criminal insanity is a ticket to institution, not freedom. Whether you'd like a ticket to a cell block instead of a psychiatric facility where they assume you'll kill if you have the chance is not a very fun choice, after all. An insanity verdict - essentially the only way out of the typical + / - legal dynamic - is hardly a better case scenario than prison.

It sounds simple and obvious to make that point, but if you assume that one side's good and one side's bad in a lawsuit (this is goes beyond simplistic and straight to stupid, by the way, but there's a point to it) someone still has to be the "bad" lawyer, and that distinction isn't determined by personal ethics. After all, it's not a lawyer's job to determine guilt or innocence. If every public defender chose their cases by the immediately obvious merits, it'd be a far greater miscarriage of justice than what normally takes place (and certainly an incentive to frame and blackmail).

And look. I too was devastated and horrified by the Thomas killing; I had saved the SI with the article from when he was named Coach of the Year, and I regret that various moves have removed it from my possession. I was mad enough about the killing to cover it fervently the day that it happened.

But what I want, what you want, and what every Iowan with an emotional to the slaying wants still takes a backseat to the law. After all, that's part of what makes our country great, and easy feelgood departures from the room of law are the domain of less-civilized countries. Perhaps those who want Becker to be put to death would feel better there. For us, we'll put this in the hands of our legal system, where justice is blind, and where dispassionate reasoning can tell us if the killer of one of the most beloved Iowans of the last half-century deserves to spend time in prison or psychiatric treatment. To put your own desires above that is simultaneously selfish, childish, and anarchic. Be better than that. Please.