Share All sharing options for: The Takeaway: Arkansas State

Sure, Iowa just eked out a win against Arkansas State, 24-21. But how much do we really know? What was really important about beating A-State? What does it all mean, Basil? The Takeaway has the answer. 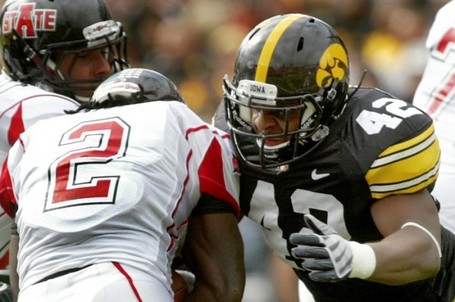 Things that were not a problem: Rush defense. There, that's the whole list.

Well, that went just great: We had said before the game that we wanted to see the following things:

Okay, that would be a NO, KINDA BUT NO, NO, and ROR NO. Bryan Bulaga looked, frankly, like someone who had missed three weeks of gameplay. Stanzi had a good first half, but after his third touchdown of the game to open the second half, Bad Ricky finally showed up and brought A-State back from the brink. The defense was middling, though the rushing score streak remained intact (more on that in a bit). And at the very least, Moeaki is practicing again with the intent to play against Michigan. Fingers crossed.

What ended up happening isn't that it was a "trap game" or that ASU had any reasonable shot of winning. It's that a combination of lackluster focus, a four-year starter opposing quarterback, and poor playcalling helped get a clearly inferior team back into the game when they had no business being there as Iowa (successfully) played not to lose. In other words, it wasn't UNI 2009, but Purdue 2008. Remember that one? Shonn Greene goes bananas on Frank Duong, but a middling second half and random small mistakez aplenti means Purdue climbs back in late and the final's only 22-17.

The good news? You might remember what happened when Iowa had a more high-profile game the ensuing week. Kinnick North, bitches. In other words, you may not want to spend too much time extrapolating doom-and-gloom scenarios from this game. Maybe.

Hey, this play's working. Let's almost never run it: First, we have to talk about the playcalling. This was a 24-21 game that frankly ought to have been about 42-14. That Marvin McNutt only had four catches and 121 yards is a damned travesty, because he was bitchmaking like his name was Iowa Defense. 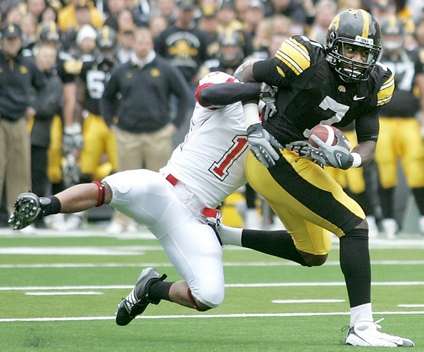 We would suggest calling McNutt "The bitchmaker," but come on; his name is Marvin McNutt. That'll do.

We're just astounded that the Iowa coaches didn't attack the ASU corners and safeties outside the hashes more often. It's clearly not that Stanzi doesn't have the arm for it; all three of his touchdown passes were pretty, and the couple failed attempted to go downfield didn't exactly seem to us like signs that the deep ball was closed for business. And yet time and time again, it was stretch zones, usually to the right (where Julian Vandervelde was channeling his 2007 self and getting utterly worked). Either that or play-action passes within 10 yards, which, whatever guys.

We're not saying that Iowa needed to pull a RUTS for the rankings' sake or any of that nonsense. That stuff does not matter unless it's time for the type of talk that everyone agrees is premature: BCS. No, the problem is that Iowa could have put A-State away by throwing wheel and fade routes all day long (see the second half of Northwestern, 2007) and they just wouldn't go downfield. 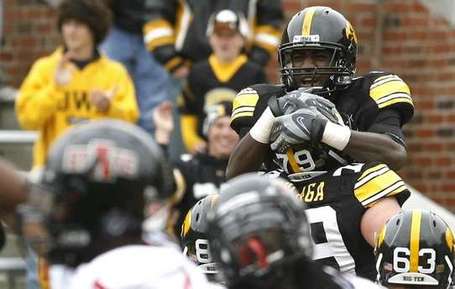 It didn't help, of course, when Stanzi gave the Red Wolves their second touchdown with one of the most horrendously lazy and ill-advised throws we've ever seen in Division I football. That is not an exaggeration. If Stanzi had turned around and tried to punt the ball through Iowa's uprights, it would have not have been a considerably worse decision than that throw. If Jake Christensen had done that, JC6 would have been murdered by a sniper in the press booth before he could get to the sideline, and the police wouldn't have bothered looking for the shooter. Hell, it would have been the largest cheer from the crowd on the day. Holy shit what a terrible fucking throw. That throw gave my eyes AIDSAWAC (Auto-Immune Deficiency Syndrome Also With Ass Cancer).

But why are the coaches even calling for a clearly hobbled DJK to run an underneath route, especially on 3rd down and with the linebackers playing short zone all day long? It's hard to figure out who put Iowa in less position to succeed there. That's like running a reverse with "Mr. 4.8 40" Dominique Douglas in the fourth quarter of a bowl game where you're losing by one point and oh wait this is Iowa and never mind I should expect the horror by now.

So the streak's still going. Great?: Okay, on one hand, it's really cool that Iowa has now gone for eight games and another quarter without letting someone rush into the end zone, and it's even better that they've won each of the nine games that streak encompasses. 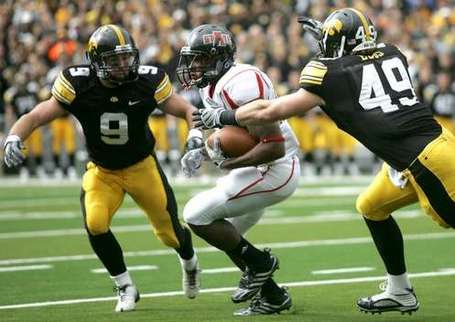 This, as you might have guessed, was not a touchdown.

But if Iowa's still giving up long drives and touchdowns, then it doesn't really matter how the other team gets into the end zone, does it? We're taking nothing away from the Iowa rush defense, of course; their efforts have been massive, and 25 rushes for 80 yards allowed is all sorts of studly, especially as ASU was gathering just 5.4 yards per pass play.

Still, for the second week in a row, the opposition put forward an interminable drive - this one for a touchdown, unlike PSU's 20-play field goal drive - where Iowa couldn't stop the 3rd down conversion (okay, they did once, but that was an easy 4th and 1 conversion after a 3rd and 27, which is unconscionable in its own right). Part of it is missing Shaun Prater, to be sure, and Prater's going to be back against Michigan. No more Willie Lowe is a good thing at this point, and lord only knows how bad Greg Castillo would have been out there.

Look, the streak's going ot end at some point, and odds are that it'll probably be during an Iowa victory--Iowa's favored by about a touchdown against Michigan, and we can't imagine that they'll be underdogs in any more than two of the final seven games of the season. Someone's going to take a pass to the one, then push one in for a score; either that, or they'll pull a Wisconsin 2008 and run wild on a defense comprised of Iowa's 3rd stringers, band members, and yippie dogs in Hawkeye sweaters. And that'll be that, really; after all, since the win streak started against Penn State, we can't remember when Iowa's red zone rush defense has even mattered to the endgame. Maybe Arizona, but eh. Cool stat, but ultimately trivial. 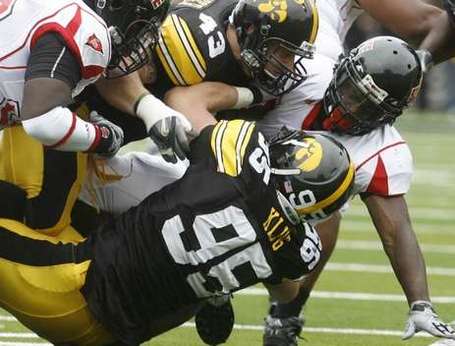 And finally, it comes. This is a big week. BHGP's doing the Iowa-Michigan tailgate, and it looks like we'll be setting up shop in the Myrtle Lot and getting started at around 9 a.m. on Saturday. We were angling for parking passes closer to Kinnick, but when they're running over $200 a pop... on the prior Sunday... yes, that's a bad sign. It probably isn't even worth asking if there's any BHGP readers who won't be using their passes for next week's game, right? Either way, let's do this, bitches. We've got the Kahlua and cream if you've got the Swedish Goose.