There's A Game On Saturday? Jonesin' for Indiana

Share All sharing options for: There's A Game On Saturday? Jonesin' for Indiana 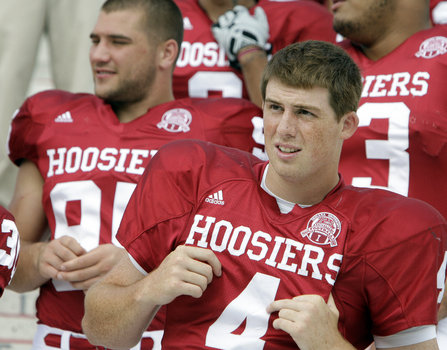 (If this guy beats us, we will give up on watching football. Or at least want to.)

Seems odd, but we've actually got a Big Ten home game this weekend. It's only Iowa's second in the last five games, which just screams conspiracy (hush that three of our last four are at home hush hush). You might think "home vs. mediocre opponent" = "big time win," but we should point out that Iowa's three biggest wins (ISU, PSU, Wisconsin) have come on the road. Okay, Arizona's tied for third; you get the point.

All of which is to say just because this is a game against a lightly-regarded team doesn't really seem to, well, matter to Iowa. All indications are that the Hawkeyes should roll--hell, a 17.5 spread for Iowa is like a 90-point spread for normal teams--but usually when Iowa's supposed to walk to victory, it ends up being a 60-minute nailbiter and we all end up feeling just dirty.

So let's see how dirty we'll feel tomorrow, shall we?

With Iowa on offense

This would be as good a proposition as any for Iowa this season--Indiana's defense is comprised of Jammie Kirlew, Greg Middleton, and the Chicago's starting nine from 1969. Ron Santo doesn't have any legs, so they put him at defensive tackle. They're bad.

Oh, but then Dace Richardson had to get struck by lightning once again, and Adam Robinson's ankle appears to have a javelin sticking out of it. And look, no offense to Brandon Wegher, but these last four games:

...have not been particularly impressive or confidence-inspiring.

As we've mentioned before, though, Wegher has a curious knack for being tackled right as he touches the ball, something that almost no tailback would be able to overcome en route to a productive outcome. Meanwhile, if Wegher ever gets the ball in space (screen, draw, the rare well-blocked run), he's more than competent.

That makes us wonder one thing: is Iowa inadvertently tipping the run when Wegher's in the game? Whether it's a matter of a smaller playbook for Wegher or something in the way he lines up, whatever. It would take far more intensive tape study than we're about to do, of course, but we can't think of any other reason why Wegher would have a tackler waiting for him right at the handoff while Robinson faces the "normal" amount of heat from the defensive front. It's not that Wegher's a bad runner when he's in space or that he's making the wrong cut; he normally just doesn't have a prayer of even getting to that first cut.

The good news is that if Iowa can keep Middleton and Kirlew off Wegher 90% of the time, White Lightning has a good chance at a big day. He's a hell of a runner once he gets going, and you may see some flares to the flats just to get him in workable one-on-one situations with a cornerback or linebacker in space. Better than a handoff for a loss of two.

Alternatively, KOK can just say "the hell with it" and just start chucking it deep 50 times. After all, Indiana's down to about two healthy bodies at safety, and they seem to take a horseshoes-and-hand-grenades approach to pass coverage: if they're close to the target, that's probably as good as you can expect. Meanwhile, the Unholy Trinity of Trey Stross, DJK, and Marvin McNutt is looking as good as ever. No stupid passes, s'il vout plait, Monsieur Stanzi, but there's potential for serious productivity there.

Then again, last time we said that, Stanzi had 78 yards of passing with 90 seconds left in the game and a 13-9 deficit. So, yeah.

With Indiana on offense

Ben Chappell isn't bad, which is really weird to say, because Ben Chappell used to be bad. He's no Kellen Lewis, of course, and he's better than 2008 Ben Chappell - that guy got utterly bitchmade by Iowa in Bloomington last season. Bitchmade in Bloomington? Like a sequel to Sleepless in Seattle? Meg Ryan can play Chappell, of course.

They're going to have to get creative and force Iowa into exploitable matchups on the outside, though, because we're really at a loss trying to figure out how Indiana's going to put together a sufficient rushing attack to make the linebackers' lives uncomfortable. The Hoosiers aren't usually that bad on offense--they've got perhaps the most underrated line in the BXI--but too many of their points have come on the big play, which is a far less reliable engine of productivity than the good, old-fashioned 10-play drive.

The Hoosiers' weapon of choice on the ground is Darius Willis; whatever. He's averaging well over five yards a carry, but hold on there kids; we may have some outliers. Indeed, Willis has a 70-yard TD and 85-yard TD to his credit; take those away, and Willis has just 250 yards on 75 carries. 3.33 ypc, if you were curious. Yes, the big runs are part of his game too, but let's not pretend Willis is a clock-chewing big back giving the offense 2nd and medium all game long. He's a home run back, and one who hasn't rushed more than 16 points in a single game. He can be shut down with relative ease.

Chappell and the passing offense should be mildly competent; any time you get an experienced quarterback with a decent line, the proverbial bitchmaking becomes less and less likely. So as nice as a shutout sounds, it's unlikely.

Still, this has the potential to be one of the Iowa defense's shining moments of the season. If Chapell doesn't throw at least two interceptions (one of which won't be his fault), we'll be surprised; we don't see the talent necessary for a big enough game through the air to seriously threaten Iowa.

We're calling this 23-9 right now; we could probably see Iowa's score anywhere from about 16 to 40, depending on how effectively Stanzi can attack that secondary, and we could probably see Indiana scoring anywhere from 0 to 24. That 24 would likely come with some garbage points; we don't think Indiana gets into the end zone three times against an Iowa defense that's actually trying for all 60 minutes.

Look: this is a game that a real #4 team, tailback or no, wins by a substantial margin. They're at home, Indiana has holes on both sides of the ball, and the defense is absolutely humming right now.

Then again, we said Iowa rolls against MSU and A-State and loses to Wisconsin, so we clearly know nothing. Plan accordingly, and we'll see you Saturday morning. You're bringing the Bloody Marys, right? Dude, it's your turn. You do it.