The Road to Pasadena

Share All sharing options for: The Road to Pasadena 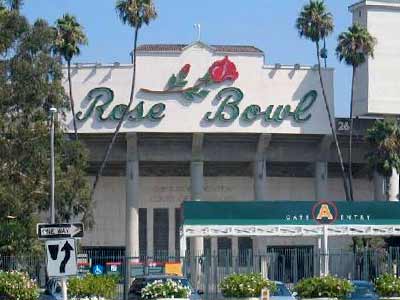 Let's do a little mental exercise today. Yes, we promised there would be no thinking on Thursdays, but like Tim Brewster's heart, promises were made to be broken.

What will it take to get Iowa to Pasadena? This could be either the Rose Bowl or the MNC (what? it's still mythical), since both are in Pasadena this year, and of any team in the Big Ten, Iowa's got the most reason to start pondering scenarios. Yes, yes, one game at a time, but that mentality only helps athletes. Thus, if you've got an Iowa Hawkeye in the room, please: cover his eyes or make him leave. There. No more problem.

Their only competition for the conference crown would be the winner of OSU @ PSU, taking place the week prior while Iowa faces just Northwestern. The winner of that game will likely only have one conference loss, though we should probably want Penn State to win; Iowa's already got a game and the tiebreaker on them, whereas Iowa doesn't have the head-to-head advantage on OSU. Yet.

Should Iowa go into Columbus and win, they're in such a commanding position for the Big Ten title that you may as well book the tickets for Burbank (don't you dare use LAX) right away. It would be the Buckeyes' second or third conference loss, and the only other team with one loss (PSU) would have to hope that Iowa loses two of their final three home games against Indiana, Northwestern, and Minnesota. All dangerous teams in their own way, yes, but the odds that Iowa loses two of those games are pretty small.

As far as the Rose/BCS Title game goes, obviously, carnage reigns in college football from week to week, and the title picture now will probably bear less resemblance than you'd think to its championship week iteration. Obviously, Iowa has no prayer of making the BCS if they lose any game from here on out, but they're probably closer to a strong position to make that title game than you'd expect. After all, the Big XII, SEC, and Pac-10 are highly rated for a reason; it's really hard to run the table in those conferences. The Big Ten too, but we can all agree that this is not the BXI's finest season. Let's just get that out there right now.

Thus, if Texas loses, there's likely no team that could keep an undefeated Iowa out of the title game. Yes, USC is ahead of them in the polls, but don't expect this pattern to continue if Iowa wins out. Voters love an undefeated team, and the computers already love Iowa. Likewise, if something wild happens in the SEC, as is usually the case, we could be looking at Iowa-Texas. Anything can happen.

Perish the thought, right? If this happens, OSU is in control of their own destiny to go to Pasadena (though Iowa's 11-1 record still leaves them in contention for an at-large BCS bowl bid). So if OSU wins out from here through their date with Michigan, there's nothing Iowa can do.

The good news is that they've already lost twice this season, looked frightful in their loss to Purdue, and have struggled to put away all but the worst of competition. They're not impressive, and that's primarily because Terrelle Pryor's not impressive. So if OSU runs the table against @PSU, Iowa, and @Michigan, they'll have to be playing their best football of the season--a level far above where they've been so far. So there's that.

Thus, if Ohio State beats Iowa and loses to anybody else, Iowa's got the Rose Bowl bid still; they've got the tiebreaker over OSU, and the Buckeyes' second BXI loss eliminates them from consideration. Seriously, Purdue made this situation so much easier.

In this seemingly unlikely scenario, Iowa still has the Big Ten championship in hand; even if PSU runs the table from there on out, the tiebreaker dooms them, and nobody else in the conference would have just one loss. Likewise if Ohio State wins every remaining game except against Iowa. At the very least, this scenario would remove all gnashing of teeth about the title game. It would also suck so hard.

Ho boy. Do not do this, Hawkeyes. In this case, Iowa, PSU, and OSU are all at 6-2, but Iowa has the tiebreaker by having beaten both of those teams. Hurray hurray.

Now, now the fun begins. Like above, Iowa, PSU, and OSU are atop the conference at 6-2. HOWEVA, they've split the three-way series at 1-1, which means overall record comes into play. Iowa and Penn State both went undefeated in the non-conference while OSU lost to some creampuff called "Southern California," which eliminates the Buckeyes. Iowa beat Penn State, so they're in.

Basically, the only way Iowa doesn't go to Pasadena is if Ohio State runs the table from here on out, including a win at the Shoe against the Hawkeyes in three weeks. Unfortunately, that's among the most plausible scenarios. They've looked miserable against good competition this year, but they're still Ohio State, and until they get that second loss in the Big Ten, they're a mortal threat to Iowa's Rose Bowl hopes.