A Winner is You! (If You're a Wrestling Fan, At Least)

Share All sharing options for: A Winner is You! (If You're a Wrestling Fan, At Least) 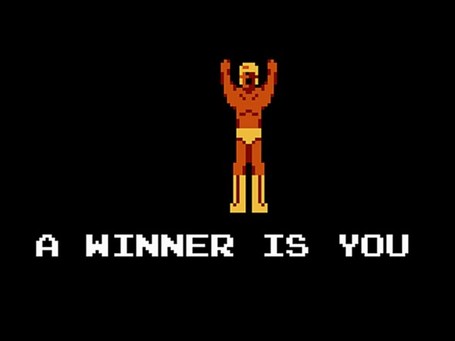 Television coverage of a winter sport we're good at?  The Big Ten Network finally announced its coverage plans for wrestling in the 2009-2010 season and things are looking up if you're fan of men in singlets:

The Big Ten Network will double its coverage of wrestling this season, with television coverage of the Big Ten Championships, the Midlands Classic and nine duals. In addition, the network will stream 15 more duals on www.BigTenNetwork.com.

The Iowa-specific coverage is as follows:

* - BTN is apparently totally overhauling their video streaming operation.  The good news is that the quality should be much improved; the bad news is that they're going to be charging for the experience at $2.99 a pop.

If caring about the life choices of sweaty 18-year old boys is creepy, then, um... Meanwhile, recruiting continues to go well for Tom Brands & Co.  Anthony Baldosaro, a two-time New Jersey state champion and the #9 recruit in the nation according to InterMat, verbally committed to Iowa recently.  He projects at 149 lbs, a weight class Iowa will have a definite need in after Brent Metcalf finishes his collegiate career this season, and seems pretty stoked about the whole Iowa wrestling experience:

"Iowa had more fans in their practice room than most schools have in their arena for matches," he said. "It's amazing how big wrestling is at that school. There's die-hard wrestling fans, we've been with the sport forever and we love it, but you don't find many places like Iowa where wrestling is a real big thing throughout the community. That was a really big part in my decision -- the atmosphere. If you're a wrestler, it's great out there."

A day later, Baldosaro was joined by Josh Dziewa, a Junior National Champion at 135 lbs. from Pennsylvania and the #33 recruit in the nation per InterMat; while he won his title at 135 lbs., he projects at 141 lbs. in college.  What impressed him most about Iowa?  The crazy intensity of course:

Rank and file.  InterMat has also released their preseason rankings for each individual weight class, as well as team rankings.  Not surprisingly, Iowa is featured quite prominently.  WOO GO HAWKS IOWA RULES YOU DROOL.  Ahem.

And, finally, a programming note.  While we remain fully in the throes of football mania, wrestling coverage will also be ramping up around here.  BHGP's weight-by-weight breakdown of the '09-'10 Iowa wrestling team, also entitled A Winner is You!, will begin next week to help count down until the beginning of wrestling season (11/20, the Iowa Duals).  AWIY! will use a format similar to the Assume the Position series utilized for football: a detailed look at the main contenders at each weight class, counting down from the weight class we're most sure about to the weight class we know the least about.  You can probably guess the first weight class in the series.