It's Not Plagiarism If You Link To It Goes Black & White

Share All sharing options for: It's Not Plagiarism If You Link To It Goes Black & White 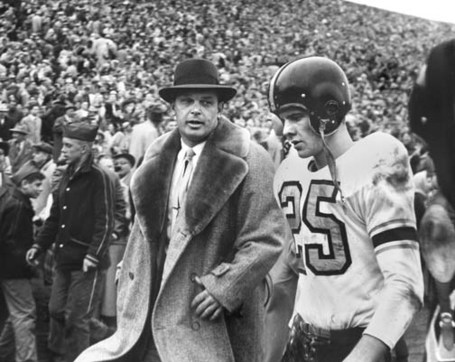 "Does Evy have to choke a bitch?"

To Forest.  Forest Evashevski, 91, arguably the greatest coach in the history of Iowa football, has liver cancer and is in failing health.  He is rarely mentioned, and it is a shame: The guy's biography reads like a Dos Equis ad.  Evashevski, a former Michigan quarterback, once lit a victory cigar with 30 seconds left in a game against Ohio State while he was playing, and ordered his college coach, Fritz Crisler, to run a lap for arriving at practice late.  Before becoming a coach, he taught -- I kid you not -- hand-to-hand combat to WWII-bound Navy pilots. He briefly made his way to the west coast, but left Washington State in 1952 to return to the Big Ten and coach the Hawkeyes.  He ran up a 52-27-4 record in 9 seasons before becoming athletic director in 1960.  He coached Iowa to a 14-14 tie in the infamous 1953 game with the "Fainting Irish" of Notre Dame.  He went 24-3-2 from 1956-58, winning two Rose Bowls in the process (Iowa hasn't won one since).  His final team took a portion of the national championship.   Iowa went through five coaches in the two decades after his retirement from coaching, never finishing with a winning record (due in no small part to his mismanagement of the Black Boycott, but we'll save that for later).  He is a legend, and he is criminally neglected, and he is now 91, and Iowa City and the Big Ten and the world will be a lesser place without him. 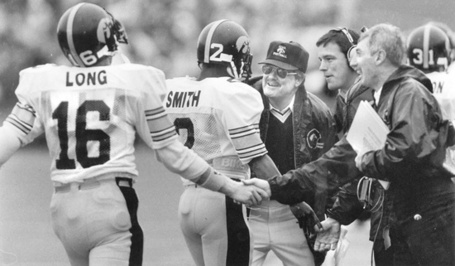 Take a Trip Down Memory Lane.  The Lansing State Journal -- the rare Gannett-owned newspaper written in complete sentences -- examines the Iowa-Michigan State series, particularly the extraordinary series of instant classics in the mid-80's.  As the LSJ points out, every game played between the two teams from 1982 to 1990 was decided by less than a touchdown.  The series is made even more interesting by the fact that Kirk Ferentz was the Iowa offensive line coach, current Iowa defensive coordinator Norm Parker was coaching the Sparty linebackers at that time, and now-Iowa secondary coach Phil Parker played safety for MSU through the mid-80's.  In fact, Phil Parker called Chuck Long's bootleg in the 1985 game:

Michigan State called a timeout with 37 seconds left and installed its goal-line defense. All-Big Ten senior safety Phil Parker was removed for a lineman, and he came off the field and immediately said to his coaches: "It's gonna be a bootleg."

MSU head coach George Perles, defensive coordinator Nick Saban and linebackers coach Norm Parker warned their players of a "bootleg," a quarterback run after a fake handoff. The Spartans bit, anyway. Iowa quarterback Chuck Long faked to fullback Ronnie Harmon, sprinted to the outside and trotted into the end zone.

"I saw Chuck at a golf outing this summer and I told him that's the lowest thing that's ever happened in my life as a coach - to get beat by Chuck Long on a bootleg," said Norm Parker, who is now Iowa's defensive coordinator. "Chuck Long couldn't beat Jud Heathcote in a foot race, but he beat us on a bootleg."

Joe Rexrode goes on to detail the end of the 1984 game, where Iowa was stopped on the goalline on a fumbled option (Ferentz believes the Hawkeyes actually scored before the fumble), and the 1986 game, which concluded on a late MSU interception.  It's a great read, especially given the ties between the two programs on the Iowa staff.

Send Out the Band.  While some local sportswriters produce nothing but pointless drivel and baseless attacks, others prefer detailed, behind-the-scenes reporting.  For instance, Morehouse astutely observed that Iowa has been behind at the half three times this year, outscored those opponents 47-6 in the second half in winning all three games, and asked how Iowa makes its adjustments.  What followed was a coaching clinic:  No rah rah speeches, no cliches, just information gathering and instruction, from the head coach to the waterboy.  Without access to other locker rooms, I can't tell you if this is different from other programs; I'm inclined to say that it's not.  However, at this point, nobody does it better.  Much like everything else with this team, it's all in the execution.