Damn You All To Hell, Minnesota Timberwolves

Share All sharing options for: Damn You All To Hell, Minnesota Timberwolves

Brace yourselves, readers; we have horrible news from the world of professional bas-ket-ball: 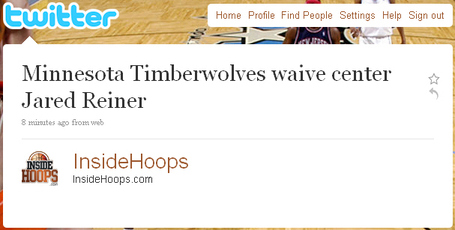 YOU. BASTARDS. We'd be mad if we weren't so... sad. Click here for appropriate music in a new window, then keep reading.

Okay, real talk: Jared Reiner was probably the first athlete we ever met on the Iowa campus, and definitely the nicest athlete we ever met on the Iowa campus. It sucks that A: he got screwed out of a McDonald's All-American roster spot in high school so they could make room for some 7'6" kid who fucking sucked at basketball (just looked it up--Neil Fingleton, who now goes as "the world's tallest actor." Whatever, fuckface.). Then it sucks that his coach was Steve Alford, who rode Reiner's ass for no good reason and left him under the tutelage of Brian Jones, a purely awful position coach.

He was still a cool guy all the same, and one night an old, dear, drunk friend of mine approached Reiner and told him that his new nickname was "The Bighorn Chief," which still wouldn't make sense if we told the three-paragraph backstory. Then, said friend told every other basketball player nearby that Reiner's new name was "Bighorn Chief," and that was all they could call him. I don't know if it stuck--probably not, and that's probably for the best--but... well, that's not a gesture that old friend would have made for Glen Worley or Luke Recker, you know. Reiner's a good dude.

The particularly prickish aspect of this all is that Reiner was just two days away from playing an exhibition with the T-Wolves in Sioux Falls, home of his successful NBDL career and a hour's drive away from his hometown of Mitchell. Really, Minnesota? You couldn't work in a couple more days for the Bighorn Chief? You're all bastard people, Timberwolves! That's what you are! You're just bastard people! And I'm going home and I'm gonna... I'm gonna bite my pillow, is what I'm gonna do! Wait, I am home. Whoops.