Sure, Iowa just choked the life out of the Badgers, 20-10. But how much do we really know? What was really important about beating Wisconsin? What does it all mean, Basil? The Takeaway has the answer.

"Thank you for getting with the program."

This week's theme: Frailty. No, we're not talking about the Bill Paxton thriller, we mean the actual condition of frailty and how it relates to last week's win for the Hawkeyes.

1) The frailty of 7-0: Iowa is now 7-0 for the first time in almost a quarter-century, and on the precipice of the most successful start to a season ever in school history (the undefeated, untied seasons of 1921 and 1922 were seven-season games, so... suck on that, Duke Slater). We are, quite literally, one game away from Iowa history.

And yet, it's come with three wins in which Iowa trailed in the second half, another where Iowa won by three points, and another still where Iowa won by just two. Their average margin of victory is calculated in microns. It's a strange and unexpected development for a team about whom, just eleven months ago, we wrote this:

The difference between 2001 and 2008 is salary. Just like 2001, this is the first time in a few years that Iowa has enjoyed a distinct physical advantage with their opponents, but they're coming up just short. In 2001, 7-5 was awesome. It was positive. It was "we're not getting beating by Western Michigan this year!"

The problem, of course, is that Kirk Ferentz isn't paid for growing pains anymore. And when you get a situation like this where Iowa hasn't won their last 8 games decided by three points or fewer, that starts to become an indictment of the head coach.

Going back as long as the seniors have been suiting up, the Iowa program has real, fatal trouble in close games. Coming into a game against a PSU team that's superior in both discipline and physical talent, that spells automatic loss this weekend. Don't let the 7.5-point line fool you--while Iowa's certainly capable of making the game competitive for all four quarters, there is very, very little to suggest they can come away from the game with an upset win.

Well then, times have certainly changed, haven't they? Even with a patchwork-at-times offense and a schizophrenic quarterback, Iowa has now won four straight games decided by three points or fewer. That those four games have come in a ten-game stretch is somewhat troubling, but as 2002 Ohio State proved, wins are wins.

We're also struck by the 2001/2008 corollary, which is proving itself true beyond our wildest imagination thus far in terms of W/L improvement. The specifics aren't quite there, as anybody who watched 2002 Iowa football can tell you, but it seems evident that the "2008 as a nostrum for the horror of 2005-2007" fits in nicely with where the 2001 season belong in the arc of Hawkeye history. 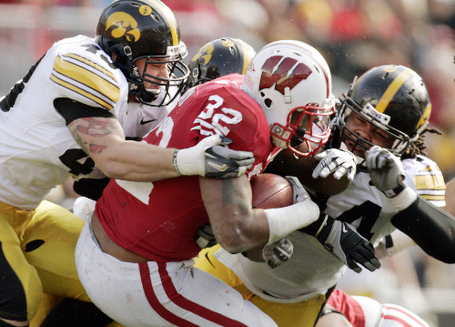 As allegories for the Wisconsin offense go, this was pretty bad.

2) The frailty of John Clay's lower body. First of all, thank God John Clay's okay, because we've never seen anyone get bent like that, then get up and continue playing football. We could have easily imagined a season-ending injury to any of four places--back, hip, knee, ankle--and not have been surprised. But lo and behold, Clay got up and kept getting at it. We're really going out on a limb here, but we say that's a good thing.

That all said, that man should not have played football for the rest of the day, because here's a breakdown of Clay's production before and after the injury:

With Zach Brown nursing a concussion (and we hope he gets at least two more weeks of rest; the absence of symptoms DOES NOT EQUAL full recovery), Wisconsin had to choose between Clay and true freshman Montee Ball, who had rang up 5 carries for 21 yards and a 10-yard score on Iowa's defense. Incredibly (but only if you don't know who we're talking about), Bret Bielema chose Clay for the entire second half; Ball may as well have beaten the traffic home after halftime. Bielema must be proud of himself. 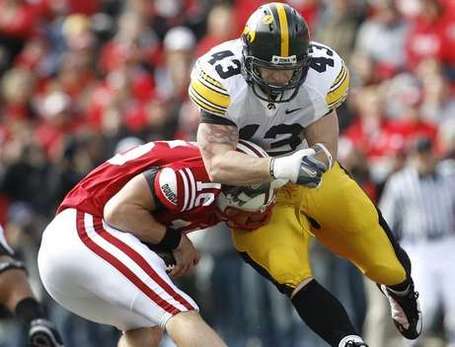 We may want to check Mr. Tolzien for a concussion as well. No, seriously, this looks really bad, like a Mortal Kombat finishing move.

3) The frailty of Scott Tolzein: Bucky's Fifth Quarter chalks the implosion of Wisconsin's offense up to Bielema's--ahem--debatable decision to insert Curt Phillips in at quarterback with the Badgers holding a 10-3 lead:

Holding a 10-3 lead (and the momentum) in the second quarter, UW took over at their own 26-yard line having just completed a 92-yard touchdown drive in which Scott Tolzien coverted 5-of-6 passing attempts for 67 yards. It appeared as if Tolzien had successfully rebounded from a shaky start at Ohio State last week, but in a shocking move, back-up quarterback Curt Phillips replaced Tolzien at quarterback and the UW offense went three-and-out for the first time all day.

Tolzien played from that point on, but the only time Wisconsin even got a whiff of the redzone was when the defense forced a turnover at the Iowa 25-yard line. Wisconsin didn't score a point there either.

If one series of giving a backup some snaps (a stupid decision, even as Wisconsin came within a yard of converting a first down) is all it takes to shake Tolzien's poise, that's not a good sign. Nonetheless, here comes another split:

That, sir, is a certified BITCHMAKING, and those gentlemen with puffy eyes are Austen Arnaud, Matt Scott, Daryll Clark, and Tate Forcier. They'd like to share their stories about how Iowa's defense ruined their day with you too.

4) The frailty at tight end: Tony Moeaki would be the most injury-fucked Iowa player in Ferentz's Iowa career--by a wide margin, even--if it weren't for fellow Wheaton-Warrenville alumnus Dace Richardson, both of whom are experiencing a wholly unlikely resurgence in this, their senior season. Moeaki is back and delivering the ass-kicking everybody expected for the last four years or so, recording his third touchdown in two weeks with a scintillating 24-yard reception (you can pretty much end the video after that, as the highlights are marred by excessive fan-woofing). 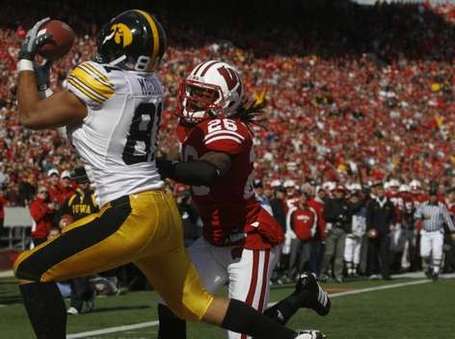 Meanwhile, Wisconsin was further hampered after their own weapon at TE, Garrett Graham, suffered his own game-ending injury with a concussion (again, one that we hope Bielema or any other college coach would treat with a month off). In that second half, the Badgers really had no chance, even as they led coming out of the break with the ball. Missing their best tailback and super-talented tight end? Who can bounce back from that? OH HO HO, WAIT A SECOND...

5) The mental frailty missing from the Iowa Hawkeyes, from the top down: For as much as Wisconsin's success depended on the health of Clay and consistency from Tolzien or smart calls from Bielema, Iowa never wavered, never panicked, never abandoned the aspects of their gameplan--well, unless we're talking about going for it on the 31-yard line. Let's keep going to Daniel Murray on that one, shall we? 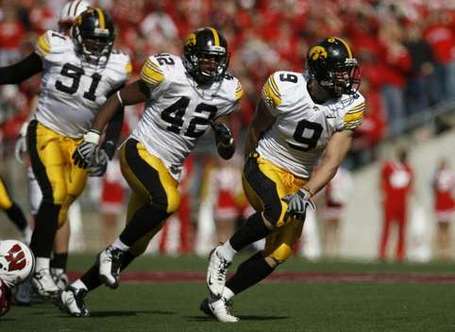 The first and only picture we've ever saved as "awesome.jpg."

As has been pointed out by multiple members of our community, Iowa has an unshaking resiliency that has carried them this far through the season, whether it be from Ferentz not panicking in his gameplan (even ARRGH ARRGH ARRGH running Wegher on first down when we all know it means 2nd and 12), Ricky Stanzi not letting his STANZIBALLs get to him, or the defensive front seven not giving up after 20 minutes of pure Wisconsin beatdown in the rushing game (and let's be honest, that's what it was). But Iowa brings it for 60 minutes, six seconds of hell at a time, and nobody this season has stood up to the Hawkeyes and dished it back in greater amounts...yet.

There are five games between here and 12-0. The second-toughest remaining game looms this week.  If Iowa wins, you absolutely must be on board with where this season's headed.

It's a strange situation, one in which a decidedly strong team have worked their way into a national championship scene that isn't ready for them (and probably vice versa) this season. Is Iowa's hold on the Top 10 frail? Perhaps, but not relative to the rest of the Big Ten. 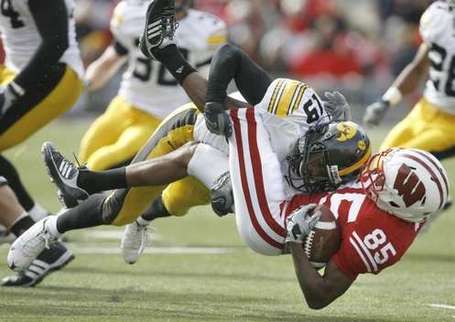