FTW! is the BHGP weekly guide to Big Ten watching and wagering. 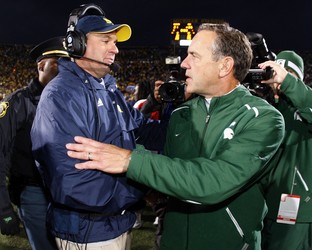 Why Watch?  It's arguably the most compelling conference game of the week.  Just look at the subplots: Rich Rodriguez, off the worst season in the history of the program in which he handed Little Brother its first win since 2001 (and first in Ann Arbor since 1990), tries to restore the order.  Mark Dantonio continues his obsession with beating Big Blue.  Michigan attempting to prove it belongs with the other undefeateds.  Michigan State attempting to pull out of the John L. Smith-era tailspin that we all thought was past it.  Tate Forcier and his non-injured injured shoulder.  The MSU quarterback shuffle.  It's got it all.

Why Pass?  It's on while Iowa is playing Arkansas State, so you might need to miss the first part.  Also, it's inexplicably relegated to the BTN with Wayne Larrivee and the guy from Coldplay.  Certainly enough to hit the mute button, but not nearly enough to miss the game completely.

Who Ya Got?  MSU -3.5, O/U 54.  There is oh so much value here in Michigan, especially now that a field goal isn't a push.  There has been inexplicable huge movement toward Michigan State, which normally calls for the Contrarian view, but this hasn't been a year for the Contrarian view.  I think the movement is for the Forcier injury, even though he isn't even listed as questionable in the injury report.  Take Michigan and the points, and expect the best.  As for the over/under, I'm still staying with UM over until proven otherwise, but watch the weather here; forecast is for rain throughout the day, which would help Michigan but likely harm the over.

Why Watch?  Aside from maybe Michigan, no undefeated team has more question marks than Wisconsin.  They have looked mediocre (Fresno State).  They have looked spectacular (Michigan State).  They finally have a legitimate quarterback, and their offense looks a little scary.  The defense, on the other hand, is either opportunistic or just bad.  Minnesota is still waiting for confirmation of their mediocrity; three close wins over middling opposition (don't bring me the Northwestern game as some sort of convincing victory; Minnesota was down after 3 quarters), and a loss to the now-mortal Cal Golden Bears.  We're still learning about both of these teams.  Oh, and they're playing a rivalry game for an ax in that new stadium.

Why Pass?  Again, it's on during the Iowa game.  But this one will be worth keeping an eye on, Jedi.

Who Ya Got?  Minnesota -2.5, O/U 52.5.  The underdogs this weekend make no sense to me.  As crazy as that Michigan line seems, it pales in comparison to this.  Minnesota has no discernible home field advantage, an inferior offense (Eric Decker excepted), and an average-at-best defense.  Take Wisky and the points.  The over is appetizing here, as well.

Why Watch?  No real reason, unless you're into masochism.  Both these teams stink and are going nowhere.  Northwestern is collapsing before our very eyes, after following the Syracuse collapse with a fourth-quarter meltdown against Minnesota.  Purdue has done the same, but against better opposition.  Someone has to lose, I guess.

Why Pass?  It's the fourth-best show on at this time, and the second-team Big Ten Network crew, featurning someone named Ari Wolfe, is on the call.  So stay away unless, again, masochism.

Who Ya Got?  Purdue -8, O/U 56.5.  I've begrudgingly taken Northwestern, if only because Purdue shouldn't be favored by more than a touchdown against anyone.  But the more I think about it, the less I like this wager.  The weather might make the under a great bet, especially with Mike Kafka behind center.

Why Watch?  Penn State is out for blood.  Again.  Which means Darryl Clark will probably go 6-45 for 84 yards, throw three interceptions, and then text message the other sideline for some support.  He will get no response, because Juice Williams will be too busy finding a way to put up an even more pathetic performance.  If you can find a prop bet on turnovers, take the over.  Take it to the bank.

Why Pass?  There's a little thing called LSU-Georgia on CBS, which will likely be equally bad quarterback play in better weather.  Washington-Notre Dame is on, as well, with two quarterbacks who are far better.

Who Ya Got?  PSU -7, O/U 47.  Illinois has been crushed by every legitimate team it has faced.  This should be no different.  Give the points and take the road favorite, if you must (though, to be fair, I'm not nearly as high on this pick as everyone else here).

Why Watch?  Indiana looks a little frisky.  The EKU opener aside, IU has performed admirably in wins against Western Michigan and Akron and a near-miss at Michigan.

Why Pass?  Jim Tressel hates frisky.  Jim Tressel strangles the life out of friskiness while it sits in the cradle.  This is going to be an excruciating piece of football, and Oklahoma is playing Miami on network television at the same time.