Share All sharing options for: It's Not Plagiarism If You Link To It Knocks Down the Open Three 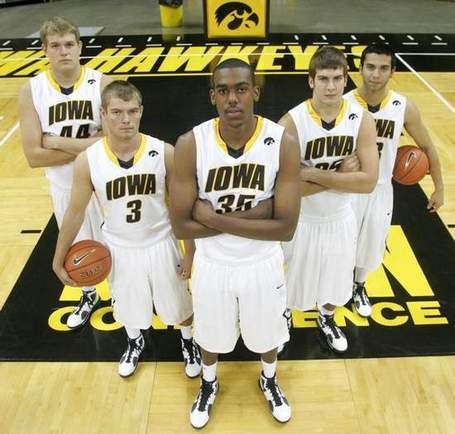 (NOTE: Due to technical difficulties with the recording software, the BHGPodcast is cancelled for this week.  We'll return next week.)

We Were Merely Freshmen.  With the footballing and the winning and the defending and the Stanziing, we almost missed basketball media day earlier this week.  A quick roundup:

He May Be a Gunslinger Named Tate, but He's Our Gunslinger Named Tate.  Bleacher Report got an interview with former Iowa quarterback Drew Tate, who is now a backup with the Calgary Stampeders of the CFL (in classic Bleacher Report fashion, they say he's playing for the Calgary Stampers, which is actually a scrapbooking club).  After the obligatory "Canada is good, metric system is weird, we have 12 players and 3 downs and it's all very strange" questions, Drew talked about this year's incarnation of the Hawkeyes:

Stanzi is doing great. He wins games and everyone seems to overlook that now a days. You play to WIN and it doesn't matter how that's accomplished. The defense has been the most impressive thing to me. I have only seen the Penn St. game and they played phenomenal.

The offense played great when they had to and the defense was able to keep them in the game the whole time. That was a great team win and a huge boost of confidence for not just the team but the coaches and everyone involved in that building.

The most interesting part of the interview has to be Tate's favorite moment as a Hawkeye.  You would think it was this, of course, but he says it actually was beating Wisconsin to win a share of the Big Ten championship one game earlier.  His least favorite moment, of course, would be when Andy Brodell dropped his seventh consecutive pass against Indiana in 2006, causing Tate's head to explode like that guy in Scanners.

Caring is NOT SO FAST MY FRIEND.  Remember the hullabaloo last week over the on-again-off-again recruitment of Illinois tight end C.J. Fiedorowicz?  The Illinois commit planned on visiting Iowa last weekend, but cancelled his visit at the eleventh hour under pressure from The Zooker.

Looks like [NAME REDACTED] isn't as persuasive as we thought.  During a press conference where he was named a U.S. Army All-American Tuesday, The Polish Hat came THISCLOSE to decommiting:

Fiedorowicz, who earlier this summer gave the University of Illinois his verbal commitment talked about his latest recruiting news. "I'm still with Illinois, but they are playing a little rough right now," he said. "I'm planning to keep my options open right now with Illinois and Iowa. I went to Illinois this past weekend for an unofficial visit. I'm planning to take my official visit to Illinois on Dec. 12.

Those are not the words of a solid verbal, folks, and there is no mention of another school in contention for his services.  Funny how things like "losing by 30" and "not actually using a tight end" can hurt your recruitment of a tight end.  Save a scholarship.