In Retrospect, Nobody Could Have Seen This Coming

Share All sharing options for: In Retrospect, Nobody Could Have Seen This Coming

Pop quiz, sex beasts: guess what school's fan wrote this to the local paper. Here's a hint: it starts with "M" and ends in "innesota":

While it is apparent that catering to the wealthy up in their enclosed, heated suites is valued by the university's administration, ignoring the necessities of a majority of the fan base seated in their exposed seating is unwise and shortsighted.

Below 40 degrees, the stadium is a cold place( brrrr!). There are no places to warm up, other than bathroom areas where traffic needs to flow, not be clogged with fans trying to find some heat. Space heaters strategically placed throughout the concourse would accommodate most fans, especially the young children who will one day be bringing their kids to games at the stadium. 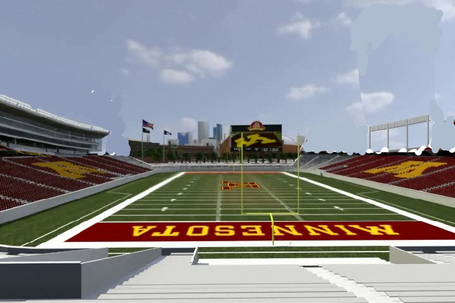 As if it could be anywhere else.

Yes, apparently one outraged reader decided to tell the Minneapolis Star-Tribune all about how the common fan was being shit on, what with the new stadium being exposed to the elements. Seriously, though, who would have thought that an outdoor stadium in one of the most arctic BCS campuses would be a bad idea? Maybe they need a dome. How come nobody thought of a dome?

For real. Give them heat and give them mini-donuts. And maybe a roof over their poor heads.