Sure, Iowa just won a slugfest with Michigan, 30-28. But how much do we really know? What was really important about beating Michigan? What does it all mean, Basil? The Takeaway has the answer.

Hey Ricky: Cut that out. Iowa did win, of course, and sandwiched between MIchigan's two scores was a 30-14 drubbing that could have been worse. But holy smokes, is Ricky Stanzi ever trying to raise peoples' blood pressure. For the second straight week, Stanzi threw what we considered his worst, most definitive, Stanziest of the STANZIBALLs, this one a game-opener to Donovan Warren who, with a different set of rules, could have crawled into the end zone unmolested.

It's absolutely worth pointing out, of course, that from that point on, Stanzi put together a solid performance while Tate Forcier was effectively bitchmade by the Iowa defense - making the Hawkeyes 3-3 on bitchmaking whenever Shaun Prater's in the lineup. No coincidence, that. 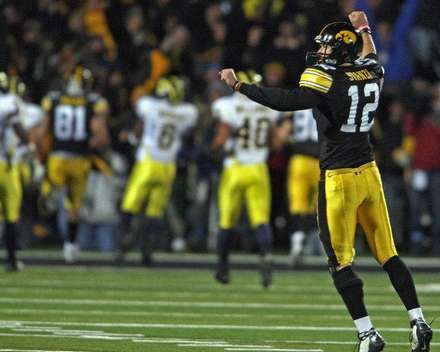 That all said, Stanzi's antics have now directly cost the Hawkeyes a touchdown in three of the last four games, a Jarrett Lee-like display that ended a whole lot worse for LSU last season than it has for Iowa thus far. In those three games, each of whom was an unranked opponent now and at kickoff, the average margin of victory has been five points. Obviously, you can't take points off the board in the middle of the game and expect the rest of it to play out exactly the same, but if Iowa wins all three of  those games by an average of 12 points instead, we've got a much better comfort level and maaaaybe a better ranking thus far. Probably a moot point unless Iowa wins in Columbus, but something worth pointing out all the same.

Ta-ta, streak. Whatever. It was pointed out before the game that despite Iowa's impressive streak of 33 quarters without giving up a score, the Hawkeyes' rush defense isn't really that great; they were 50th in the nation coming into the MIchigan game, and the 195 yards they allowed on the ground probably didn't help matters that much. 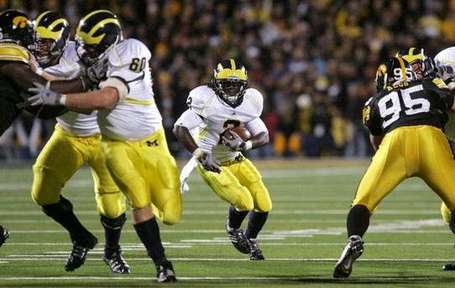 Sure enough, in the first quarter, Brandon Minor punched one home from inside the 5 yard line, and that was that. Michigan scored twice more on the ground, which is overkill guys, because come on, the streak's already done. There's little shame in giving up 195 rushing yards to Michigan, though, considering how helpless Robinson and Forcier were made to look in the aerial attack. 319 yards on 68 plays, after all, isn't that shabby a performance.

Now that the streak is gone, then, we can look at the Iowa rush defense without that veneer of impenetrability that the overall stats belay even while the streak was alive. The Hawkeyes still struggle against mobile quarterbacks, which is probably in some part due to the linebackers' responsibilities far away from the line of scrimmage and in some part to more easily favorable matchups when a rush play isn't automatically 9 players blocking 11. This is an enviable situation, mind you, but Iowa hasn't had that kind of personnel since Brad Banks. Oh well. 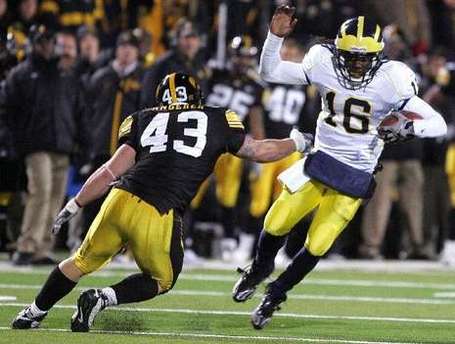 Also, the linebackers' lateral quickness leaves a little bit to be desired.

Speaking of the rush, hello half of the state of Michigan: if Michigan's game plan was explicitly "Make Stanzi beat us," they went about it the correct way. Adam Robinson and Brandon Wegher were effectively minimized as threats, combining for 91 yards on 23 carries. Worse, the two garnered only three first downs on the ground (all Robinson in the third quarter), with Stanzi registering three of his own. That's not exactly the type of production that usually leads to Iowa scoring 30 points.

Fortunately, with Michigan putting 11 players, 4 couches, 3 cheerleaders, and Sad Michigan Girl in the box, that left the secondary very susceptible to big plays, and Moeaki's delay routes as the receivers ran off coverage led to two easy, easy touchdowns, the second of which accounted for Iowa's last points of the day. This forces us to put 4 1/2 words together that we're not really comfortable saying: I have swine's flu Nice job, Ken O'Keefe. Okay, that's that, let's move on.

Oh, and KOK deserves credit for this one too. Good show, old bean.

Opportunities lost? Yeah, we've both got them, so shut up: Maize-n-Brew published an abortion of a recap titled "Michigan defeats Michigan, Iowa something something." Actually, we stopped reading at about the third letter in the third word of the title, because holy go fuck yourself are you wrong. For example:

It would appear, then, that Michigan did not take points off their board and that they were fortunate to be within two points by the end of the game. In fact, at no point in the second half did Michigan have the ball on Iowa's side of the field with a one-possession deficit. They were never in position to win, and they lost by a deceptively close score. To insinuate otherwise is a fool's occupation.