"DJK is loose in the Minnesota secondary!"

Share All sharing options for: "DJK is loose in the Minnesota secondary!"

So I was at the Sports Column (Sunshine State version) for Iowa's bowl game extravaganza and I saw something that I thought I should share.  Sometime just after the game I stepped outside amongst the smokers to make a phone call.  There was a guy with a football and he was inconspicuously tossing it up and down while burning a smoke.  About that time another fellow comes cruising out of the bar wearing a Mitch King jersey and sees the guy with the football.  He gives him a drunken stare for a few seconds and says, "Dude.  Hit me. I'm going long," and runs out onto the street, which they had (luckily) closed down for the morning.  The guy took off and was definitely running a straight fly pattern.  The guy with the football let him get deep. Real deep.  From where I stood outside of the bar I heard the streaking guy in the distance shout, "DJK is loose in the Minnesota secondary!"

The receiver-guy was probably a half a city block away at this point when the guy with the football goes all Testeverde on him and lets loose a tighly-spiraled high-arcing 45-yarder.  It was honestly an amazing pass for some random dude outside a bar with a Parliament dangling out of his mouth.  So pseudo-DJK is rumbling down the street at full tilt and starts doing the Deion Sanders highstep as the ball plummets down toward him.  As the ball arrived, he must have been going over a carefully choreographed touchdown dance in his head........because the football smashed him square in the fucking face.  I believe it got him in the nose, to be exact, because that's where most of the blood was pouring from as the dipshit stumbled around between parked cars.

The reaction among the approximately 15-20 witnesses was mixed: 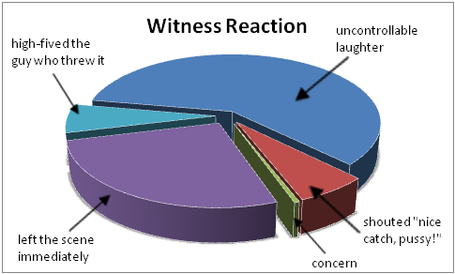 By the time the guy finally staggered back to where we were standing, he looked like he had told Brock Lesnar that he fucked his mom.  He had blood on his mouth, chin, neck, hands.....pretty much everywhere.

I'm going to keep an eye out on youtube.....hopefully some brilliant bastard got it on video.