So, About Those Empty Seats...

Share All sharing options for: So, About Those Empty Seats... 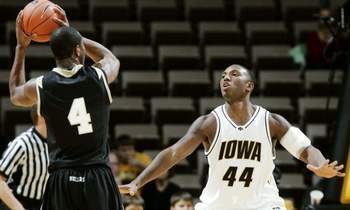 There is just over a month left in basketball season, and attendance is down. Way down. As in, worst season in history down. Nine years ago, Iowa basketball averaged 15,156 per game; this year, Iowa has averaged 9,527. The Hawks sold out every game in 2000-2001; they have yet to sell out a single contest this year. How is it possible that attendance at Iowa basketball games dropped more than 30% in a decade?

The Schedule - Face it, the schedule has sucked this year. Sure, Iowa State and UNI played at Carver-Hawkeye, but the only fanbase more apathetic than Iowa's might well be ISU. And if the teams on the schedule have been bad, the timing of the games has been even worse. Iowa has played two Saturday games (which generally draw well) and two Friday night games (which absolutely do not). The Hawks have yet to face a marquee opponent at home (the best has been Minnesota) and has played its best opponents at horrendous times (Minnesota was a 6:00 Thursday start; Iowa State was a Friday night)

With that said, it's not as if the Hawkeye non-conference slate was ever a murderer's row. In fact, the long-overdue demise of the Hawkeye Challenge has taken two sparsely-attended games against cupcakes off the schedule. The game times certainly have something to do with the decrease, though.

The Atmosphere - For ten years, the Carver-Hawkeye atmosphere has been bad and getting worse. A significant source of this problem: The student section, which is half-full most nights. Unlike Michigan, MSU, and Illinois - where students get prime seats next to the floor - Iowa students are relegated to end zone seats nobody else wants. Asking college kids to pay good money for a season ticket in a bad seat is terrible enough; asking them to attend Sunday morning games at a stadium completely inaccessible by any transportation method other than bus is a travesty. You lose the students - and when you are giving away an additional ticket to each student season ticket holder for a conference game, you have - and you lose the atmosphere.

In his recent impromptu press conference, Bloodpunch said the season ticket base has been "eroding" for years. It was just a polite way of saying what nobody wants to say: Iowa basketball season ticket holders are dying. Literally. Fans with prime seats have held them for years, and it shows. Even on nights when Iowa draws a decent crowd, the fans sit silent and rise to their collective feet only at the promise of a free t-shirt.

If Barta truly wants a fix, he'd send the geriatrics up 15 rows and put the students courtside. That way, the students can improve the in-game atmosphere, and the elderly don't have to negotiate as many stairs.

The Economy - Should not be discounted this year. While fans from across the state can travel to a Saturday football game, the potential fanbase for a Thursday night basketball contest is far more local. Iowa's been forced to sell an overpriced ticket package to people recovering from a 500-year flood and layoffs across the region. Big Tom Callahan could sell a ketchup popsicle to a woman in white gloves, but even he couldn't make this pitch.

While the economy is surely playing its part this year, attendance was decreasing long before Bear Stearns melted down. It might be the worst year for attendance in the program's history, but it wouldn't be much better if the value of your house wasn't collapsing.

BTN - Rarely discussed, but a far bigger culprit in this than anyone seems to realize. The Big Ten Network hasn't been particularly detrimental to football, where ABC/ESPN still picks up 3-5 conference games each Saturday and the BTN simply airs the games nobody else wants. Basketball has been an entirely different story. Iowa basketball is infinitely more difficult to watch with the BTN than it was without for a number of reasons:

The Style of Play - We might as well say it: This is ugly basketball, and it has been for two years. Iowa doesn't score boatloads of points. Neither do its opponents. Total combined scores under 100 points are far from unheard of. And, as ugly as Iowa basketball might be in normal circumstances, it turns absolutely fugly when other slogging teams like Wisconsin come to town. Iowans will watch pretty basketball. Iowans will watch winning basketball. Iowans won't easily watch basketball that is neither.

The Lack of Success - It's not unusual that a dip in the win column coincides with a drop in attendance, and Iowa is coming off the worst season in team history. There is no doubt last season's complete abject ineptitude plays into this season's attendance problems. There is also no doubt, though, that it's hardly the sole reason for it. After all, the 1999-2000 season, Steve Alford's worst at Iowa, drew near-sellouts night after night. Speak of the devil...

Steve Alford Hangover Effect - You want a trend? I'll give you a trend:

The decrease in attendance hasn't been linear; rather, fans are leaving in 1-2k chunks following particular events. Those events look to be the Pierre Pierce debacle in 2002-03, the three-year tournament drought, and the sub-.500 first season under Lickliter. Pierce will always be Alford's legacy, and the fan apathy generated by the early-00's incarnation of Iowa hoops certainly didn't help matters.

Don't discount the Alford effect. The man singlehandedly drove a once-basketball-crazed fanbase away with staggering efficiency. He battered us all, in ways we couldn't even understand. The promising beginning, the inexplicable victory over a top-caliber opponent, the inevitable collapse. It was Machiavellian. On his way out the door, Alford complained that Iowa was a "football school." It might have been when you left, Steve, but it wasn't when you got here. Mission accomplished.