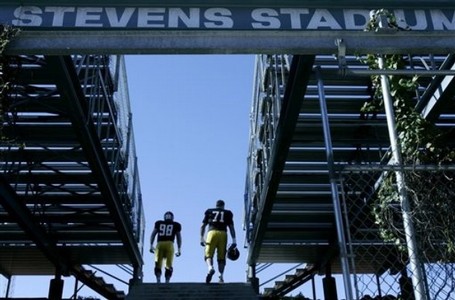 (on the left, if you were wondering.)

Should we talk about something other than Ed Podolak? Yes? Okay, then let's go with another early departure from the football program. Hey, sorry, news is news.

Today, our subject is Tyler Blum, Army All-American turned career special teams contributor. Looking at his fifth year at Iowa and a glut of underclassmen at front of him at any position he might think about playing, Blum has left the team and will apparently focus on baseball for his redshirt senior season.

Encouraged by the response from a little inquisition, Blum, a former All-State pitcher for Walnut who was in fact left-handed and a fire baller, wants to see if it’s not too late to try Plan B.

"I made some calls to know if this would be worth my time to try or am I too old…have I missed my window of opportunity?"  Blum wondered. "(One DI baseball coach) told me, you’re 6-foot-6, 250 pounds and you’re left-handed. You’re not going to be wasting your time. I’ll try it and hope it works out, I don’t want to have to get a real job."

No, Tyler, you do not want a real job.

As departures from football programs go, this is about as well as Blum could have handled it. Chasing the glory of one year in a starting role to the depths of I-AA doesn't make much sense in the long run; unless the move is made to a better school academically, why not stay around and earn your degree? Even a B.A. from, say, Iowa, is going to make the rest of a young man's life a whole lot better than one year of football at the I-AA level, then 4 decades of a professional career based on a degree from, oh let's say, Illinois State.

Now, granted, it's almost a moot point, since Blum's completing his degree in four months, but unless he's got some specific academic or athletic pursuit that's better served at a more specialized/prestigious smaller school (NOTE: this never happens), Blum's smart to stay right where he is right now.

And then there's the baseball point, where Blum was an all-state pitcher at "Walnut," which is apparently a real town and high school. He's got to adjust his frame--get rid of the football bulk, lengthen his musculature to get it ready for pitching instead of exploding at the line of scrimmage--but Chris Doyle could probably help with that, don't you think?

He's got two factors working against him, though. The first is his age--Blum is an inexperienced 22 already, so that may turn off some GMs. Further, we don't know how hard he can throw anymore. It's cool to be a 6'6" mountain of a man on the mound, but if that 6'6", 250 guy is throwing 91 instead of, say, 97, then a whole lot of the intimidation goes away.

But we're delving into the details and speculation at that point. Godspeed, Tyler, and we're glad that if you must leave early, you're leaving proud, healthy, and academically sound.