Is Iowa Better Than Florida? Yes.

Share All sharing options for: Is Iowa Better Than Florida? Yes.

Hey, who wants to talk about basketball? Us neither! So imagine our relief when we saw that Orson was opening back up the Fulmer Cup for this interminable off-season. But then he drops this shitbomb on us unsuspecting readers:

Iowa, a program undoubtedly the most lawless over the brief span of the Fulmer Cup’s existence, has never won the Cup despite having people arrested constantly for little two and three point crimes.

Oh please. Like Iowa has anyone on their roster who has an assault weapons charge. And what a euphemism that is. "Assault weapon." No, fists are assault weapons. AK-47s and other automatic rifles aren't used for assault, they are used for SUPER MURDER. But, as it turns out, the kid's just really good at defensive tackle, so back onto the team you go, la dee da! That is a lawless program, sir.

So that got us to thinking... how else is Iowa better than Florida. The answers were astonishing. So much so that one could reasonably, coherently proclaim that the real national champions were right here in the Corn State, and pretenders wear orange and blue. Let's get right to it.

Counterpoint: Iowa crushed their bowl opponent so badly that they went from unranked (#26, technically) all the way up to #20, a 6-point move. Meanwhile, Florida's blase-at-best win over the ludicrously overrated Big XII South didn't move them an inch in the polls; they were #1 coming into the contest. As a matter of fact, even with a win in what should have been the title game, many voters were still compelled to vote for someone else. Ergo, Iowa performed better than Florida in the bowl, and it is only reasonable to infer that they would continue to do so over the course of a year--or head-to-head.

Point: But Florida beat Oklahoma, the #2 team in the nation.

Counterpoint: This makes Oklahoma's fifth straight BCS loss. What does Bob Stoops do, gentlemen? Bob Stoops loses BCS games. So what makes you think that'd be any different if Iowa were lining up against the Sooners? It would be no different. I'd say Iowa 38, OU 20. Couple late TDs for the Soo Crew. 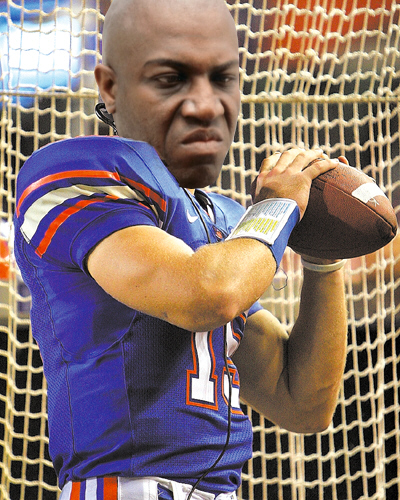 And, yes, of course Deebo is coming back for one more season. This isn't the way Deebo's story ends. This is:

Are we saying, then, that Dick Stanzi is exactly like Ice Cube? Yes, sure.

Point: Every Day Should Be Saturday.

Conclusion: Florida is ducking Iowa because they know Iowa would throttle them. And Urban Meyer, please get a real fucking name.