Share All sharing options for: Jake Christensen Bids Us Adieu 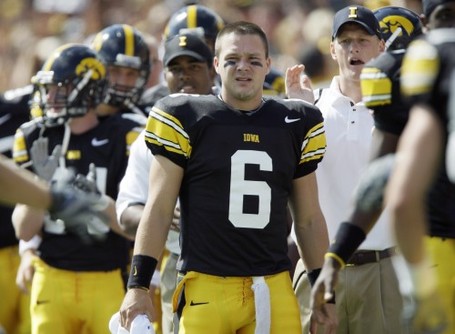 Iowa junior quarterback Jake Christensen has decided to transfer from the school, his father told ESPN.com this afternoon.

Christensen, who started every game in 2007 and two games this season before losing his job to Ricky Stanzi, was granted an unconditional release by head coach Kirk Ferentz. A fourth-year junior who appeared in eight games this season, Christensen is considering transferring to both FBS and FCS programs.

"It's wide open right now," said Christensen's father, Jeff, a former quarterback with the Cincinnati Bengals and Cleveland Browns. "We're just going to go out and talk with everybody and see what's out there.

"Four [schools] have come back and said, 'Absolutely, we want him.'"

Clearly, the writing was on the wall.  Dick Stanzi has established himself as the starting quarterback for the foreseeable future and, with one year of eligibility remaining (remember, he redshirted), Jake had to move if he wanted to play.*

There will be plenty of post-mortems on the Shakespearean tragedy that was Jake Christensen's time at Iowa, but we at BHGP have a bit of melancholy in our darkened editorial hearts this afternoon.  Over the past year and a half, we've had Jake fend off KOK's advances (say hello to the "sexual freddy krueger" tag, Ricky Stanzi!), get really into his NCAA 2008 dynasty, go on Deal or No Deal, and lose his right arm to a bear.   Jake seems like a genuinely good kid, and that made him great material for us.  That, of course, doesn't even scratch the surface; there were the Democratic primary-like series of debates on BHGP and everywhere else about whether he should play, and his teammates' wholehearted defense of him against the naysayers.

From the staff of BHGP, good luck and godspeed, six-shooter.

* -- I'm not entirely certain why he's considering D-I schools, since he's already burned his redshirt year and will be a senior next year.  I'm assuming he's looking for a hardship deferment or something similar, but I'll leave that to people who know the eligibility rules better than I do.