Share All sharing options for: What BHGP Means To... Wolverine Liberation Army

We at BHGP had known of the man known as "Dex" for a few months; he was on our radar as a commenter here and (much more frequently) at mgoblog, and seemed to be a decent fellow. When we found out a couple months ago that he was starting a blog called "Wolverine Liberation Army," we figured it was just some creepy X-Men fanfiction (SPOILER ALERT: Professor X bangs, like, everybody). When he littered it with communist filth and added a coterie of likeminded Stalinists, we were sold. Representing the Great Slumbering Bear of the North, the runaway leader for Best New Blog of 2008 was kind enough to lend us a few words, and we are grateful. Russkie bastards.

So, Wolverine Liberation Army, what does BHGP mean to you?

To us, BHGP means Iowa.

When we think Iowa, we think America. Shitty, pedestrian, middle of the road America. A magical land where innovation involves sticking corn into gas tanks instead of fat kids' mouths. A native President, but it's Herbert Hoover. Hoover and the rest of elite bourgeousie crushed the working class with the great depression - a prescient foreshadowing of BHGP's agenda. The only thing that sucks worse than Hoover's presidency is Kirk Ferentz's record against Iowa State.
So when the Politburo was informed that our enemies in the Tall Corn State were celebrating an anniversary, our first reaction was to make a jerk off motion with our hands and go back to writing Barwis slash fiction.

But after some high level meetings, we decided there are a few redeeming things about BHGP, things worthy of minor celebration.
Hating the Spanish. BHGP regular Joe Paterno has a severe grudge against the Spanish. The fascists in Madrid have never been kind to my people (we come from a long line of Basques who interbred with gypsies) and I suspect the Spanish nurse at the retirement villa is stealing from the war widow I plan to seduce and murder torture brutally beat love for the rest of my life.
Profiting off the sweat of others (the WLA, of course, is blameless of such actions). WLA spies have found a recent picture of Hawkeye State at a local meeting of bourgeois business owners: 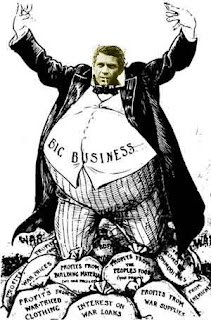 Self-congratulation. At first, when asked to write something celebrating BHGP, we assumed they had died in our Gulags, or that the curse of Hepshepsut has finally caught them. No, they're having an anniversary. For themselves. It's like throwing yourself a surprise birthday party.

So, we suppose, happy birthday BHGP. It must be hard writing comedy about something that's as big a joke as Iowa football.

Thanks, WLA! Though we despise your backwards, totalitarian ways and see capitalism as the one true avenue to statewide prosperity and individual freedoms, we admire your lemming-like enthusiasm. Soon, we're sure, your Slumbering Bear will awake once more. Someday. Hey, why are those vultures eating it?