I'm adding more video from A Mighty Wind, because I think we all need a laugh.

At halftime of this game, I sent this text message to OPS:

Is it too late for me to transfer to Penn State?  I wonder if BSD needs some help.

In response, he called me a bastard, and probably rightfully so.  Still, it must be said: The most innovative and effective offense in the Big Ten was created, and is being operated, by Jay Paterno and Galen Hall.  They're immensely fun to watch.  Their quarterback is effective, both on the run and the pass.  Their line is solid, if unspectacular.  Their skill position players are faster and more athletic than those of any other team in the conference (including Ohio State).  Even when Clark has a less-than-spectacular night, as he did tonight, they move the ball downfield almost at will because the supporting cast is just that good.  Evan Royster is great.  Derrick Williams has finally arrived.  The Spread HD simply gets the ball into the hands of those skill players with space to work and a team of road graders plowing the way.  It is both college offense at its very core and a concept completely foreign to anyone who watched Iowa's offense Saturday.

As for Illinois, Juice Williams could not respond to his defense's inability to slow down Penn State.  His final line (13/24, 183 yards, 2 TD, 1 Int, 64 yds rushing) simply wasn't good enough to hang with the Nittany Lions.  Arrelious Benn (4 catches, 110 yards, 2 TD) continues to terrify me; it's a shame he doesn't have someone under center who can repeatedly get him the ball. 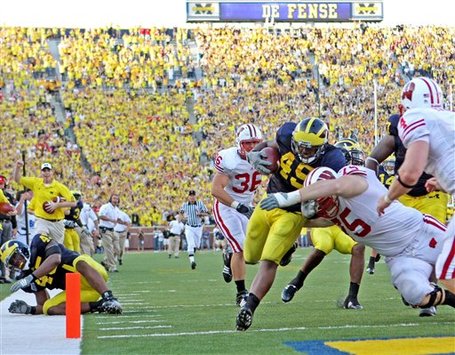 This is the epitome of Dr. Saturday's "Life at the Margins."  Steven Threet completed twelve of thirty-one passes for a whole 96 yards (yeah, that's 3.1 yards per attempt).  Sam McGuffie had 36 yards on 15 attempts (to be fair, Michigan did finish with 172 yards on the ground).  Wisconsin's Allan Evridge had arguably his best game of the season, completing 20 of 37 for 225 yards.  The Badgers won the turnover battle 5-4.  Wisconsin was ahead 19-0 with three minutes left in the third.  This thing should have been a comfortable win for Wisky, if not a blowout.  A bad penalty here, a tipped pass there, and one of the gutsier performaces I've seen in quite some time from Big Blue, and Wisconsin goes home a loser.  I can't even begin to explain the series of breaks that led to a Michigan win; this game was one of the strangest I've ever seen.

With just over 4:00 left in the third, at his own 1 yard line, and down by 5 points, Indiana backup quarterback Ben Chappell dropped back and completed a bomb for a 99-yard touchdown.  Only he didn't.  One of his lineman was called for holding in the end zone, Michigan State recorded the safety, and Indiana went from up two to down seven.

You know what happened next.  I write it every week, and I'm sick of it: Javon Ringer puts Michigan State on his back and carries them across the finish line.  Ringer's line: 44 carries, 198 yards, 1 TD, and two receptions for another 20 yards.  He's averaging over 37 carries and nearly 180 yards per game (including 227 ypg in the last three games).  Not only is he racking up obscene numbers, but he's doing it at the end of games.  MSU entered the fourth quarter up by 7.  They proceeded to hold the ball for over 10 minutes of the final period, as 16 of the 20 plays they ran went through Ringer.  If Michigan State wins 9 games this season, he should win the Heisman.

Michigan State's defense contained Kellen Lewis on the ground, made him beat them through the air, and it largely worked.  Indiana responded by bringing in Chappell and moving Lewis to wideout.  Lewis caught two passes, and Chappell was effective.  In other words, we might want to get ready for some exotics. 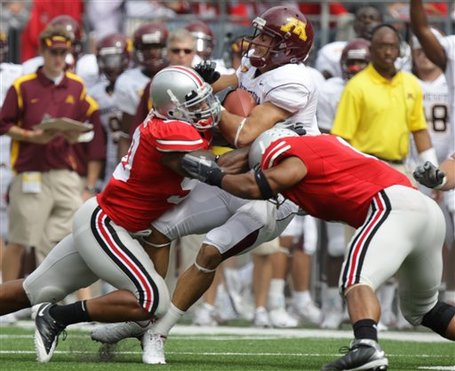 Beanie Wells is back.  Terrelle Pryor is behind center (well, at least most of the time).  Ohio State is going to run the ball.  A lot.  Wells went for 106, Pryor added 97 and a couple of touchdowns, and Ohio State rode four long runs to an easy victory over Minnesota.

The score, and Minnesota's offensive numbers, are deceptive.  It was only in garbage time, when OSU had gone ahead 34-6 early in the fourth quarter.  It's not to say I'm not worried about Minnesota; the offense is visibly improved, the defense is bordering on competent, and the kicking game actually looks pretty good.

The Boiler offense wasn't the problem - though it was hardly earth-shattering - but Purdue's defense did the impossible: It made Jimmy Claussen look good.  The Emu threw for 275, Notre Dame added another 200 rushing, and Painter was unable to string enough of his 55 attempts together to keep up.  This, quite simply, is a bad defense and a bad football team.