Share All sharing options for: Iowa Basketball Ad Campaign Ignores Complete Lack of 2007-08 Highlights by Making Them Up

How do you market season ticket packages for a team that set the school record for futility?  By making up highlights:

The University of Iowa missed a slam-dunk in Sunday's Gazette with its misleading ad about the men's basketball team....

The copy declares that "Jarryd Cole's thunderous dunk brought the Buckeyes to their knees and the sellout crowd inside Carver-Hawkeye Arena to their feet," which must have been a special moment for the 6-foot-7 forward last season. There's just one problem. It never happened.

Cole wrecked his knee against Southeastern Louisiana on Dec. 29 last year and missed the rest of the season. He didn't play against Ohio State and never brought the Buckeyes to their knees. He dunked against someone, but it wasn't OSU.

OK, so somebody made a mistake. We all do. No big deal, right? Well, not exactly.

Rick Klatt, who runs the sports marketing department at Iowa, claimed it's a fictional ad that's meant to sell tickets, not a factual description of what actually happened in a game.  "It's not a mistake. No," said Klatt, an associate athletics director at Iowa. "It's an example of how the word 'slam-dunk' could be used in a sentence."  There was no attempt to deceive, Klatt said, although he acknowledged that some people might think Cole actually had a slam-dunk against the Buckeyes.

The press immediately criticized Athletic Department marketing director Rick Klatt for the first ad, so what was his reponse?  He made up another one:

Iowa's second full-page ad featured a picture of Hawkeye guard Jeff Peterson, claiming his steal against Illinois sparked a 14-0 run. There's a problem with that one, too. Peterson played against Illinois but was not credited with a steal, and Iowa never had a 14-0 run....The second ad tells fans that buying tickets and getting the $100 discount is a "steal." From Klatt's point of view, it's a harmless play on words. But according to the professors, the ad campaign is a big mistake.

Most people would take the criticism of two newspaper writers and a half-dozen journalism professors as a sign that they might have made a mistake.  Not Rick Klatt, though.  Late tonight, Klatt sent us his latest creation. Ladies and gents, a BHGP Exclusive: 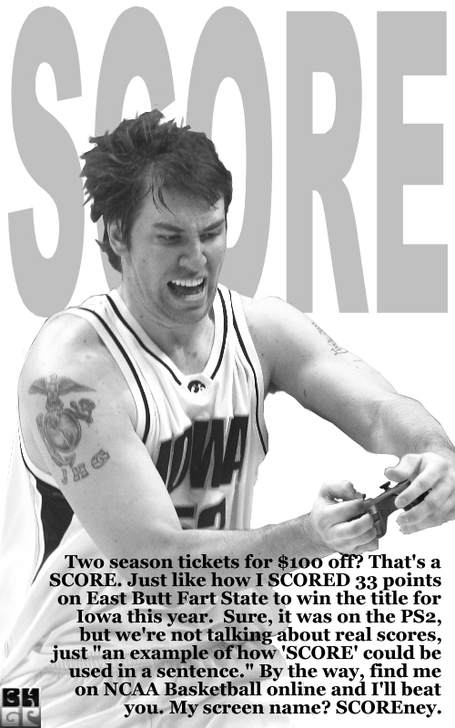