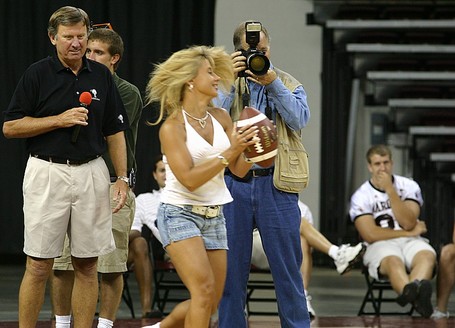 We finally have confirmation of what we've known for two weeks: Iowa has accepted an invitation to face the South Carolina Gamecocks in the Outback Bowl.  Bienvenido a Tampa.

The announcement came at approximately 5:00 CST, almost a full hour later than planned.  The incomparable Jon Miller has reported the delay was due to indecision by the Citrus (suck it, Capital One) Bowl, which apparently was seriously considering choosing the Hawks over Michigan State. What Jon doesn't know, however, is that Outback Bowl reps spent much of that hour on the phone with the BHGP staff.  In the wake of last year's PR disaster and subsequent MANCOTT, Outback reps wanted to guarantee this year's festivities would be far more successful.  We're not allowed to discuss the negotiations, but we can say this: A lifetime supply of Bloomin' Onions is enough to buy our silence.

As it is, OSU has apparently bought earned a BCS spot, likely at the Sugar Bowl.  MSU will play  Georgia in the Citrus Bowl.  LTP has confirmed Northwestern will face Missouri in the Texas Chainsaw Massacre Alamo Bowl (if you want to gloat, might I suggest sending an e-card?)

We'll have far more on South Carolina in the weeks to come, but as a quick primer:  They dropped their last two games by a combined score of 87-20, they just fired their offensive line and quarterback coaches, they aren't going to replace either coach until after the bowl game, and their sometimes-starting quarterback nearly got OPS fired.  If anyone ever deserved a January 1 bowl bid, it's this team.

UPDATE: Wisconsin-Florida State in the Champs Sports Bowl.  Minnesota-Kansas in the Insight.  No word yet on the Motor City Bowl, which was supposed to be between the MAC champ and the #7 Big Ten team but lost both tie-ins when Buffalo opted for the International Bowl and the BXI ran out of teams.  I'm hoping beyond hope for Notre Dame-Ball State.