Share All sharing options for: There's a Game on...um...Thursday? The Bloomin' Onion 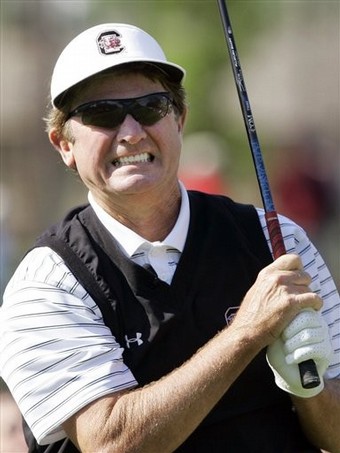 We've reached the end of the line.  Thursday morning, at the unholy hour of 10:00 CST, Iowa faces South Carolina in the Outback Bowl.  Last night, as a show of support, I finally ended the year-long MANCOTT and went to Outback for a steak and cheese fries.  They were scrumptious.

While we made penis jokes and discussed the inconsolability of Jamie Pollard, Garnet & Black Attack were writing actual football analysis.*  You want analysis?  I got your analysis right here (gestures toward crotch) (immediately regrets it).

Aside from some odd names in the offensive line two-deep (Adam Gettis? Kyle Haganman?), there is nothing new.  No significant injuries to report, though Andy Kuempel isn't listed.  Everything's coming up onions.

When South Carolina Has the Ball

South Carolina's run game makes Minnesota look like 1995 Nebraska.  Mike Davis, the former Indiana coach Cocks starting tailback, recorded only 571 yards on the year.  By way of comparison, Shonn Greene racked up 571 yards in the first half against Wisconsin.**  Not only are his numbers lackluster, but they have been in decline throughout the year, as South Carolina focused on the passing game; Davis averaged just over 40 yards per game in South Carolina's last six.  As a team, the Gamecocks average less than 100 yards of rushing per week, despite games against running back sieves like UAB, Kentucky, and Arkansas.  Against a comparable rushing defense - Tennessee - South Carolina put up just 101 yards on 44 rushing attempts.  While I fully expect South Carolina to stick with the run for as long as they possibly can, the running game is not a significant source of concern.

The passing game?  Well, it's Spurrier, so it's theoretically dangerous.  That being said, Danny Wuerffel isn't exactly walking out of that tunnel.  The Cocks' air attack is led by whichever one of two quarterbacks that isn't currently being berated on the sideline.  Chris Smelley, whose name is truly beyond reproach for its literal correctness, has been so thoroughly smelly for so long that fans are openly begging for the abject mediocrity of freshman gunslinger, graffiti artist, and unabashed hippie Stephen Garcia. 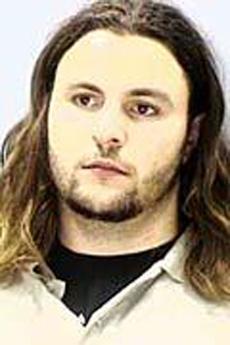 A friend of the devil is a friend of Stephen Garcia

That's not even mentioning the fact that the Gamecocks' bevy of shitty signalcallers has been preparing for this game without their quarterback coach, who was canned after the Clemson loss.  Garcia will apparently start, and will likely be pulled from the game, tasered, placed in a dog kennel, and flown to Vladivostok in the cargo hold of a C-130 by the end of the first quarter.

When their quarterbacks aren't smelly from the stench of patchouli - or just Smelley - South Carolina has a couple of decent receivers.  Senior Kenny McKinley racked up 48 catches for 554 yards this season, and his numbers have improved as the season progressed.  The same can't be said for junior tight end Jared Cook, who has been marginalized down the stretch.  As for the line, well, GBA apparently thinks they suck.  We're in no position to disagree.

Despite the turmoil, South Carolina was third in the SEC in passing offense this season, averaging 218 yards per game.  Yards were not a problem; interceptions were.  Smelley, Garcia, and third-stringer Tommy Beecher combined to throw 24 interceptions (only SMU threw more picks in D-I).  That trend doesn't bode well for the Cocks, especially against a defense that led the Big Ten in interceptions.  SC averaged just 21 points per game this year; I'd be shocked if they surpassed that number Thursday.

The Gamecock defense has performed admirably, given the staggering ineptitude of the offense.  South Carolina ranks 11th in the country in total defense, a whopping 0.6 yards per game better than Iowa.  They are 28th in scoring defense, due in no small part to the turnover machine on the other side of the ball.

South Carolina usually runs a 4-2-5 base defense, but will likely shift to a 4-3 out of necessity; two of their three starting safeties are out for the Outback Bowl.  While it's an admittedly subtle shift in philosophy in the season's eleventh hour, it might help shore up a Gamecock rushing defense that surrendered 129 yards per game on the ground.  The linebackers they've used throughout the year aren't your typical SEC linebackers.  For one thing, they're huge (both Norwood and Brinkley are over 260).  For another, they're very good inside.

The SC pass defense has been fantastic, ranked third in the country.  Not content to allow a meager 160 yards per game passing, the Cocks have racked up 30 sacks and a dozen interceptions.  It may be a byproduct of playing in a perpetual nickel formation against one of the most run-happy schedules the SEC has to offer, but it's impressive nonetheless.  In other words, don't expect too much from Slick Rick tomorrow (not that it will be needed).

I don't think there is any doubt that both these teams rely on defense to win.  That generally leads to a low-scoring slugfest, but South Carolina's defensive weakness (stopping the run) works to Iowa's advantage more than Iowa's defensive weakness (stopping the short pass) plays to South Carolina's offense.  If Greene gets his carries and yards (despite their meh numbers, South Carolina did a good job of stopping Knowshon Moreno, Arian Foster, and C.J. Spiller), Iowa takes this game handily.  If not, this has 6-4 final written all over it.  I'm betting on the former.