Share All sharing options for: Iowa State Goes Beyond Photoshop

So, Paul Rhoads.  I know nothing about him other than he was with McCarney for a while, so he likely has a deep-seeded hatred of Iowa.  He then was with Wannstache at Pitt, so he probably has a good idea how to lose to inferior opponents and save his job with one inexplicable victory over a ranked team late in the season.  He spent the 2008 season with Tuberville at Auburn and was fired by Chizik because, clearly, the disaster was all his fault.  He also once ate a ham sandwich so big, he barfed.

I was basically indifferent to this selection.  That is, until I checked cyclones.com this morning to find this: 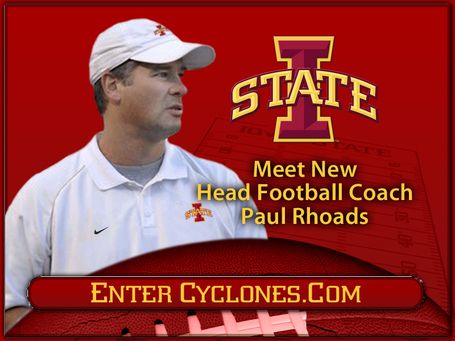 (Click to open the full size version in a new window. Seriously, do it, it's so bad.)

This is gloriously Beyond Photoshop.  Just look at the craftsmanship:

It really is fantastic work, a Van Gogh of our time.  I don't know who made this, but if there's no room in the Paul Rhoads administration for your talents, we will gladly give you a job here at BHGP.