Just Like Everybody Else, Jamie Pollard Is Not Taking This Well

[It is worth reiterating that with one of our first posts, we stated that we did not start this site to attack Iowa State. That remains true. That said, JESUS GOD DAMN CHRIST.]

To mangle the words of a genius, a good coaching change leaves everybody unhappy, and nowhere has that ever--ever--been more aptly demonstrated than the epic clusterfuck that has been Chizik to Auburn. Honestly, there's nobody other than Gene Chizik who's been happy about anything that has happened in this transition.

Auburn coaches: The assistants were on the road recruiting when they were cut loose, and their families were never told. This was confirmed by two wives who called into a local sports radio show, because apparently that happens at Auburn. How fucked up would it be to go recruit at a high school hundreds of miles away from home, only to have the coach tell you, "your boss 'resigned'"?

Auburn fans: This article has been removed from the new water carriers at AuburnUndercover.com (whatever the fuck that site is), but luckily an Auburn fan posted it at Clone Chronicles, and your money quote outweighs Fort Knox (emphasis ours):

It’s been less than eight hours since I put up the story that said Gene Chizik has jumped to the top of the list in Auburn’s search for a head coach to replace Tommy Tuberville. In that short period of time, the response has been the most negative I have witnessed in almost 40 years of being around Auburn football as a reporter.

Auburn players: If you think the athletic department is giving them any more freedom than someone named "Hiroki" in 1942, you are buttfucking insane. 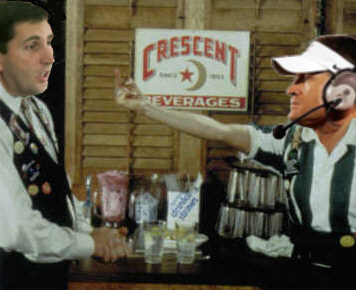 Iowa State fans: Exhibit A should be all we need. But how about Exhibit B? Or Exhibit C? Or--oh hell, let's just laugh.

"A lot of people asking me what I'm going to do with coach Chizik leaving. I understand business is business, but this man lied," Darks said in the video. "At a team meeting he was sitting there saying 'I told your mother, Jerrod Black, and I sat on your auntie's couch, Darius Dark, and I told her I would take care of you while you was up here at Iowa State.' Where's that n---- at now? Auburn University."

In the second video, Darks introduces Jeremiah Schwartz, who was a freshman running back from Florida who played for the Cyclones in 2008.

"I'm up here and I'm kicking it with some homies. I make some new friends, and got used to everything, and this n---- leaves," Darks said. "I’m still trying to go to the league. I understand a man gotta make moves for what a man gotta do. All you Cyclone fanatics that are going to be watching this, and everybody else that is going to be cracking up on this, the answer to what I’m doing…" (Darks puts on a Michigan State jersey) "…Michigan State."

So, then, let's add one more party to this list: ISU AD Jamie Pollard. When he said the following:

"Auburn’s interest in Gene speaks to his (Chizik’s) reputation," Pollard said. "We saw that same potential in Gene two years ago. He is an outstanding football coach, tremendous recruiter and inspiring leader. When your organization has talented staff members, other schools express interest in their services."

...we figured he was completely full of shit and trying to sell that stinker of a coach to Auburn, who dutifully complied by being the first team in history* to hire a coach on a double-digit losing streak to a new contract with a raise. But with the stage meticulously set for Pollard to gloat in his snow job on the Tigers of Auburn, he instead melted down in breathtaking, spectacular fashion:

"I know Jamie Pollard couldn’t do that to this place," Pollard said during his first public comments about Chizik’s departure.

Yes, he went Rickey. We're most stunned by the notion that Pollard meant anything he said in his first defense of Chizik, since it looked like a blatant smokescreen to get Chizik out of town while positioning ISU on the right side of the buyout. But no, Jamie Pollard is evidently personally and inconsolably upset about his 5-19 coach leaving.

Pollard choked back tears while recounting the events leading to Chizik’s exit, but offered few details about his plan for finding a successor.

“You know from the previous two searches how we’re going to do things,” Pollard said, referring to the hiring of Chizik and men’s basketball coach Greg McDermott. “I’m not going to answer questions. I’ll just tell you that’s where our energy is going to be spent until we introduce another coach.”

Yes, this is all real and happening right now. We're almost speechless here at BHGP. For years we truly underestimated the comedic value of Mr. Pollard, who hasn't appeared to be nearly the drooling halfwit that his predecessor, Bruce Van De Velde, was. But now? Automatic punchline. Just add "Jamie Pollard was inconsolable" to the end of any piece of bad ISU news (and for the Clowns, it's all bad news, 24/7) and it's instant comedy.

We still maintain a level of vigilance for insincerity and subterfuge, though; we've watched far too much pro wrestling to ever take a grown man at his word. And there is an unwavering doubt in our mind that maybe, just maybe, Pollard is pulling a fast one on us. And when he says things like this:

When Pollard was asked about Jacobs’ decision, he grinned before answering, “I give him credit for hiring a 5-19 coach.”

..we have no choice but to wonder. But at the same time, he wasn't really planning this the whole way; not when he actually offered Chizik a contract extension last month. [ed. note: in journalistic lingo, this is called "burying the lead."] He honest to god wanted Gene Chizik to stay at Iowa State. And now he's visibly upset that it's not happening.

I mean, that's it, that's the funny part. He loved Gene Chizik. We have nothing more to add.