In a motel room in Florida. A helicopter is parked above room 206.

Wow, that was the best sex ever!

It was good. Good like America. J's gotta sleep now.

But I want to talk to you and run my fingers through your luscious, flowing, All-American mullet!

I know, baby. Five minutes then I'm out cold.

Mmm. So soft. So what does the J stand for?

Of course, you're the real Captain America. Wait, what's this on the back of your neck?

What do you mean?

It looks like a... computer chip. Can I take it out? 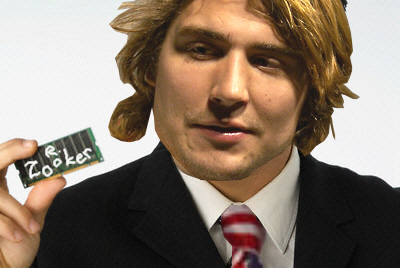 This is a Televiro CX400. We learned about these in Freedom Squad. You can control someone's mind remotely, just with a text message from any standard phone.

The chip reverses the cortex polarity and bypasses the neuron mainframe. Once the software decodes the text and pumps it onto your cerebrolobe, you're helpless. That text message makes you a zombie until your brain tells you the task is done. And there's only one person I know who prefers to get things done by text message. 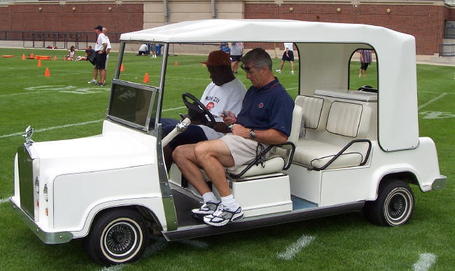 No wonder I blacked out between Freedom Squad and that shithole storage yard. He had me kill two innocent men. Two real American men.

I'm going back to Illinois. For Justice.

No, justice the concept, not Justice the Leman. I've got 14 bullets left, and I'm going to need all of 'em.

Sure thing, baby. First I gotta wash our love off me, then let's roll. While I'm in there, you let me know if I get any of those text messages.

You got it, Justice.

The bathroom door opens, and steam billows out.

Come get some lovin'.

Not now. We gotta drive.

At the football complex in Champaign...

That was a quick drive.

Always is when you're fueling up with freedom. Oh boy, here come the armed guards. It's about to get rough, baby.

You know who I am.

Yes we do J Reman. Come with us ow things wirr get vewy, vewy haiwy. You and youw rove srave don't want that, do you?

I'll tell you what I want:

He kirred him! Kirr him back!

I have to stop you!

You stay out, J! You just turn around and leave us be!

How about you leave this be.

You mean I don't have to be his love slave?

Oh no, honey. You think Joe Tiller's getting his rocks off with his secretary?

Well, no, I guess, but Ron's really insistent on it.

I guess so--oh shit, I think I hear shooting.

This is the third time this week! Champaign must be a total shithole. Call me later.

Ron, people are shooting people. Now is not the time!

Sorry, Zooker. We're all out of Chinese. How about some Freedom Fries?

Oh shit, it's J Leman! You killed all my guards!

You hijacked freedom and made it a bloodthirsty monster. You killed a real American, Bobert, your brother. And you killed the most decorated coach in college football history, Lou Holtz.

What?! Why the fuck did you kill Lou Holtz?

You told me to.

But he was right there with Bobert. You wanted me to kill Bobert.

Well yeah. Oh hell, this is too weird. Why don't you come by my office and we'll have a beer and talk about it, coach to player!

Get the gun, Secretary. Time to end this.

My name is Hot Blonde From Google Image Search. You can call me Myrtle.

Well it's great to meet you, Myrtle. You and J have sex yet?

Now look, J. A coach has things he needs to get done, and his players aren't there to question why or how, their job is to get the job done. You understand that, right? You're a soldier! You're in Freedom Squad! You don't second-guess the commanding officer!

This isn't Freedom Squad. This is Fascism Squad. And your brother just paid the ultimate price. I'm sorry, but I'm here to stop the Zooker's roll. Permanently.

You're out of bullets!

How in the hell are you still lying in a bed? Where did you get a bed?

Time to put you on your deathbed, Leman! Secretary, the gun! Now!

The doors are locked!

Goddamn it, Sugarpussy, when I tell you to do something, then

That's Mrs. Sugarpussy to you, Zooker.

If Lou sold us out, we're in trouble.  Believe me, a lot of trouble.

Has anyone been able to get in touch with Lou?

I've been trying all night.  He might be shacked up.

Lou never sleeps over with a broad.  He always goes home when he's through.

Give him a ring.

Hey, Jimmy.  I thought I told you to stay put.

Well the guys at the gates *cough* they say they got a package.

Yeah?  Willingham, go see what it is.

You want me to hang around?

Yeah, hang around.  You feeling alright?

There's some food in the icebox.  You hungry or anything?  How about a little drink?  Some brandy to sweat it out or something?

[Clausen gets a drink and exits]

Davie, I want you to take care of that son of a bitch right away.  Jimmy sold the old man out.  Make that the first thing on your list, understand?

Tomorrow, get a couple of guys, go over to Lou's apartment, wait for him to show.  Someone try Lou again...

What the hell is this?

It's an old Sicilian message.  It means Lou Holtz sleeps with the fishes.

[Charlie Weis angrily gets into his car and drives away.]

You get the hell away!

Wait a second, this isn't a tollbooth attendant, this is a Civil War cannon!

[Brains splatter across the windshield]

MISTER PATERNO WILL BE FINE THANK YOU

We've been sitting here for 25 minutes listening to this asinine fantasy, but now you're just ripping off The Godfather.  Can we talk about the polls?

I don't get what that means.

I ONCE HAD A POLISH LINEBACKER BY THE NAME OF PAUL POSLUZSOMETHING, AND HE HAD AN IQ OF RETARDED. WE HAD HIM CONVINCED THAT THE FOOTBALL WAS A SECRET WEREWOLF BOMB SO DANGEROUS THAT YOU COULDN'T EVEN SEE THE FUSE. WHAT YOU THOUGHT WAS A FIERY INTENSITY BEST SUITED FOR THE LINEBACKER POSITION WAS ACTUALLY A FRANTIC EFFORT TO KEEP THE BOMB FROM EXPLODING AND TURNING BOTH FRIEND AND FOE INTO WEREWOLVES

DON'T YOU EVER CALL ME A POLACK AGAIN YOU SPANIARD BASTARD

We're leaving. You have the worst press conferences ever.

GOOD JESUS WE OLD PEOPLE SURE ARE RACIST