Sure, Iowa just lost to the Illini, 27-24. But how much do we really know? What was really important about losing to Illinois? What does it all mean, Basil? The Takeaway has the answer. 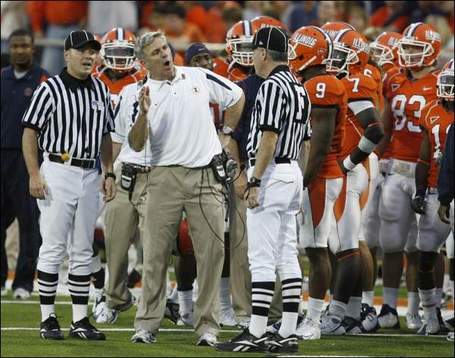 The Zooker proves his point with dance and impassioned lyricism.

This game was lost in the first half. Iowa had three red zone possessions in the first half. Their total scoring for those drives, and the half as a whole, was six points. You cannot win on the road like that. Sure, you can blame Ricky Stanzi's inexperience, and that's not altogether incorrect; the Manzi was 5-14 in the first half. But too often in the red zone, he wasn't put in position to succeed, especially on third down. His throws were both short of the first down marker and low-percentage; where did the roll-out game go? Why sit in the pocket and throw five-digs on 3rd and 8 when the receiver's in double coverage? 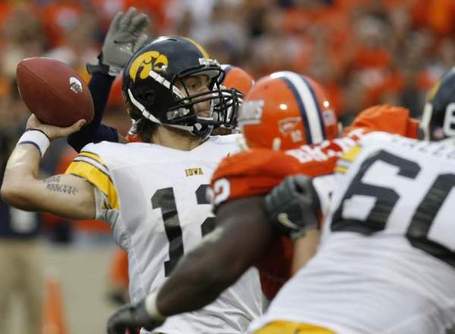 Worst. Statue of Liberty. Ever.

Granted, Stanzi didn't improve much in the second half. It wasn't until he coughed up the ball on the scoop-and-score (see above, vomit, rinse, repeat) that gave Illinois the 24-9 lead in the fourth quarter that Stanzi and the Iowa offense came to life. Also helpful: Illinois trotting out an obviously injured corner to abuse. Granted, it was great to see Iowa's offense come to life and finish off drives, but that cannot continue to wait until the 4th quarter--especially not against Penn State.

The difference between 2001 and 2008 is salary. Just like 2001, this is the first time in a few years that Iowa has enjoyed a distinct physical advantage with their opponents, but they're coming up just short. In 2001, 7-5 was awesome. It was positive. It was "we're not getting beating by Western Michigan this year!"

The problem, of course, is that Kirk Ferentz isn't paid for growing pains anymore. And when you get a situation like this where Iowa hasn't won their last 8 games decided by three points or fewer, that starts to become an indictment of the head coach. 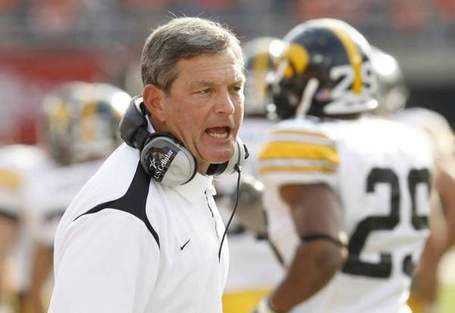 It's no exaggeration to say that Ferentz's job security depends on these last three games. Iowa is 5-4 right now, having lost those four games by a combined 12 points and winning those five by a metric fuckton. Iowa has no business winning the PSU game or losing to Purdue, so let's say we're 6-5 going into the last week at the Humpty Dump. One more 6-6 season with Christmas at home and we imagine Bloodpunch Barta's going to start wondering aloud to the press if it's not time for a change.

There's no point in missing the point. There are some notable details from last weekend's game; this time, it was a dinged-up ankle for Greene, a rare missed field goal for Mossbrucker (2nd all year), and an even rarer wide open long TD pass (1st all year, below). Whatever. 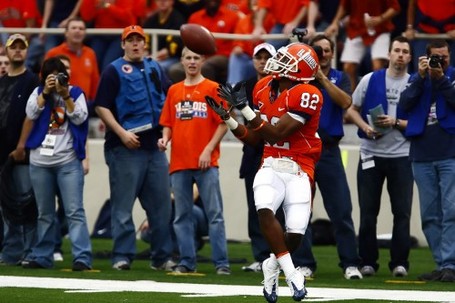 They're still details to a larger point: Going back as long as the seniors have been suiting up, the Iowa program has real, fatal trouble in close games. Coming into a game against a PSU team that's superior in both discipline and physical talent, that spells automatic loss this weekend. Don't let the 7.5-point line fool you--while Iowa's certainly capable of making the game competitive for all four quarters, there is very, very little to suggest they can come away from the game with an upset win.

For stars like Brodell, Greene, and King to suffer through this kind of a season is a travesty. Let's hope they can at least get to a bowl and win it to send the guys out on a high note. Step 1 is not giving up against Penn State.