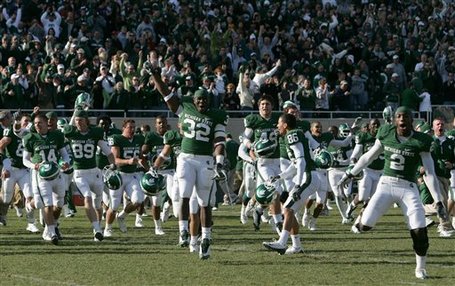 In a day of crazy finishes in the conference, a last-second go-ahead field goal was one of the least insane.  A 32-yard John Clay run gave Wisconsin an 11-point lead with 9:20 to play.  A touchdown and two field goals later - the last coming with 7 seconds left to play - and Michigan State escaped with a win.  It was a meltdown of epic proportions by Wisconsin, who completely dominated the first 50 minutes of this game.

Wisconsin also dominated the stat line.  They outgained Sparty by 118 yards.  They noutrushed Michigan State 281-25.  Ringer was held to 54 yards on 21 carries, Hoyer threw for 252 despite a sub-50% completion percentage.  Wisconsin only turned it over once.  It was exactly the kind of stat line Wisconsin wanted from this game.  At some point, you have to conclude that, no matter how many times they grab inexplicable victories against opponents who thoroughly outplay them, the tide is never going to turn against Michigan State.  Might as well ride the wave. 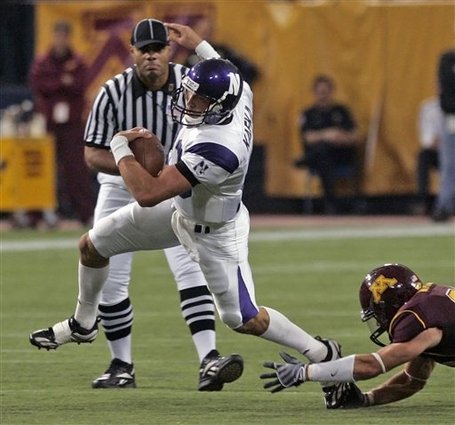 On the other hand, you have Minnesota.  The Gophers have lived by the turnover through eight weeks.  They died by the turnover Saturday in most glorious fashion.  Adam Weber threw a pass over the middle, which bounced off his receiver and into the hands of Northwestern defensive back Brendan Smith, who housed it with 12 seconds remaining to seal the win.

Northwestern backup quarterback Franz Mike Kafka was comically inept in C.J. Bacher's stead against Indiana.  He was a one-man wrecking crew against Minnesota, throwing for 143 wards on 12-for-16 passing and running for 217 YARDS.  Yeah, holy crap indeed.  Despite all the yards, however, Northwestern repeatedly stalled in Minnesota territory.  The kid has some things to learn, but if destroying Minnesota means something (and, this year, it kinda does), he's going to be one hell of a weapon for the 'Cats. 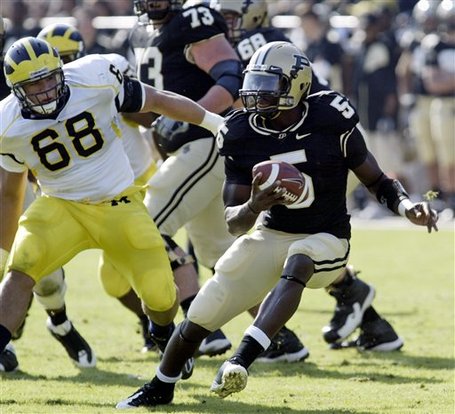 Purdue was playing its third string quarterback, a freshman who was playing halfback three weeks ago.  Michigan had its best offensive performance of the year so far (though Steven Threet had another day of fail, 9-for-21 for 123).  Brandon Minor runs for 155 and three scores, and is dangerously close to solidifying himself as the Michigan feature back in Sam McGuffie's absence.  So how does Michigan lose to arguably the worst team in the conference?

Did someone say hook and lateral?

Siller completed a pass to Greg Orton, who lateraled to Desmond Tardy and watched his teammate outrun Donovan Warren and, with 26 seconds, add to the LOLverines' trail of tears.  Siller finished with 266 yards on 21-for-34 passing with three touchdowns; either he's one hell of a quick study or Michigan's defense thoroughly sucks.

Sure, Central Michigan is pretty good and has arguably the best non-BCS quarterback in the country (hell, maybe the best quarterback, period).  Nevertheless, Indiana is a hot mess.  The battle for the Old Oaken Bucket might create that Earth-swallowing black hole the Hadron Supercollider failed to produce.  As for this game, I think it's safe to say nobody cares.

(All photos courtest of AP)