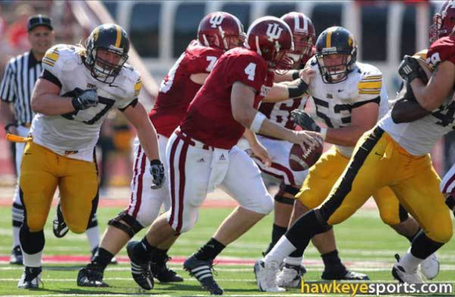 As if Greene's award wasn't enough, Mitch King is your Big Ten Defensive Lineman of the Year:

King became the first Hawkeye to nab Defensive Lineman of the Year laurels from the coaches since Jared Devries was honored in 1997. Other Iowa defensive linemen to be honored include Paul Hufford (1984), Dave Haight (1987) and Leroy Smith (1991). King's stout interior play helped Iowa lead the Big Ten in rushing defense for the first time since 2002 by allowing only 97.9 yards per game. The Hawkeyes also ranked third in conference play by limiting their opponents to only 16.2 points and 306.5 yards of total offense per contest. King led the team with 15.5 tackles for loss and added 51 total tackles, four sacks and a forced fumble in 12 games.

Again, uncontrollable sobbing to come later, but it was an incredible year by the defense in general.  King's numbers won him the award, to be sure, but the leadership and guidance he has given a remarkably young - and remarkably good - defense are what has stood out to those who know this program.  Kroul and Unusual Punishment held this entire team together when there were plenty of opportunities for it to enter a mid-season death spiral.  Congrats Mitch.