[Re-bumped from last year, just for the commenting shit-show that ensued. This is why you're just Northwestern.--OPS]

[Bumped. Northwestern may as well petition to get into Super Bowl XVI.--OPS]

Quit being foolish. Your team is not going to the Outback Bowl. And to be perfectly honest, if I was the Alamo Bowl I would take Wisconsin before NU. Then if I was the Champs Sports Bowl I would be super pissed that I got stuck with Northwestern.

In fact, if there was a Ditka Bowl presented by Rosario's Italian Sausage and it was played ON YOUR HOME FIELD, there's a decent chance that your team would not get invited. 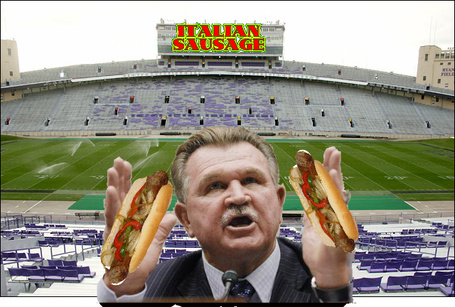 And listen, it's not even so much your team. They did what they needed to do in order to put themselves in this position. Congrats to them. They may be the worst 9-3 team in the nation/history of football, but by god they're 9-3. High fives all around.

The inherent problem is that you're smart. Maybe too smart. You KNOW that they're the worst 9-3 team in the nation/history of football and you KNOW that no matter what bowl game they are gifted that you are not going to it. In fact, you probably won't even bother to watch it on tv. Sure you'll be on winter break, but that's the best time to get a head start on the reading for your Biomedical Engineering classes next semester.

I don't need to tell you this, do I? You're smarter than me. You probably know all of this. I just want to get it out in the open so that when your team gets jumped for a bowl, you're not surprised and you don't complain.

You're not going to be all that upset anyway, are you? If you're really fired up about it you might write a well-versed and grammatically-correct letter with a number of bullet points to the selection committees, but I think that will be good for you. Therapeutic even. Just don't mention things like "attendance" and "quality wins" because that would be counterproductive to your argument.

Christ, listen to me......trying to tell you how to write a letter. Ridiculous. You know how.

Actually, you might be able to make the argument that the game against Iowa was a quality win, since technically your team WAS on the field when Iowa beat themselves, but I wouldn't push your luck......you have too many empty seats for that. 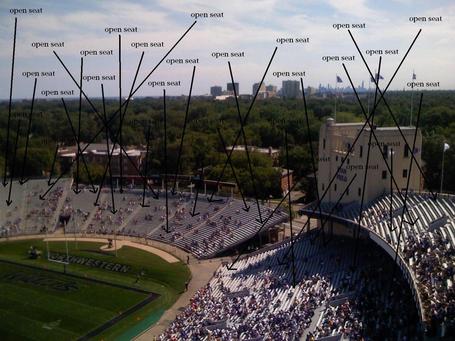 PS - In case you're wondering that last picture isn't a scrimmage or band practice or something like that. It's an actual photo of Ryan Field during a football game.