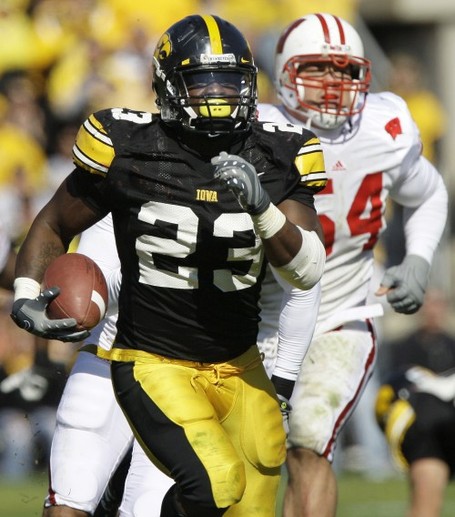 Eight months ago, the Iowa tailback depth chart was the visual manifestation of bleak.  Paki O'Meara was starting the spring game, for Christ's sake.  The outside world was laughing at our "magic ride into football absurdity."

Greene is the sixth Iowa standout to be named Big Ten Offensive Player of the Year, joining a group that includes Chuck Long (1985), Nick Bell (1990), Matt Rodgers (1990), Tavian Banks (1997) and Brad Banks (2002). The junior running back led the Big Ten with 1,729 rushing yards this season while scoring 17 touchdowns and averaging 6.2 yards per carry. He currently ranks second in the nation with 144.1 yards per game and is the only player in the country to rush for 100 or more yards in every game. He is the first Big Ten running back to surpass the 100-yard mark in 12 games since Northwestern's Darnell Autry in 1995 and the first to accomplish that feat in all eight conference games since Penn State's Curtis Enis in 1997. Greene's 1,729 rushing yards set a new school record while his 17 touchdowns are tied with Tavian Banks for the single-season best. Greene is a semifinalist for the Maxwell Award, given to the nation's top player, and one of three finalists for the Doak Walker Award, earned by the top running back.

I'm saving all the superlatives for the post-season wrapup, but suffice it to say you've just witnessed the greatest season by an Iowa halfback since Nile Kinnick (and, to be fair, it might be even better than that).  Thanks Shonn.