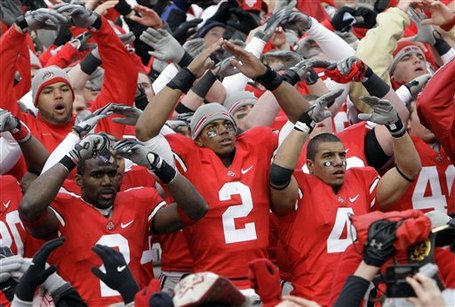 On a day of blowouts throughout the conference, this was probably the least surprising.  Ohio State entered the game a 20.5 point favorite - the biggest pro-Buckeye spread ever - and covered with ease.

Make no mistake about it: Terrelle Pryor, at least in this infant stage, leaves Ohio State a one-dimensional offense.  Pryor was just 5-for-13 passing for 120 yards, 2 touchdowns and a pick, and his yardage total was halved by backup Todd Boeckman in just three attempts.  Still, that single dimension is awfully damn impressive.  Despite Michigan's best efforts to stop Pryor (the most successful any team has been so far in stopping the freshman from running the ball), Beanie Wells and Daniel Herron combined for 214 yards on only 23 carries.  Against OSU, that is a recipe for disaster.

Michigan's offense certainly didn't help, and in fact looked worse than practically any other point this season.  Nick Sheridan, almost certainly starting his last collegiate game, went 8-for-24 for a mere 87 yards.  Michigan managed only 198 yards of total offense, coughed up two fumbles, and was an atrocious 1/17 on third down.  If the world was a just place, Zoltan Mesko would be sitting next to Shonn Greene at the Downtown Athletic Club in a couple of weeks; he was forced to punt an astounding 12 times for 438 yards, dropping three inside the 20 and keeping all 12 out of the end zone.  It was a punting tour de force that calls to mind the heyday of Jason Baker. 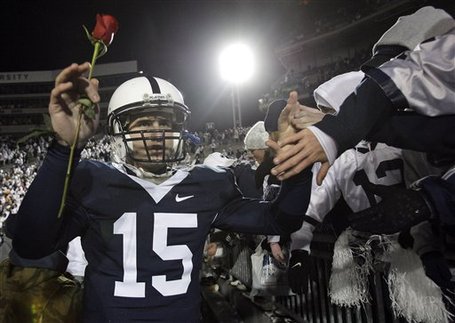 So much for the green wave.

Penn State jumped on Sparty early, building a 28-0 lead with two long drives and some opportunistic field position caused by a bad Brian Hoyer pick.  From there, it was never in doubt.  Michigan State added 10 points in garbage time to make the 31-point loss look a little more respectable.

Daryll Clark finally exorcised the demons of the Iowa loss and silenced the idiots calling for him to be benched, going 16/26 for 341 and 4 touchdowns.  Penn State was a ridiculous 13/17 on third down and rolled up 557 yards of total offense despite not having a 100-yard rusher.  It was exactly the kind of performance one would expect from a team that either (a) wants its head coach to come back or (b) wants to send him out on a high note.

Brian Hoyer actually improved his completion percentage, going 25-for-40, but his two interceptions haunted the Spartans.  Freshman Kirk Cousins filled in during the closing period and looked capable; of course, it was against Penn State's seventeenth-string defense.  Ringer was bottled up by PSU, going for just 42 yards on 17 carries.  This would be where we would tout the Heisman candidacy of Shonn Greene, but Ringer has already conceded the point. 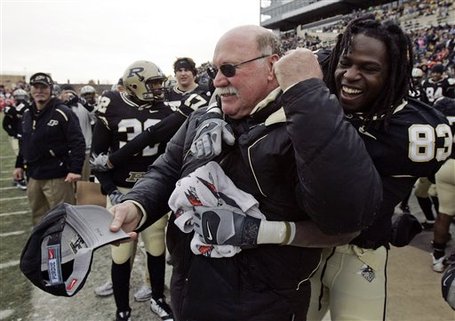 And so comes the end for two quarterbacks with tons of promise and mixed results.  I think it's safe to say that both Kellen Lewis and Curtis Painter were in large part a byproduct of their receivers.  Painter's performance plummeted in his senior year after losing four of his top five passcatchers, including Dorien Bryant and Dustin Keller (Tiller had called that group of receivers the best he'd ever coached).  Injuries took their toll on Painter, as well.

As for Lewis, he lost what might well have been the best Big Ten receiver in a decade.  He also damn near lost his spot on the team.  However, more significant for Lewis was almost unquestionably the shift in offensive philosophy away from his usual scrambling style.  Due in part to Bill Lynch, and in part to Lewis' ongoing injury problems, Indiana appears to be moving toward the pocket passer mentality of Northwestern and Purdue, just as the rest of the world moves the other way.  In any case, I'll be glad not to see either one of these guys across the sideline ever again; both Painter and Lewis were proven Iowa killers (particularly Lewis, who joined power rings with Hardy last season to hand Iowa one of the most embarrassing losses I can remember).  Good bye and good luck.

Finally, Joe Tiller was a crank.  He was a curmudgeon.  He steadfastly refused to put on a tie for any circumstance; I think the bastard got married in a gold Purdue golf shirt.  Yet there is no questioning his impact on the conference.  When Tiller came to Purdue from Wyoming, the talking heads said his pass-happy system couldn't work in the bitter cold and blinding snow of a Big Ten November.  Eleven years later, eight of the eleven Big Ten teams are running some sort of spread, with Purdue, Northwestern, Minnesota, and (to a lesser extent) Indiana working off the Tiller template.  That's not even mentioning the resurrection of Purdue, which had been a boiling pot of epic fail for 15 years before his arrival.  Enjoy your retirement, you sonofabitch. 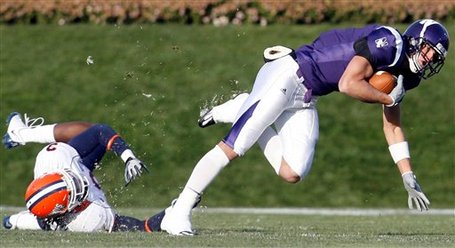 It was exactly the same game Illinois played all season (Juice throws a debilitating interception, the defense sucks, and they're running the option without a running back).  Of course Just Northwestern won.

So let's talk about this instead: What is Illinois' next mascot going to be?  Let's face the facts: Chief Illiniwek was finally retired last year (despite Phi Delta Douchebags' best efforts, he ain't coming back).  Now the Sweet Sioux Tomahawk is being retired.  By the end of the next decade, Illinois will take the lead of St. John's and Syracuse, and the Fighting Illini will be no more.  There are plenty of cool options; Sufjan Stevens wrote two albums about the place, any single track of which could be the jumping off point.  Of course, that means they'll become the Tigers.

The Mustangs ran for 276 yards, and Wisconsin only won because Cal Poly's kicker missed an extra point in overtime.

OK, now you can laugh.

(All photos courtesy of Associated Press)